You are here: Home › Our Blog › Your Health, Artificial Sweeteners & Healthy Alternatives
By Theresa Groskopp, CN on March 19, 2015 in Health News, Health Tips 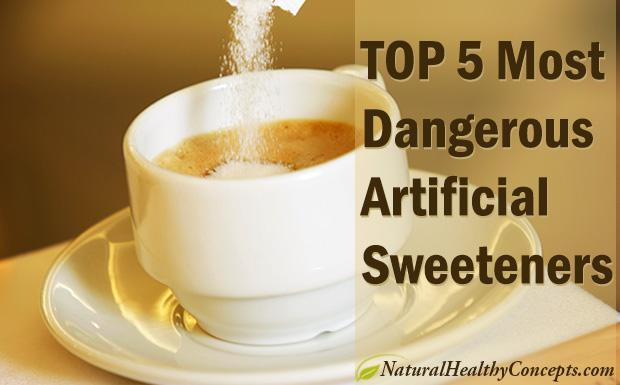 It’s pretty difficult to look around your local grocery store and not find a product that contains at least one artificial sweetener in it. Originally designed as less fattening alternatives to regular sugar, artificial sweetenersâ€”especially aspartameâ€”are regularly used (and sometimes even marketed) as the “healthier choices,” but are they really?

According to Dr. Mercola, “artificial sweeteners are added to about 6,000 different beverages, snacks, and food products” (Source). These 6,000 products contain one or more of only five artificial sweeteners available on the market today. However, none is “healthier” than the others. All five may be dangerous to your overall health.

As of this writing, there are five major artificial sweeteners on the market, all of which could beÂ bad for your health. What’s worse is that some are being hidden in foods and listed under different names to confuse us.

Likely the most common sweetener on this list and on the market today, aspartame was discovered on accident in 1965 by James Schlatter, who worked for G.D. Searle Company. In 1981, it was approved for use in dry goods, and carbonated beverages in 1985.

Used in everything from diet sodas and yogurt to pudding and chewing gum, aspartame “accounts for over 75% of the adverse reactions to food additives reported to the FDA” (Source). Reactions and symptoms may include headaches, heart palpitations, seizures, depression, vision issues, fatigue, and numbness, among others.

Sucralose, which is sold on the market as Splenda, is a derivative of natural sucrose and has been available on the market since 1998. The idea that “it’s made from sugar so it tastes like sugar” has made it one of, if not the top-selling artificial sweetener.

According to Dr. Mercola, “the chemical process to make sucralose alters the chemical composition of the sugar so much that it is somehow converted to a fructo-galactose molecule. This type of sugar molecule does not occur in nature and therefore your body does not possess the ability to properly metabolize it” (Source).

Discovered in 1878 by Ira Remsen at Johns Hopkins University, saccharin is a substance that is 300 times sweeter than regular sugar and is used in Sweet ‘N Low today. In 1972, “the FDA removed saccharin from the list of food additives generally recognized as safe,” (Source) and in 1977, it was banned. The Saccharin Study and Labeling Act passed that year, the ban was stalled, and sales of Sweet ‘N Low shot upward.

There’s no warning label requirement for foods that contain saccharin, and many people view it as a mild carcinogen (though, there seems to be no solid proof). However, people have reported reactions like headaches, muscle issues, breathing problems, and diarrhea after ingesting it.

Accidentally discovered by Karl Clauss in 1967, this calorie-free sweetener is now known as Sunett and Sweet One. The FDA approved it for use in 1988, but it wasn’t used in soft drinks until 1998. Acesulfame K is 200 times sweeter than sugar, and is used regularly in over 90 countries around the world.

It contains the carcinogen known as methylene chloride, which has reportedly caused side effects like headaches, mental confusion, vision troubles, and nausea.

Neotame can be considered aspartame on steroids. Because of its stability and ability to withstand higher temperatures than aspartame, it has been approved for use in a wider range of foods.

People have reported experiencing the same reactions, symptoms, and side effects as those indicated for aspartame.

The artificial sweeteners listed above are generally marketed toward diabetics and people looking to lose weight. Over the years, it seems that the phrase “zero-calorie” has become synonymous with “healthy” when it comes to weight loss. There seems to be pretty good evidence to the contrary, however.

“When you eat something sweet, your brain releases dopamine, which activates your brain’s reward center. The appetite-regulating hormone leptin is also released, which eventually informs your brain that you are “full” once a certain amount of calories have been ingested.Â However, when you consume something that tastes sweet butÂ doesn’tÂ contain any calories, your brain’s pleasure pathway still gets activated by the sweet taste, but there’s nothing toÂ deactivate it, since the calories never arrive” (Source).

While you may be bummed to hear all the negativity surrounding artificial sweeteners, there’s a wonderful light at the end of the tunnelâ€”there are healthy alternatives that are just as sweet!

Organic Maple Syrup from NOW Foods Â is an all-natural syrup with a deep, rich flavor. Pure and certified organic and kosher, it’s the ideal way to sweeten just about anything. It’s even great in coffee! Plus, you’ll receive antioxidant benefits, as well as iron.

Stevia, a naturally sweet plant extract has been used for a number of years as a healthy alternative to artificial sweeteners and processed sugar. NOW Foods offers Better Stevia Liquid Extract in french vanilla for a great-tasting, healthier alternative.

Light Agave Nectar from NOW Foods is 100% pure and certified organic. It boasts a light and mild taste that’s still pleasant, and is the perfect sweetener for coffees, teas, and other drinks. It’s also great on waffles, pancakes, and other foods!

Molasses may not boast many nutrients, but itÂ is just as sweet as the artificial sweeteners listed above. Produced from sugar cane and sugar beet, it may provide benefits like new cell formation and an immune boost.

Xylitol packets from NOW Foods is the ideal sweetener for people looking for a low-calories alternative to artificial sweeteners. Boasting 40% less calories than sugar, xylitol tastes just like regular sugar, but does not promote tooth decay or other health issues.

While artificial sweeteners may seem convenient, cheap, and sweet, the implications they may have on your overall health might be anything but sweet. Have you tried any natural alternatives? What are your favorites? Leave us a comment below and let us know!

One Response to Your Health, Artificial Sweeteners & Healthy Alternatives