You are here: Home › Our Blog › Workout Wednesday: Can Physical Activity Help You Sleep Better?
By Theresa Groskopp, CN on November 25, 2015 in Health News 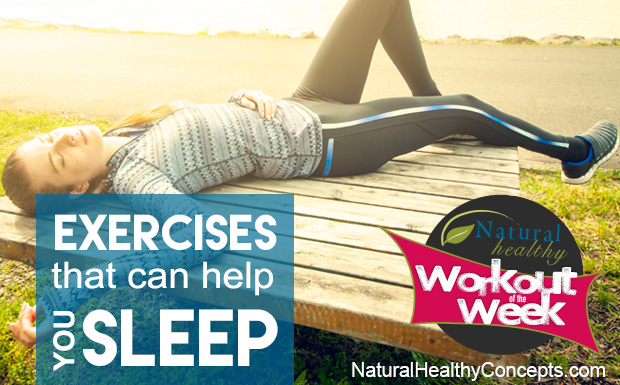 There’s been a bit of back-and-forth over the years about exercising before bed. First, it seemed to be a big no-no because the energy boost could keep you awake. Later, exercise was thought to be a good idea because it could wear you out and make you tired.

So, what do we believe? A new study offers a look into types of exercise that may contribute to better sleep. Let’s take a look at it!

An estimated 50 to 70 million adults in America have a sleep disorder (Source). Even the Centers for Disease Control and Prevention have said “insufficient sleep is a public health problem” (Source).

Everyone is built and wired differently. While exercise may help some sleep, it may keep others awake. The difference though, according to a 2015 study by the University of Pennsylvania School of Medicine, is in what you do for exercise.

According to the study:

Physical activities, such as walking, as well as aerobics/calisthenics, biking, gardening, golfing, running, weightlifting, and yoga/pilates are associated with better sleep habits, compared to no activity…” (Source)

Compared to those who reported that they did not get physical activity in the past month, all types of activity except for household/childcare were associated with a lower likelihood of insufficient sleep…” (Source)

Is this study telling you to avoid household chores? Of course not. Homes need to be looked after and children need to be taken care of, and those may be extremely stressful things for many people. However, fitting in a yoga sequence or two or a walk doesn’t seem to be a bad thing. In fact, it may even help you de-stress and sleep better!

Another study that appeared in the December 2011 issue ofÂ Mental Health and Physical ActivityÂ also looked at the positive effects that certain forms of exercise can have on sleep.

When using the activity guidelines for cardiovascular health, and then controlling for BMI, depression, age, smoking status, and general health status, researchers found the following:

The evidence is pretty clear, don’t you think? A lack of sleep has never been good for anyone. Get some exercise in before bedtime. You’ll be thankful in the morning!

What do you do to get a better night’s sleep? Let us know by leaving a comment below!