You are here: Home › Our Blog › Will Your Super Bowl Party be a “Fail Mary” for Your Diet?
By Theresa Groskopp, CN on January 18, 2013 in Health News 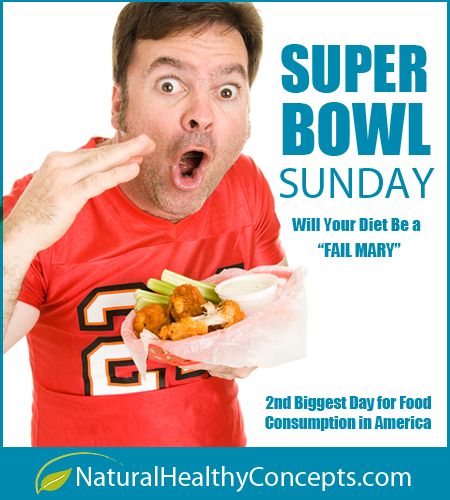 All the food and beverages served at Super Bowl parties, along with our low serotonin levels caused by the disappointing season of our favorite team, can make it a challenging day for those of us who made a New Year’s resolution to lose weight.

Trailing only Thanksgiving, Super Bowl Sunday is the second biggest day for food consumption in America, and the eighth biggest beer-drinking day. According to the National Restaurant Association, more than one-quarter of all Americans who watch the game will be picking up takeout food or having it delivered; another 12% will be going to a restaurant to watch the game.Â  Many more will be turning their house into a snack food factory that produces king-sized platters of chicken wings, pizzas, burgers, and more. To put it in perspective, in 2012, the Wall Street Journal estimated that Americans consumed over 1.25 billion chicken wings, 43.2 million lbs of tortilla chips, 71.4 million lbs of avocados, 111 million gallons of beer, and ordered 4.4 million pizzas from Pizza Hut, Papa John’s, and Domino’s on Super Bowl Sunday alone–that’s a lot of food!

When loaded with dressings and sauces, one chicken wing can contain well over 200 calories.Â  An average slice of pizza usually runs from 200-400 calories, depending on the slice size and the toppings. In a regular day, the average American will eat about 2000 calories worth of food, but during the Super Bowl, the average American eats that amount of calories in about three hours–mainly on snack food!

Most experts agree that a healthy person who gives into the seduction of beer, pizza, wings, and chips on Super Bowl Sunday will barely have any effect on their personal health-status.Â  But for the people who are insistent on trimming their waistlines and committed to their New Year’s resolutions, it can definitely be a “Fail Mary,” especially if you’re going to a Super Bowl party where you can be tempted to over-indulge. So, we’ve decided to help with some healthy tips and healthy (or healthier) Super Bowl snacks for the big game,Â  so you’re waistline doesn’t score any extra inches on game-day.

Tips Before and During the Game

If You’re Hosting the Game…

Naturally, if you’re hosting the game and you’re on a diet, you probably should make a conscious effort to serve healthier food! There are several ways to keep Super Bowl food healthy when you’re a host, mostly by making certain food substitutes and how you prepare the food:

On a Side Note…

Walgreens and other pharmacies are predicting a 20% increase in antacid sales throughout the weekend of the Super Bowl. Did you know that most people taking antacids because of heartburn or indigestion are actually misdiagnosing themselves? In fact, ninety percent of people with heartburn or acid reflux symptoms actually don’t have enough acid in their stomach–and shouldn’tÂ be taking antacids! Instead, try some natural digestive enzymes:

2 Responses to Will Your Super Bowl Party be a “Fail Mary” for Your Diet?