You are here: Home › Our Blog › A Tale of Two Industries – What Else Happened When Dr. Oz Went to Washington, D.C.?
By Theresa Groskopp, CN on July 9, 2014 in Health News 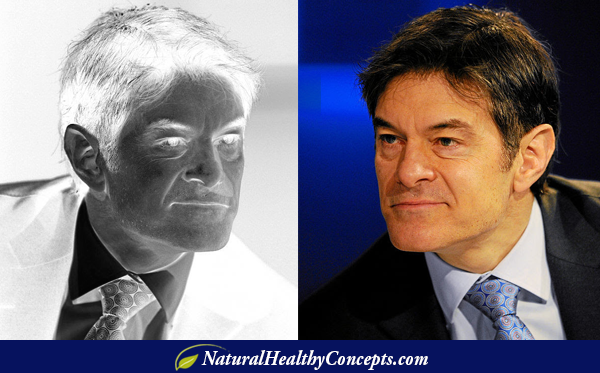 It was pretty big news in the natural health world when talk show host Dr. Oz showed up on Capitol Hill to get a grilling from Sen. Claire McCaskill, the chairwoman of the Subcommittee on Consumer Protection.

McCaskill said Oz was making unfounded claims about the effectiveness of weight loss supplements he features on his syndicated television program.

Not only was this story all over the news outlets – it also led to some scathing commentary about the supplement industry in general from comedian John Oliver.

On his HBO show Last Week Tonight, Oliver went on one of his trademark comedic rants about supplements and the way they are marketed.Â  (See the video here)

But you probably heard very little about who else testified at the same hearing in which Dr. Oz gave his testimony. McCaskill also invited representatives from the world of advertising and the natural products industry.Â  But their thoughts and opinions became a mere footnote in the shadow of Dr. Oz’s celebrity.

McCaskill basically gave Dr. Oz a public scolding for the kind of language he often uses to describe the products on his show – specifically natural products intended to promote weight loss.

Oz frequently uses words and phrases like “miracle, magic,” or “melts away fat.” And there are obvious concerns that describing a supplement in such a way is misleading – some would even call it a scam.

Watch a CNN Report on Dr. Oz’s Testimony in Washington

People in the world of natural health and wellness have differing opinions on Dr. Oz.

For one thing – he is certainly a force to be reckoned with. The so-called “Dr. Oz Effect” is something even we at Natural Healthy Concepts have noticed in the past. People are listening to what he has to say, and people are eager to try the products Dr. Oz recommends.

But not everyone agrees that Oz is always saying and recommending the right things.

In factÂ  – if you watched the video above – you probably noticed that even Dr. Oz admitted he needs to be more responsible about what he says on television.

And the key word there is – responsible.

What the Council for Responsible Nutrition Had to Say…

One of the other people asked to testify before the senate panel in June was Steve Mister – the president and CEO of the Council for Responsible Nutrition (CRN)Â  – a trade association representing many major supplement manufacturers in the U.S.

Mister brought up some very interesting points in his testimony – which you can read here in its entirety.

Here are three thoughts to consider:

1. There are two kinds of players in the nutritional supplement industry.

Mister admitted that there are scammers out there – people who want to make a quick buck selling something by making ridiculous claims.

However, he was also quick to point out that there are many other manufacturers basing their products on scientific research and who are committed to helping people in an honest fashion. Mister said…

“And that is the reality of the current weight loss market: it is a tale of two industries – with legitimate manufacturers who responsibly produce products that work and make claims for their products within the bounds of the law, and unscrupulous players who prey on desperation and the insatiable desire to be thin, and will say almost anything to make a quick profit.”

2. Weight loss in the USA is an extremely important issue.

Let’s face it. Americans are pretty fat. According to a 2013 Gallup poll, the majority of us (62%) are either overweight or obese and things are not headed in the right direction.

The responsible members of the supplement market understand that healthy living begins with making major lifestyle changes including proper diet and regular exercise. The greedy players in the market don’t care. But their false advertising also damages the reputations of companies that are being truthful.

Dietary supplements really can be useful tools in a weight loss program. Mister believes discrediting all supplements would be a mistake.

“The truth is that many dietary supplements, meal replacement programs and specially formulated foods can be beneficial as part of a weight management program. They can increase weight loss over diet and exercise alone, and can help people lead more active lifestyles that help to keep the pounds off.

At the same time, however, other products make outrageous claims that promise the weight will fall off without changing what you eat, and without exercise.”

Mister also mentioned that Americans spend about $40 billion a year trying to lose weight. $5.3 billion – or approximately 13.25% -Â  is spent on supplements and other natural health products. Something Mister called “only a fraction of the total, but still a significant sum.”

3. Action is being taken – but more needs to be done.

Mister also testified about what is being done – both within government agencies and the supplement industry itself – to police and monitor claims made about weight-loss supplements.

The CRN president listed many different actions including:

Even so – Mister told the senate committee it seems that for every false advertiser the FTC targets “two more pop up.”

Part of the problem may be consumer demand. Mister says Americans really do wish there was a miracle product for weight loss – and that’s the biggest reason weight loss products of any sort continue to be advertised that way.

“We believe that the challenge with weight loss products – whether they are dietary supplements, meal programs, clothing or gadgets – is that American consumers’ unrealistic yearnings for a magic bullet align with the temptation for unscrupulous marketers to take advantage of these desires with hollow promises.”

While he applauds the enforcement and awareness efforts so far – this particular representative of the dietary supplement industry agrees that more should be done.

Keep in mind – the people who are following the guidelines of the FDA and the FTC don’t have to worry. So what’s keeping those government agencies from enforcing the rules and catching the ones who should be worried? The FDA says they simply don’t have the time, money or resources. That’s why the bad guys can sometimes get away with it.

Steve Mister was solution-based in his testimony. He concluded with a four-step plan to help address issues with weight loss products and marketing:

1. Expanding and strengthening voluntary programs of regulation among manufacturers and marketers of weight loss products.

2. Increasing resources and priorities for the enforcement of legal requirements by both the FTC and FDA.

3. Calling on media outlets and online retailers to conduct their own advertising review before accepting advertising with claims that are illegal and simply “too good to be true.”

4. Educate consumers to be realistic about weight loss strategies and expectations to make them less vulnerable to outrageous and unsupported claims.

There are good guys and bad guys in the market of dietary supplements – especially when it comes to weight-loss products and the way they are advertised to consumers.

Is Dr. Oz one of the bad guys? We don’t really think so…

Hopefully, he starts to change his tune just a bit. But it’s important for you to remember that Dr. Oz has a TV show with advertisers to please and which strives to hit it big in the television ratings. For that reason, it won’t be easy to avoid hyping things up. Remember, stories about miraculously magical vitamins that melt away fat while letting you sit on your butt and eat whatever you want are exactly the kind of stories the American public wants to hear.

And to Dr. Oz’s credit – he has tracked down and even sued certain weight-loss product marketers who have used his name and image as an endorsement without permission.

It’s also important to remember that there are many companies promoting the right approach to weight loss and healthy living. They offer nutritional supplements as a helping hand – not an overall solution.

You will find many of the most trustworthy natural health brands available right here at Natural Healthy Concepts. It’s your responsibility to do some research and find the product that is right for you.

If you are looking for a little help losing weight – we encourage you to check out the Weight Loss Support Supplements offered on our website – because many of them really can help.

Think the supplement industry isn’t regulated at all? Think again! Check out our article – What You Probably Don’t Know About How Supplements are Regulated.

Plus, discover what clinical nutritionist Neil Levin had to say in response to John Oliver’s TV segment, which Levin says was unfair and unbalanced.