You are here: Home › Our Blog › What’s Your Beef With Raw Milk Anyway?
By Theresa Groskopp, CN on June 13, 2014 in Health Challenges, Health News 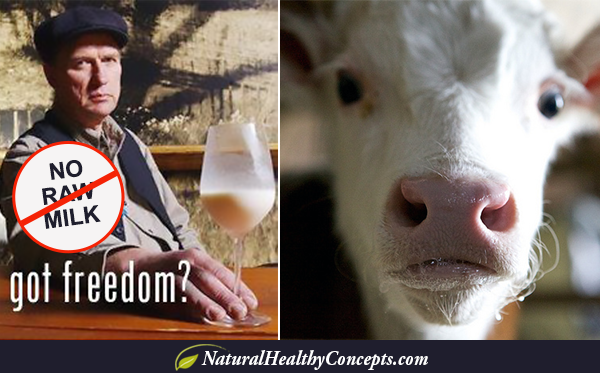 Years ago I spent time with friends in North Dakota who grew up on a farm. Raw milk was a staple in their home.Â I remember gagging at the sight of them pouring warmed cream over their peas. I wouldnâ€™t touch it!

I was ill-informed then – and today, I love raw milk.

My research and the countless anecdotal testimonies from raw milk drinkers have proven its value. I can hear some of you saying “No dairy, period!” Or, â€œWeâ€™re the only species who drink milk from other animals.â€ So?

Iâ€™m not crazy about vegetarian diets, but Iâ€™d defend your right to be a vegetarian.Â This is about food freedom.

It’s aboutÂ my right to drink raw milk if I want.

I think properly produced and handled raw milk is extremely healthy – and Iâ€™m not alone. Dr. Mercola, Chris Kresser, and the Weston Price foundation confirm raw milkâ€™s benefits. And based on the popularity of raw milk in the US, so do hundredâ€™s of thousands more.

No one will convince me otherwise.

I live in Wisconsin, a.k.a., “The Dairy State,” and here the dairy industry rules.

Got milk? You betcha!

We even have an official Green Bay Packers cheese. I love milk and cheese â€“ Iâ€™m almost addicted to them. Except for the cream I put in my coffee at a restaurant, Iâ€™m very particular about the milk I consume.

The Politics of Raw Milk

The whole issue of drinking raw milk has become a political firestorm, locally, and around the country. I know countless raw milk drinkers and Iâ€™ve never heard one of them say they got sick from raw milk. This whole thing is udderly ridiculous! Pun intended.

The laws on raw milk vary from state to state. In Wisconsin you can purchase milk directly from a farm, but not at a farm market or a store. There are 11 states that allow the retail sale of raw milk. You can buy it in some vending machines in France! Oui! Oui!

Let’s be clear: Iâ€™m not saying you should run out and drink raw milk from just any farm. I’m referring to properly produced and handled raw milk. Exercise good judgment and know the farm where you get your milk.

You can learn everything you need to know about raw milk from RealMilk.com and the Weston A. Price Foundation. 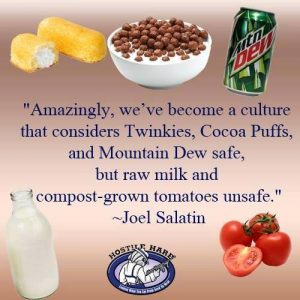 Safety concerns are the biggest reason given for why people shouldnâ€™t be allowed to drink raw milk – but thatâ€™s baloney.

After attending a legislative raw milk hearing in Eau Claire, Wisconsin – a few years back – I know this is really all about politics and industry control.

There were over 50 of us who rode a coach bus to the hearings in the wee hours of the morning. Hundreds packed the small auditorium and 90% of them were raw milk advocates.

They were from all walks of life. Farmers, natural healthcare providers, and everyday people like my husband and I, looking for our right to choose the food we think is best for our families.

At least half of the panelists on the committee grew up on raw milk and had positive things to say about it. There were naysayers in the audience, but more pro-raw-milk supporters and plenty ofÂ  great testimonials supporting the health benefits of drinking raw milk.

All in all, the hearings were very positive and we were all cautiously optimistic to see the government loosen it’s grip on the sale of raw milk. Even before the hearings, then governor, Jim Doyle, alluded to the fact that he was going to sign the bill.

Our hopes were crushed however, when just before the end of his term, the Governor vetoed the bill. The Milwaukee Journal Sentinel article said,

More baloney. He sold out. He now works for a law firm that coincidentally manages sizable legal matters for the food & beverage industry.

Think pasteurized dairy is so safe?

Here’s an excellent article from the Complete Patient whereÂ author David Gumpert points out the double standardsÂ of the media, CDC and FDA, whenever there is a reporting of a food-borne illness from dairy. If the source is from raw milk, they ramped up the fear factor and harm to the victims, but if pasteurized milk is to blame, things are conveniently glossed over.

Between 1945 and 1997, there were 21 cases of US documented outbreaks of food-borne illness from pasteurized milk that affected (drum-roll please) 250,963 people.

Did you get that?

Thatâ€™s a quarter of a million people sick from pasteurized milk.

You can see the full list of outbreaks and learn more on the hazards of pasteurized milk in this article from CheeseSlave.com.

And what about the food borne illnesses from produce and meat that make so many people sick?

In this article from the Healthy Home Economist, over a 14-year span from 1998 â€“ 2012, there were 10 deaths and 50 illnesses caused by listeriosis. Cantaloupe infected with listeriosis killed 33 people in 2011 and sickened 147 others.

According to the American Nutrition Association, each year aroundÂ 48 million people get sick, 128,000 people are hospitalized, and 3,000 people die from food borne illnesses.

Thatâ€™s a lot of sick people â€“ but whereâ€™s the outrage over that?

Why doesn’t the governmentÂ send heavily armed swat teams to the big factory farms and food processing plants like they do to the homes of raw milk farmers? Is there an agenda against raw milk farmers and consumers? Read more here: The Raw Milk Crackdown on the Most Peaceful Among Us.

According to Livestrong.com, in accordance with the 2009 Food Code – restaurants are allowed to serve raw or under-cooked foods per the customerâ€™s request as long as the customer understands the risks and they arenâ€™t part of a high-risk group. This means you have the right to eat your sushi, your rare burger and your runny eggs.

The definition of a warning is to alert you to a “possible or impending danger, problem, or other unpleasant situation.” If you eat any of these foods, you run this risk.

Any raw fruits or vegetables you eat have the potential to cause harm – even something you grow in your own yard.

No one is making them illegal.

Given the low incidence of harm from raw milk, why shouldn’t raw milk drinkers have the same rights as someone who likes to eat a slab of raw salmon?

According to data collected by the Wisconsin Raw Milk Association, you are 35,000 times more likely to become sick from consuming other foods than from drinking raw milk.

How much more convincing do you need? 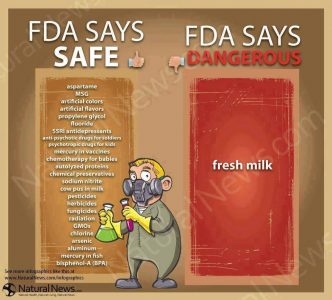 The FDA has approved more dangerous foods and ingredients than you can shake a stick at. Legally prescribed, properly-dosed prescription drugs kill over 100,000 people annually, but raw milk remains the big bad bogey-man of food.

If you ride a motorcycle in Wisconsin, you don’t need to wear a helmet…

But the National Highway Traffic Safety Administration says 29% ofÂ  deaths could be reduced if more people wore helmets. Why is that okay, but drinking raw milk is too “risky?”

Many wonder if this more about industry and government control of our food, rather than safety.

Some of my friends don’t want more laws passed to regulate the sale of raw milk. They believe it’s better to keep things as they are now. They might be right. Maybe we’re just better off keeping the government out of this. Look how messed up our food system is and how sick we all are.

If you believe people have the right to eat the healthy foods of their choosing, find out how you can help.

Everything in life has risks. We should all have the right to eat the foods we want.

Raw Milk Reality: Is Raw Milk Worth the Risk?

No Deaths in 38 Years from This Raw Milk –So Why is it Condemned?

One Response to What’s Your Beef With Raw Milk Anyway?