You are here: Home › Our Blog › What You Need to Know About PEDs
By Theresa Groskopp, CN on September 1, 2014 in Fitness & Exercise, Health News 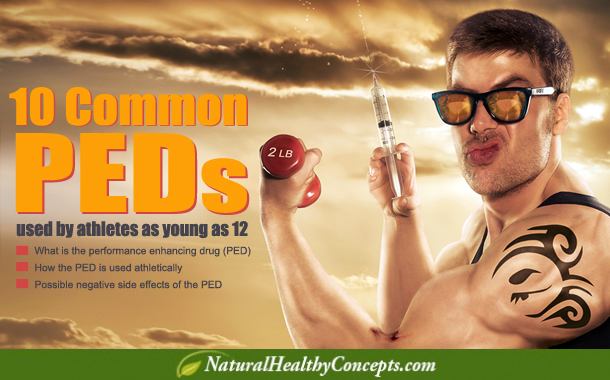 Performance-enhancing drugs–PEDs to most people–are seemingly everywhere these days. Baseball, football, cycling, track and field. It’s hard to find many major sports where PEDs have not been an issue. Some of the biggest names in these sports have been “found out.” That is, they’ve been caught using PEDS, whether it’s through a failed drug test, self-admittance, or some other means (many of the cases have been discovered because of former teammates and coaches testifying to witnessing the PED use).

Barry Bonds, Mark McGwire, Ryan Braun, and Alex Rodriguez are just a handful of the big names in Major League Baseball. Marion Jones, Justin Gatlin, and Tyson Gay are only three of many track stars who have tested positive for PEDs over the years. Chael Sonnen, Nate Marquardt, Chris Leben, and Tim Sylvia all fought in the UFC, and all four tested positive for PEDs at least once (and Sylvia has stated that he thinks an estimated–and mind-boggling–90% of MMA fighters use PEDs).

And who could forget Lance Armstrong, the seemingly invincible cyclist who beat cancer and came back to win the Tour de France an astounding seven times? Armstrong had been the subject of many doping allegations throughout his career, but miraculously never tested positive for PEDs. In the summer of 2012, it all came crashing down (even though he had retired a year earlier). The United States Anti-Doping Association (USADA) handed him a lifetime ban for using PEDs. He was stripped of his record seven Tour de France titles, as well as his bronze medal from the 2000 Olympics in Sydney. He never admitted to doping until September 2013, when he did so in an interview with Oprah Winfrey.

There’s no doubt about whether the use of PEDs has spiked over the years. Just watch your nightly news, and you’re bound to see something at some point. Most of what we see on TV involves professional athletes and, in most cases, big names.

But what about everyone else?

PED Statistics: A Popular Pathway to Edging the Competition–Even at a Young Age

Yes, you read that right.

Even at a young age.

According to a July 2014 article in The Guardian:

These are scary statistics for kids so young.

An article by Dr. Michael F. Schafer on the website for the American Academy of Orthopaedic Surgeons states these alarming statistics about PED use among teens:

The World Anti-Doping Agency (WADA) was established on November 10, 1999 in Lausanne, Switzerland and has been headquartered in Montreal, Quebec since 2002. Its main purpose is “to promote, coordinate, and monitor the fight against drugs in sport.”

WADA’s World Anti-Doping Code (WADC) was implemented on January 1, 2004, and has been adopted by over 600 sports organizations around the world, including the International Olympic Committee (IOC). The MLB, NFL, NBA, and NHL haven’t adopted the WADC because they managed the anti-doping policies of their own respective sports.

Every year, WADA revises the list of what it deems to be performance-enhancing drugs and methods. A new substance is added to the list if it meets two of the three following criteria:

The list covers substances and methods that fall into the following categories:

Because many medications can contain substances on WADA’s list, an athlete suffering from a condition or illness that requires the use of these types of medications must apply for a Therapeutic Use Exemption (TUE). This is basically a free pass to take the required medication, but in order to be granted a TUE, the athlete must back their claim with the proper medical documentation. The application process isn’t easy, but can be done. In many cases (especially in the world of the UFC and mixed martial arts), TUEs are granted.

View the infographic below highlighting 10 common PEDs, uses and potential side effect.

What about Dietary & Nutritional Supplements?

According to the WADA website, they are not involved in testing dietary or nutritional supplements: “…WADA-accredited laboratories shall not engage in analyzing commercial material or preparations (E.g. dietary supplements) unless specifically requested by an Anti-Doping Organization as part of a doping case investigation.”

As a result, it’s always a good idea to exercise caution when using dietary and nutritional supplements. Because many countries have different rules regarding supplements, banned substances may not always be declared. Over the years, a number of PED-positive tests have been the result of supplement misuse.

Do your homework when considering nutritional supplements. Poor labeling and “I didn’t know” are never adequate excuses, especially when given as a defense in a case hearing.

Performance-enhancing drugs are never safe. Sure, they’ll increase performance, but at the same time, they’re likely decreasing your health. In many cases, PED use can even shorten your lifespan. Curious about the negative effects PEDs can have? Â You can read all about them here.

Cheating the system has been happening since the 1960s. Athletes have been getting caught just as long. Don’t risk your health for the sake of winning. As we’ve seen from the downfall of so many athletes, PEDs just aren’t worth it.

What are your thoughts on performance-enhancing drugs? Are sports leagues/teams/governmental bodies doing enough to keep banned substances from sports? Leave a comment below. We’d love to hear from you!