You are here: Home › Our Blog › What Is Myrrh Used For? Science and History Explains
By Theresa Groskopp, CN on March 2, 2018 in Diet, Nutrition Supplements 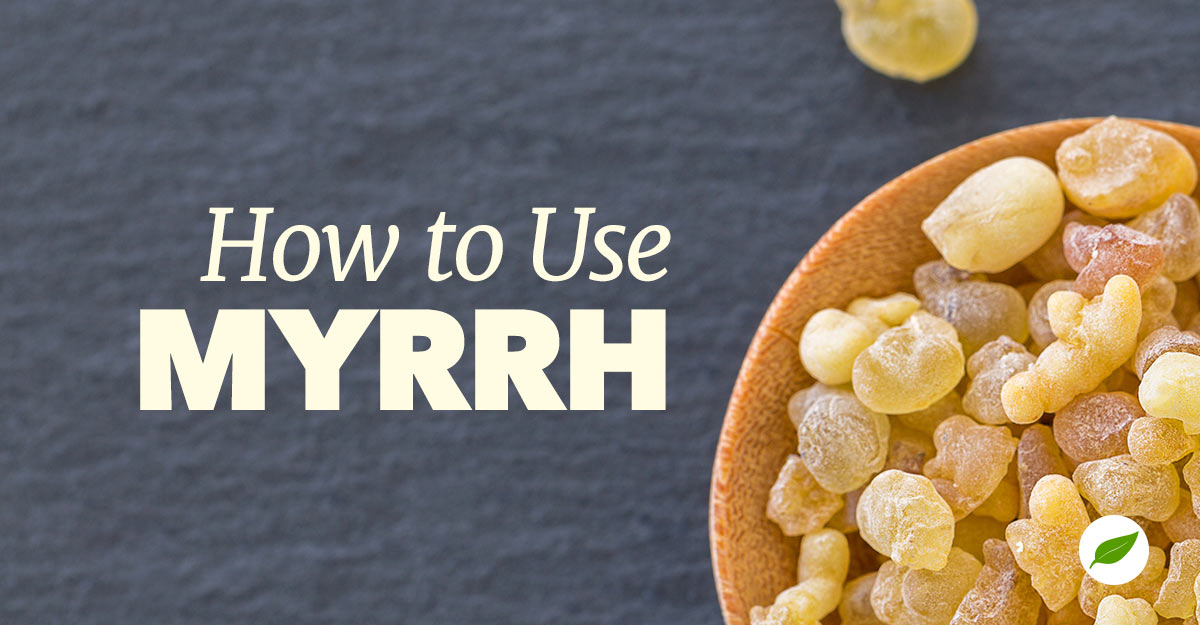 Have you ever wondered what is myrrh used for? And what made this plant-derived substance so precious that the wise men in the New Testament gifted it to the infant Jesus? After years of research, scientists may have some answers. While myrrh may be best known for its use in ancient rituals, scientists have found that myrrh may have several potential healing properties as well. Read on to learn more!

Myrrh is derived from the gummy sap that comes from Commiphora trees when they are cut. After the trees are cut, the sap leaks out and hardens on the bark. The hardened sap is then used in its dried form or steamed to create essential oils.

Myrrh has a history that stretches back thousands of years. While myrrh was regarded as a medicinal substance in many ancient cultures, there is also evidence that it was burned during religious ceremonies by Babylonians and Assyrians. According to the Bible, myrrh (as well as frankincense) was part of the holy incense that was burned in Jerusalemâ€™s temples.

Over time, myrrh fell out of favor with religious groups, in part because incense became associated with pagan rituals. However, many cultures have continued to use myrrh for its potential health benefits. Today, modern science can back up some of these potential benefits thanks to new research studies and widely available myrrh products, including essential oils and supplements.

What Is Myrrh Used For?

Myrrh has several uses â€” however, not all of them can be proven with scientific research. While some studies have been done to confirm the potential benefits of myrrh, other uses have a long history that has been passed on from generation to generation. Here are some examples of what myrrh is used for:

While researchers havenâ€™t examined the benefits of using myrrh to promote healthy-looking skin, this is one of the oldest uses of myrrh oil. In ancient times, people used myrrh maintain healthy-looking skin and prevent signs of aging. It is also said that myrrh can help soothe chapped or cracked skin.

This is one area where researchers have taken a strong interest in myrrh oil. In an animal study, researchers found that myrrh could protect against liver damage due to its ability to support the immune system. While this study was limited to animals, researchers believe myrrh may provide potential benefits to the human immune system as well.

Sesquiterpenes are one of the primary active compounds in myrrh. Research shows that sesquiterpenes have an impact on the hypothalamus, which helps people to feel calm or relaxed. You can potentially achieve this effect by adding a few drops of myrrh to a hot bath, or book an aromatherapy massage where myrrh is used directly on the skin or through a carrier oil.

Another study found that the use of myrrh can provide support in the instance of stomach ulcers. Historically, myrrh was also used to provide relief for an upset stomach, indigestion, or diarrhea.

Ancient societies used myrrh to provide support to people with wounds or infections. Research shows that myrrh has anti-bacterial properties, which can help keep cuts, sores, or infected areas of the skin clean.

How to Use Myrrh Oil

If youâ€™re interested in using myrrh oil, youâ€™re in luck â€” itâ€™s pretty easy to get started! Visit Natural Healthy Concepts to look at our wide range of myrrh products. While we offer high-quality myrrh essential oils and blends, you may also be interested in myrrh gum supplements or an ointment for a specific issue (such as a diaper rash on your little one).

If youâ€™re interested in trying an essential oil, you can generally use myrrh oil as you would any other type of oil. Consider putting myrrh into an oil diffuser so you can inhale the properties from this potentially healing oil. You could also apply it directly to the skin if promoting healthier-looking skin is one of your health goals. Just remember to mix myrrh with a carrier oil, such as unscented lotion or grapeseed oil. If you are experiencing muscle pain, consider adding a few drops of myrrh to a cold compress before placing it on the skin. Consuming essential oils is not recommended.

While there is still a lot of research yet to be done on the potential benefits of using myrrh, you may find that myrrh helps you achieve your personal health goals. If you use myrrh, share your experiences in the comments below!