You are here: Home › Our Blog › What Does Gluten-Free Actually Mean, Anyway?
By Theresa Groskopp, CN on April 9, 2015 in Health News 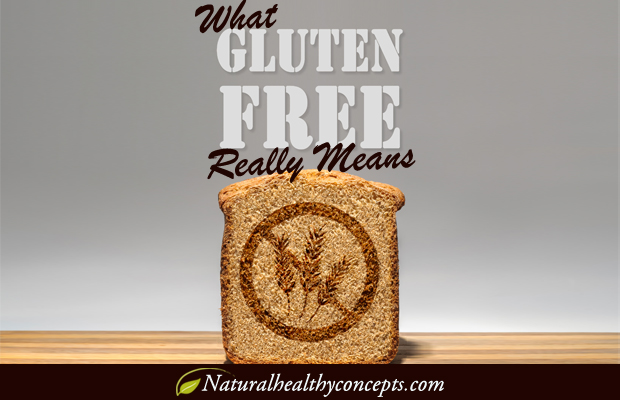 It’s pretty hard to go to a grocery store or corner market and not see products that are labeled gluten-free. If you’re celiac like me or suffer from gluten intolerance, seeing this label more often probably makes you pretty happy. After all, more gluten-free labels mean more food options.

It seems that anything and everything is labeled gluten-free these days, doesn’t it? Crackers, mac and cheese, beer, pasta, and even water are just some of the grocery items bearing this wonderful little label. Whether you suffer from celiac disease or gluten intolerance, are avoiding gluten to maintain a healthier diet, or are just generally curious, the question remains the same: What does gluten-free actually mean?

Defining the Term “Gluten-Free” in Food

According to the FDA, a food can be labeled gluten-free if one of the following is trueÂ (Source):

This may seem confusing, and it is, especially for those of us who just want to be able to eat without having to worry about getting sick. To understand a little better, let’s talk about this rule that gluten-free food manufacturers are required to follow.

The Basics of the Gluten-Free Labeling Rule

Items covered by the rule include any food products subject to FDA regulation, dietary supplements like vitamins, minerals, herbals, and amino acids), as well as any imported foods that are FDA-regulated. Items not covered include malted beverages that contain malted barley or hops, meat, poultry, unshelled eggs, and any other items that are regulated by the USDA, and distilled spirits and wines that have a alcohol content of 7% or more (by volume).

Many foods that bear the gluten-free label can contain as much as 20 parts per million of gluten, which is considered a trace amount. According to Dr. Amy Burkhart, the 20 ppm cutoff “is based on a study done in 2007 that showed this level to be safe for the majority of people with celiac disease” (Source).

If you’re anything like me, 20 ppm might leave you a little confused. It took me quite a while to figure out just what it meant for my diet and my body. To keep you in the know, below are some quick facts from the Gluten-Free Dietitian (Source):

While some products may contain up to 20 ppm of gluten, there is a wide range of others that may test to 10 ppm, 5 ppm, or even lower. Other products are certified gluten-free, and depending on which program has certified the products (either the Gluten-Free Certification Organization, the National Foundation for Celiac Awareness, or the Celiac Sprue Association), they will contain 5 ppm or 10 ppm.

Because we’re all different and our bodies respond to gluten in different ways, what makes one person feel sick, may not do the same to another person. The Center for Celiac Research states that “10 milligrams per day of gluten consumption is a safe levels for the vast majority of individuals with celiac disease … 10 milligrams is roughly the equivalent of one-eighth of a teaspoon of flour, or 18 slices of bread with each slice containing 20 ppm of gluten” (Source).

Manufacturers of gluten-free food products regularly test their products to maintain compliance with the 20 ppm rule, and many products test below that limit. However, if you find that a product with 20 ppm of gluten is still making you feel sick, it might be a good idea to avoid it. A lower trace amount may not affect you, but it all depend on your level of sensitivity.

Many people prefer the limit be set at 10 ppm or 5 ppm. What are your thoughts? Do you react to foods containing 20 ppm? We’d love to hear from you. Please leave us a comment below!

Workout Wednesday: The Fat-Burn Kickboxing Routine
Get Nutty in the Kitchen…with Pecan Recipes

One Response to What Does Gluten-Free Actually Mean, Anyway?