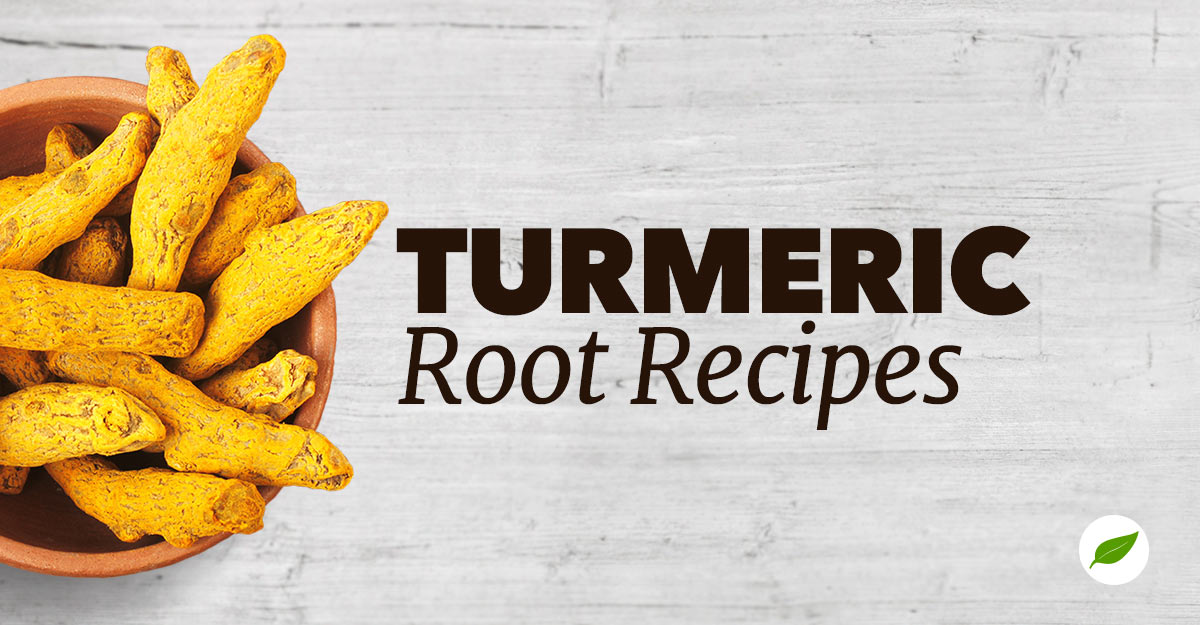 Try these nutritious turmeric root recipes to support your health.

â€œTurmeric looks like an ugly cousin of ginger.â€ At least thatâ€™s how Ellen Brown, founding food editor of USA Today, once described the plant in an article in the Providence Journal. Though turmeric itself might not be as worthy of still-life art as perfectly shaped pineapples, pears, and persimmons, turmeric root recipes can be just as delicious. And they may be just as healthy, too.

Have you ever wondered where curry and yellow mustard got their vibrant yellowish hue? You can thank turmeric (Curcuma longa) for that. â€œThe powerful part of turmeric is found in the bright orange color itself,â€ Brown says. The pigment, called curcumin, is a bioactive antioxidant that promotes a healthy immune system and has relatively few potential toxicity problems, depending on the medications youâ€™re taking.

Though turmeric was first used as a textile dye, it has been a staple in Chinese and Indian medicine for thousands of years for such ailments as fatigue and liver issues. It has also been used in Ayurvedic medicine â€“ one of historyâ€™s oldest whole-body practices of medicine â€“ primarily in South Asia. Today, according to the National Institutes of Health, turmeric is used in dietary supplements to support healthy digestion, cognition, cardiovascular function, skin health, mood, joint health and more. It can be found in powder, capsule, tea, or extract form.

Beside its potential health benefits, turmeric also tastes good as a spice when cooking. You can clean, dry, and ground turmeric root and rhizome powder, or you can eat purified turmeric raw. Brown describes it best: â€œThe flavor of the fresh root is brighter than that of the dried, and it has a peppery punch to it. The fragrance is mild, and reminds me of a cross between orange and ginger.â€

If youâ€™re curious about what turmeric root recipes are lingering on the internet, look no further than Pinterest to provide a wide variety of results. From teas to tonics, soups to golden milk, and even turmeric garlic dill pickles â€“ yep, thatâ€™s a thing â€“ youâ€™re sure to find a delicious sounding recipe to try out in the kitchen as a way to work turmeric into a healthy diet.

Here are three of our favorite recipes.

Turmeric root is a versatile addition to your cooking arsenal. It doesnâ€™t have to be reserved for just chicken or vegetable curry; it can be a nice addition to several different dishes.

Side Dish: Roasted Radishes and Carrots With Turmeric. Have you ever roasted radishes? Neither had Erica Hale until she checked out a specific recipe book from the library. â€œI went on a vegetable quest, trying new vegetables out and venturing into new territory with old veggie friends,â€ Hale said. â€œThatâ€™s when I first roasted a radish, and Iâ€™ve been doing it ever since!â€

Soup: Turmeric and Coconut Roasted Butternut Squash Bisque. Emily Kyle had a bountiful harvest of squash taking up space in her basement when she was inspired by the cover of a cookbook lying around after a remodel. â€œIt seems that everyone has a butternut squash soup recipe on their website these days,â€ Kyle said, â€œbut I wanted to share my special twist as well.â€

Smoothie: Creamy Banana Turmeric Smoothie. EatWell101 believes that â€œyummy and healthy are not mutually exclusive.â€ And we would tend to agree. Their creamy island-inspired smoothie lists turmeric root as an ingredient and as a garnish.

Do you have a favorite turmeric root recipe? Weâ€™d love to hear about it in the comments below!