You are here: Home › Our Blog › The Potential Benefits of Triphala Fruit
By Theresa Groskopp, CN on August 10, 2017 in Health News 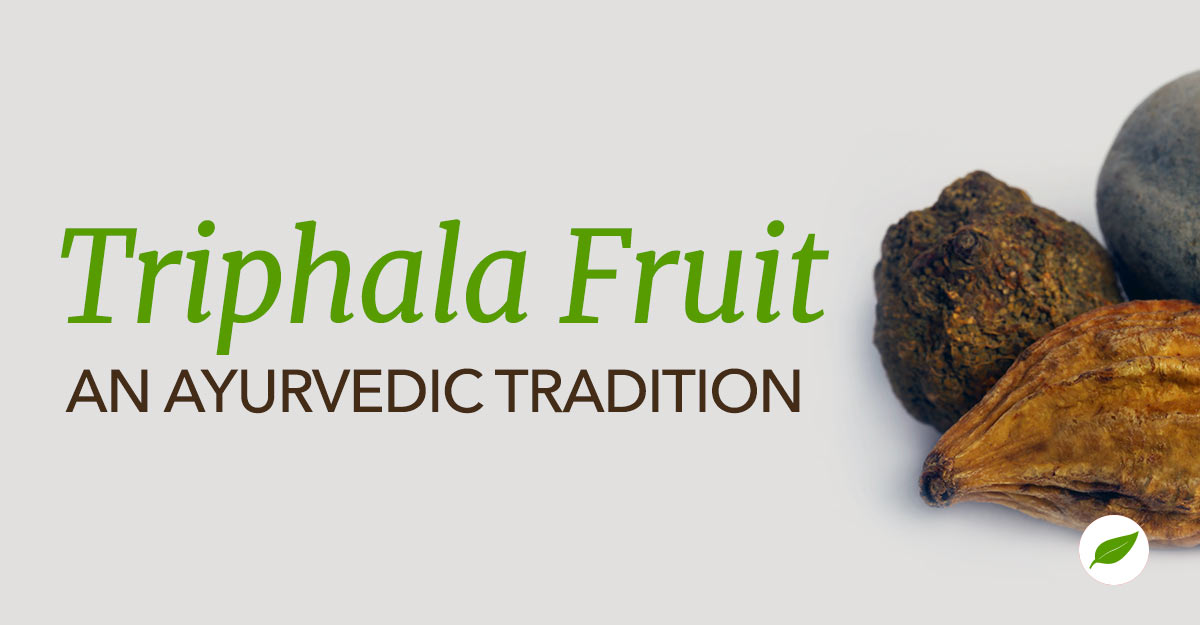 The three triphala fruit include amalaki, bibhitaki, and haritaki.

If you are a reader of this blog, you likely already know about the potential benefits of the ancient preparation of triphala. What might be more unfamiliar are the individual fruits that go into this traditional preparation: amalaki, bibhitaki, and haritaki.

Exotic and largely unknown in the Western world, each triphala fruit is central to Ayurvedic tradition, but may deserve expanded awareness. Weâ€™ll discuss each fruitâ€™s individual characteristics, and finish with a reminder of the potential health benefits that are unlocked when the three are combined.

Amalaki – This ancient fruit takes its name from the Sanskrit language. Even when Sanskrit was a spoken language, amalaki was already recognized for its apparent effects on health. The delicious fruit goes by many names in various parts of the world, including: emblic, emblic myrobalan, myrobalan, Indian gooseberry, malacca tree, or simply amla.

The mature tree can grow anywhere from 3 feet to 26 feet high in India and surrounding nations. Itâ€™s broad palm-like leaves are deciduous, dying and growing back in season. Amalaki berries are produced through the spring and summer, ripening in the fall. By itself, the berries are sour and bitter, but Indian culture has developed numerous preparations that make it palatable, both for food and medicine.

The amalaki tree and fruit have religious significance in Hinduism and Buddhism, as well as religious offshoots like Ayurveda. The fruit is said to have been a gift of the Indian emperor Ashoka to the Buddha himself.

Bibhitaki – Also known as bahera, beleric, or bastard myrobalan, this fruit-bearing tree is a common sight throughout Southeast Asia, where it is often planted beside roads. The large leaves are sometimes used to feed farm animals, if hungry caterpillars donâ€™t eat them first.

The fruit and its nuts (â€œbedda seedsâ€) have a variety of common uses in Ayurvedic medicine. On its own, the pulp of the fruit is believed to support a healthy respiratory system.. It may also provide support for bowel regularity and abdominal comfort. The seeds are said to be mildly narcotic, meaning they may support a healthy mood and behavior; but the seeds are not normally found in triphala.

Haritaki – Also known as black myrobalan or chebulic myrobalan, this third triphala fruit is found in South India, Nepal, China, and the rest of South Asia. The tree can grow to about 100 feet in height, which can make harvesting the green fruits something of a challenge.

Harvested before they are ripe, various traditions use the fruit and pulp for medical purposes and for food. In Ayurveda, the fruit and seed are both equally important, rumored to provide benefits for a variety of bodily processes and ailments.

Haritaki is sometimes called the â€œking of medicinesâ€ in Tibet, where it is also used to dye fabrics and tan leather. These widespread applications have motivated a number of studies to learn more about the chemicals in haritaki. Though many interesting compounds have been identified, researchers have yet to understand which ones account for haritakiâ€™s impressive reputation in the East.

Each triphala fruit is said to have great importance individually, but itâ€™s when they fruits are combined into triphala that Ayurvedic texts start to sound exciting. Stories from around the world hint at triphalaâ€™s support for digestion, immune system support, detoxification, support for blood sugar levels already within the normal range, and potential for eye disease.

We live in a time when these potential benefits are not limited to those who live in parts of the world where each triphala fruit grows. If you are interested in beginning a triphala regimen as part of your healthy diet, try it as a powder or tea and see if it makes a difference in your life!