You are here: Home › Our Blog › Top 10 Uses of Sea Buckthorn Seed Oil
By Theresa Groskopp, CN on May 28, 2013 in Health Tips, Nutrition Supplements 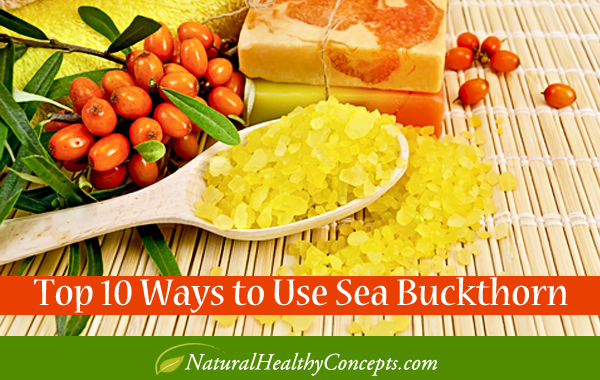 The Sea Buckthorn Berry is probably one of the top nutritious fruits that exists because of it’s sea buckthorn seed oil. Clinical trials in various countries confirm the nutritional and medicinal value of the Sea Buckthorn Berry. This ancient fruit contains 190 active nutrients including Vitamins A, B1, B2, C, D, E, K, carotenoids, flavonoids, amino acids, phenols, folic acid, and 20 different minerals.

To top it off, it is the only plant known to contain Omega 3, 6, 9 and 7. Sea Buckthorn Oil is the best vegetarian source of omega 7. The berryâ€™s unique composition of essential fatty acids and vitamins offers many therapeutic uses and benefits in addition to the well-known topical use for beautiful skin.

In one study, Tori Hudson, N.D. reports participants took 2 grams of sea buckthorn oil for three months. Tear film samples before and after the study showed that the fatty acid profile of the tears didnâ€™t change, but it did have a positive effect on dry eye symptoms and redness. Terry Lemerond states that artificial tears don’t address the structural reason for dry eyes. Omega-7 works systemically, from the inside, for dry eye relief.

Omega fatty acidsÂ help support the structure of skin, mucosalÂ membrane layers in the digestive system,Â vagina, and cells throughout the body.Â Terry Lemerond ofÂ TerryTalksNutrition.comÂ explains how the Omega 7 helps cells retain moisture, especially in the eyes, mouth and vagina.Â Terry says, “Those with SjÃ¶grenâ€™s syndrome, an autoimmune disorder with excessive dryness in the eyes, mouth and vagina, can especially benefit from Omega 7 supplementation.”

One human clinical trial showed that after three months of supplementation, there was a decrease in markers of systemic inflammation. It is thought that inflammation is reduced by controlling pro-inflammatory mediators. More Human Clinical trials however are needed.

Gastric ulcers and Gastroesophageal Reflux Diseaseare (GERD) are more common than ever. I am certain you know at least one person who is using a medication like Prilosec to control their indigestion or Reflux. Terry Lemerond says, “Oral Sea Buckthhorn use soothes the mucousal tissue in the digestive tract and helps prevent and heal gastric ulcers.

The Journal of Biological Science Review also states sea buckthorn is traditionally used in the treatment of gastric ulcers.Â Jon Barron, MD, mentioned the benefits ofÂ Palmitoleic Omega-7 unsaturated fatty acids (found in sea buckthorn oil) with regard to digestive health in his article about the Five Scientific Myths About Fat.

A double blind clinical trial of 128 patients with ischemic heart disease were given 10 Mg of the oil, three time daily for six weeks. The patients had a decrease in cholesterol level, reduced angina and improved cardiac function. However the Natural Medicines Database does state the evidence in this trial is insufficient to rate as effective.

Due to the potent antioxidant power of sea buckthorn, in oneÂ study, “the findings suggest that Sea Buckthorn oil has a potent hepatoprotective activity, reducing the concentration of aflatoxins in the liver and diminishing their adverse effects.” The oil also helped to normalize liver enzymes and serum bile acids in anotherÂ clinical study.

Perhaps the most controversial use of the berry is for weight loss.Â Dr. OzÂ made this claim famous in 2011 after the results of aÂ studyÂ were published on how different berries have various but positive effects on metabolic diseases of overweight and obese women.Â Â Dr. Oz Show claimed that omega-7 fats in the oil inhibit fat storage howeverÂ Berkely WellnessÂ said there was no evidence to support this.

TheÂ Berkely Wellness articleÂ states that, “Lab studies have shown that sea buckthorn has antbacterial, anti-inflammatory, and anti-clotting effects. Thereâ€™s some evidence it can promote skin healing, boost immunity, improve cholesterol, and inhibit colon and liver cancer cells–at least in mice and test tubes.” Twenty-eight different cases of skin burns and scalding were treated with sea buckthorn oil and were purported to have increased skin regeneration and had “magic effects” in treating the burns.

The study doesn’t state whether it was topical or oral use. The study sounds to me as though the oil was used orally, but it seems to me both applications could be beneficial. Â Sea Buckthorn Oil benefitsÂ include anti-aging as it promotes skin hydration, elasticity and skin regeneration. The berry’sÂ botanical name is Hippophae which means shiny horse; implying it’s beauty applications.

TreatingÂ Acne with Sea Buckthorn Oil was another segment onÂ Dr. Oz. Since sea buckthorn berry seed oil is an anti-inflammatory and antibacterial, it certainly makes sense that it can be helpful with treating acne and acne prevention. The previous article on the therapeutic uses also references the benefits of topical and internal use for skin healing and regeneration.

Rosacea is a chronic inflammatory condition causing facial redness and small, red bumps and is frequently mistaken for eczema or acne. Again, the anti-inflammatory effects of Sea Buckthorn Berry Oil may be beneficial for rosacea.Â Sea Buckthorn contains more than 10 times the amount of vitamin C found in oranges offering maximum amounts of antioxidants.

TheÂ SeaBuckthorn InsiderÂ shares, “Antioxidants protect the cell walls and DNA structure. It also improves the skin texture and pigment distribution.” The internal and external benefits of this berry put it in our top super food list. As of this writing, there is no set recommended daily allowance for omega-7.

Studies have suggested sea buckthorn oil supplements (as the best plant & vegan source of omega-7) in the amounts of two to five grams, depending on the condition being treated. As always though, check with your healthcare practitioner. Omega-7 is also available in limited amounts in properly extracted wild alaskan salmon oil as found in the supplement Wholemega from New Chapter. Do you want to look younger, have better skin, Â and support healthy mucous membrane tissue in the eyes, mouth, digestive system and vagina? Look no further and check out the best-selling sea buckthorn oil supplementsÂ for internal use.