You are here: Home › Our Blog › The Truth About Drug Companies
By Ashley Steinbrinck on September 5, 2013 in Health News, Nutrition Politics 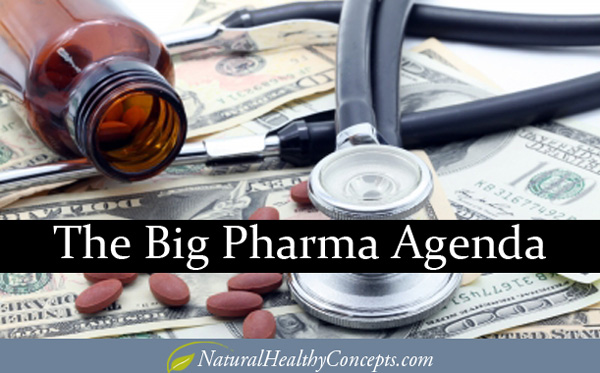 For example, the massive drug company, Eli Lilly, has just been ratted out by a former senior manager of the company for giving out $4.9 million to bribe doctors to prescribe Lilly products over their competitors. Â This wasn’t the only shady thing this company has done. They’ve also been in trouble in 2009 for off-label uses and for hiding the fact that death was a side effect for a drug they were promoting to children and the elderly. If you want to more about this, read the full article.

This also isn’t the only allegation these big time companies had to deal with. There have been many others. All sorts of bribery and hidden truths go on behind the scenes that most of us innocent, at times ignorant (since we don’t research ourselves) and sometimes very gullible consumers don’t know about.

Did you know that pharmaceutical companies spend 10Â billion a year to market their drugs? (Source) WhileÂ Americans are spending $200 billion a year on prescription drugs, growing at a rate of 12 percent each year.Â (Source)

But that $200 billion doesn’t even reflect the large amounts spent for drugs administered in hospitals, nursing homes, or doctors’ offices. In most analyses, these costs are allocated to the costs for running those facilities. (Source)

Why do we have such blind faith in the pharmaceutical companies, when they’ve proven time and again that they can’t be trusted. Do we believe what we hear because government agencies like the FDA paid by Big Pharma back them up? How much profit do you think the government sees? They’re all in it together, and they think they’ve got us wrapped around their billion dollar finger. Sly guys.

Did you know that big wigs like Bill Gates, who promotes GMOs (a cause for infertility) and owns over 500 shares of Monsanto stock, have connections with these drug company operations? He and others are on a mission to depopulateÂ the world.

Check out this video clip of Mr. Gates himself stating that “we can reduce the world population by 10-15% with vaccinations.” Did you know the polysorbate 80, a toxic chemical in vaccinations, leads to infertility. That’s one way to depopulate I guess. Did you ever wonder why every other day someone tells you they are trying to get pregnant and they can’t?

Did you know that Dr. Oz himself says “When I go home, I’m Mr. Oz – not Dr. Oz and my wife is not going to immunize our kids.” Yet, Dr. Oz still urges his followers to get vaccinated. Check out this video clip with Dr. Oz exposed on what his family really does when it comes to immunization.

It’s a fact that Dr. Oz has a financial stake in the drug industry. But he’s not the only public influence that gets paid out by Big Pharma. There are plenty of others.

Do you ever stop and ponder the reasons for the crazy unhealthiness of our country today? Most of us just accept that that’s the way it is. But, it’s not. There’s a reason why there are more school shootings, more depression, more ADHD, more autism, a massive increase in children’s “mental disorders”, a huge increase in obesity, cancer, diabetes, etc.

My good friend is a veterinarian who tells me she gets paid a commission based on the amount of prescriptions she gives to her patients. Yeah, these patients are cats and dogs, but it’s not too far from how it works behind the scenes of any mainstream hospital.

Here’s a quote from Marcia Angell M.D. who wrote the book,Â The Truth About the Drug Companies.Â Regarding the pharmaceutical industry, she says –

“Now primarily a marketing machine to sell drugs of dubious benefit, this industry uses its wealth and power to co-opt every institution that might stand in its way, including the US Congress, the FDA, academic medical centers, and the medical profession itself.Â (Most of its marketing efforts are focused on influencing doctors, since they must write the prescriptions.)”

And mainstream doctors make great sales people. They hardly have to sell us at all. They just prescribe the drug and we go pick it up. Or, we might see one of those drug commercials with happy, beautiful people and tell our Dr. we want to try it – regardless of the seemingly endless list of side effects.

Why?!Â Why do people just take a drug before researching it, or before trying to figure out a natural alternative, or even doubting the fact that they really need it?

Many of the health conditions that doctors prescribe medications for can be easily fixed by diet and nutrition alone.

Why do we put so much trust into what the Dr. prescribes, when there are betweenÂ 106,000 – 196,000 deaths each year in the U.S. alone fromÂ properly prescribed drugs. With more than 2 million suffering serious sideÂ effects. (JAMA, 1998). This stat was taken from 1998. Can you imagine what that number really is today.

There are even new warning labels on OTC drugs like Tylenol, because there are more than 450 deaths per year just from acetaminophen usage.

I do feel that one day people will finally come to know the truth about the agenda of the pharmaceutical industry, the government and all the people on their team. But with money comes power and in this case it is unfortunate that the money and power rests Â in the hands of some pretty messed up human beings.

I want this post to be a warning for you. I want it to strike a simple thought in your mind to start being an investigator for your own health and your children’s health.

Don’t take my word for it though, do your own research. Once you dig into the facts you’ll find the truth.

Over-Medicating Our Children…Abuse By the Pharmaceutical Industry?
The Secret to Weight Loss and HIIT (High Intensity Interval Training)

3 Responses to The Truth About Drug Companies