You are here: Home › Our Blog › The real reason cola and cheese puffs are cheaper than fruit and veggies
By Theresa Groskopp, CN on June 5, 2012 in Nutrition Politics 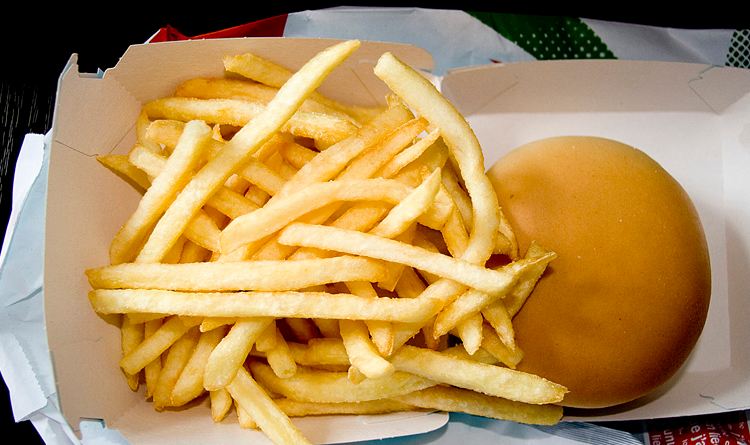 If you only have a few bucks in your pocket, you can always get something yummy off the dollar menu at the drive-thru, right?Â  Unfortunately, premium foods come at a premium cost to you in almost all cases.

Why can’t the affordable options have the maximum health benefits? Answer: Special Interest Groups. That’s right, those three little words are the reason you pay more to eat healthy. The Organic Consumers Association shares this John Robbins article about the irony of healthy options vs. a healthy household budget:

Why Are Twinkies Cheaper Than Carrots?

Why is Coca-Cola often more affordable than clean water? Why are candy bars and cigarettes often more readily available than fresh fruits and vegetables?

If you want to eat healthfully, you have to fight an uphill battle. Why are government subsidies pushing in the wrong direction?

Who would it hurt if we enacted policies that actually encouraged the foods that are healthiest for people and for our world? Who opposes the efforts to make it easier, rather than harder, for people to make healthy food choices?

As I describe in my new book No Happy Cows, agrichemical companies, factory farms and junk food manufacturers are quite happy with things the way they are. Thanks to their lobbying clout, government policies consistently favor the financial interests of these special interests over public health, even though the result is trillions of dollars in additional health care expenses.

Here’s an example: In just the last two years, 24 states have considered legislation that would place a tax on soft drinks. These “soda taxes” would discourage consumption of drinks high in sugar, thus reducing obesity and health care costs. And they would also raise money that could be used to subsidize healthier foods. But in every single state, the legislation has been defeated. PepsiCo Inc., the Coca-Cola Company, and the American Beverage Association have spent hundreds of millions of dollars to determine the outcome.

“In the political arena, one side is winning the war on child obesity,” a new Reuters report on the food lobby begins. “The side with the fattest wallets.”

The Center for Science in the Public Interest, perhaps the best-financed lobbying force for healthier food, spent about $70,000 lobbying last year — roughly what those opposing stricter guidelines on sugary sodas in the U.S. spent every 13 hours.

Spending $1 Trillion on the Wrong Things

Next week, the U.S. Senate will begin floor debate on the 2012 Farm Bill, which lays the groundwork for nearly $1 trillion in U.S. government spending over the next decade. Most of that spending goes to the Supplemental Nutrition Assistance Program (SNAP — still sometimes referred to as food stamps), and to subsidies and incentives for farmers.

Efforts to restrict SNAP spending to healthier foods have been fought bitterly, and successfully, by the junk food lobbies.

Meanwhile, the current Senate proposal would give tens of billions of dollars in subsidies to Big Agribusiness, but would give next to nothing to programs benefiting the environment, organic food, nutrition, or small farmers. The food blog Civil Eats calls the proposal an “all-you-can-eat-buffet for the subsidy lobby.”

In a national poll last year, 78 percent said making nutritious and healthy foods more affordable and accessible should be a top priority in the farm bill. But that’s not what’s on the table in this year’s “agri-business as usual” farm bill.

For example, funding for research in organic farming would be cut to almost nothing, while corn growers, who have received $73.8 billion in subsidies in the last 15 years, would get even more now. Subsidized GMO corn is used to produce cheap high-fructose corn syrup, a substance that even Vice President Joe Biden says is more likely to kill an American than terrorism.

This heavily subsidized genetically modified corn is also fed to livestock in factory farms and feedlots — at unfairly reduced prices.

These subsidies aren’t just costing U.S. taxpayers and enriching big agribusiness. They are also having a devastating impact on the health of tens of millions of people.

With all that we now know about nutrition, what kind of sense do these government policies make?

But 63 percent of the government’s agricultural subsidies for domestic food products in recent history have supported meat and dairy production — the very foods highest in saturated fat and cholesterol. Less than 1 percent of these subsidies have gone to fruits and vegetables.

The good news is that people are waking up, and you can join in the movement! Increasing numbers of people across partisan lines are calling for government policy to stop supporting the loudest lobbyists, and to start supporting the health of the population. And with the Farm Bill coming up for vote soon, this is a great time to get involved.