You are here: Home › Our Blog › The Many Faces of Depression: The Types & Symptoms
By Theresa Groskopp, CN on October 13, 2014 in Health News 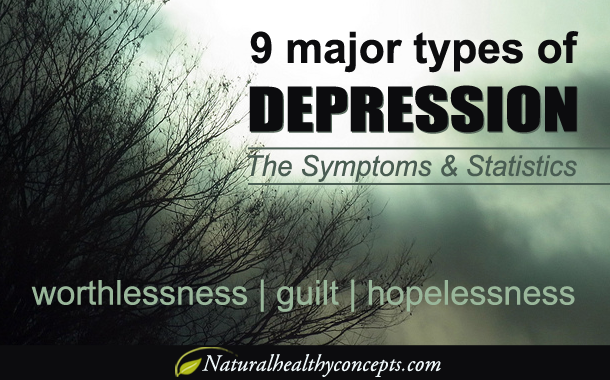 According to MediLexicon, depression is “A mental disorder characterized by sustained depression of mood, anhedonia, sleep and appetite disturbances, and feelings of worthlessness, guilt, and hopelessness.”

It’s hard to get through one day without seeing or hearing the word “depression.” Many people use it incorrectly or as a joke, but for many more people, it’s a deeply painful (and very real) emotional battle. For some, its only lasted a couple of weeks. For others, it’s been an endless battle for many years.

No two people suffer the same depression. That is, no two people experience the same symptoms, feelings, or emotions during their depression. It affects everyone in profoundly different ways.

What many people don’t realize though, is that depression may sound like an all-encompassing term, but the truth is, there isn’t just one type of depression. There are many and they all differ from each other in numerous ways, and while we may disagree on some things, one thing is for certain–depression is a very real and debilitating illness. The statistics don’t lie.

According to Healthline, diagnoses of depression are growing. As a result, so is the percentage of people hesitant to get the care they need.

Depression is so much more than just a sad mood. While one person may suffer from symptoms that are similar to those of another person, the types of depression these people suffer from can be very different.

Major depressionÂ is perhaps the biggest and most prevalent type of depression. It affects as many as 6.9% of adults in the United States, according to the National Institute of Mental Health. Symptoms generally include feelings of extreme sadness, hopelessness, and worthlessness, as well as irritability, a lack of energy, concentration troubles, changes in eating and sleeping patterns, and thoughts of death or suicide.

Major depression is typically diagnosed if these symptoms have lasted longer than two weeks. The good news is that 80%-90% of those diagnosed will respond well to treatments that may include antidepressant medication and therapy.

DysthymiaÂ is a lesser form of major depression, but is still very real and affects approximately 2% of adults across the country. Dysthymia causes a low, sad mood, which generally lasts for more than a year. The symptoms of it include sadness, concentration problems, changes in eating and sleeping habits, and fatigue.

Those who suffer from this type generally have a higher risk for developing major depression, but this risk can be reduced with regular therapy and, if needed, medications.

Pospartum depressionÂ may affect as many as 85% of women after childbirth. 16% of women who feel a profound sadness after childbirth have symptoms that are serious enough to warrant a diagnoses of this type of depression. The general symptoms of postpartum depression include extreme sadness, feelings of loneliness, hopelessness, and a disconnect from the child, as well as fatigue, suicidal ideations, and fears of hurting the baby.

Many women may assume these feelings will go away on their own. Postpartum depression is a serious form of depression that should be taken care off right away. Immediate therapy sessions can help, as can medications, if they’re needed.

Seasonal affective disorderÂ is another form of depression that many people seem to ignore. It affects as many as 4%-6% of people in the U.S., and include symptoms of anxiety, weight gain, daytime fatigue, and increased irritability.

Seasonal affective disorder is typically a bigger issue in cold climates and during winter months. According to Everyday Health, it’s more common if you live farther north. A lack of vitamin D may be a cause, as there’s less sun exposure when it’s cold out. Light and regular therapy are ideal for overcoming SAD.

Symptoms outside of those in major depression can include overeating, oversleeping, a heavy feeling in the extremities, and relationship troubles. Regular therapy is generally the best treatment form.

Psychotic depressionÂ is thought to be the most severe form of depression. As many as 20% of people who suffer from depression experience episodes so sever that they may see or hear things that aren’t really there–a break with reality.

Psychotic depression may occur in about 5% of those who suffer from major depression, and may include symptoms of hallucinations, muteness, catatonic states, and an overwhelming desire to stay in bed. Medication is generally needed to help address this form of depression.

Bipolar disorderÂ is characterized by low periods of depression followed by high periods known as mania. This type affects approximately 2%-3% of Americans, and also has the highest risk for suicide. Bipolar disorder typically has four subtypes, all of which are normally addressed with a blend of therapy and mood stabilizers.

Premenstrual Dysphoric Disorder (PMDD)Â affects around 5% of women during the second half of their menstrual cycles. PMDD is more sever than regular PMS, and include symptoms like depression, anxiety, and mood swings, in addition to the regular symptoms of PMS, such as bloating and headaches. Typical treatment involves a mix of nutritional changes and regular therapy.

Situational depressionÂ is the result of life-changing events, such as the loss of a job or loved one. Symptoms include sadness, worry, and nervousness. It’s three times as common as major depression is, but the good news is that treatment involves no medication. Situational depression typically goes away over time, but if it does not, you may be suffering from another type.

The Bottom Line About Depression

Depression is a very real and very serious illness. Getting the proper care and medication is important for recovery. If you’re not a fan of traditional anti-depressants, there are natural products that may be able to helps you get your depression under control.

Have you suffered from any of these types of depression? How are you seeking help? We’d love to hear your stories. Please leave a comment below!

5 Responses to The Many Faces of Depression: The Types & Symptoms