You are here: Home › Our Blog › The EpiPen Ripoff
By Theresa Groskopp, CN on July 25, 2013 in Health Challenges, Nutrition Politics 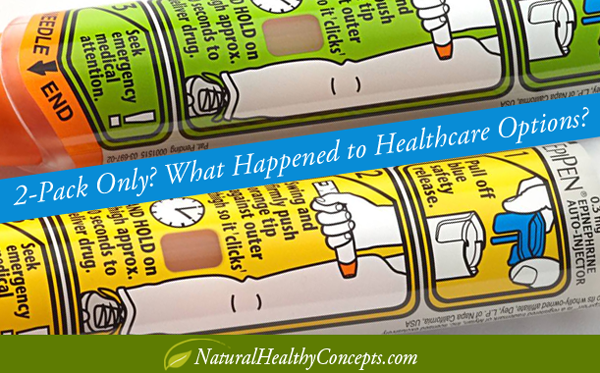 In my post onÂ Detoxing for Allergy Relief, I shared my allergy history and issue with allergic anaphylaxsis. Since I was diagnosed in my 20’s, I’ve carried around an EpiPen.

My pen had expired awhile ago and recently I went to get my prescription filled for a new one. I was shocked and dumbfounded that this is now only available in a 2-pack!

Previously I could buy a single EpiPen. I don’t recall the exact cost but I think the co-pay was around $25 and I don’t know how much insurance paid.

One of our readers shared that there may be coupons available that may help with your cost. Â Auvi-q, the new talking epinephrine injector, & epi pen both have coupons on their web sites for free epinephrine. Go to:Â http://www.epipen.comÂ &Â Â http://www.auvi-q.com/Â toÂ see what coupons are currently available.

Even at $25, I hated spending money for something I hoped to never use. But, I figured it was a necessary evil in case I would have an allergic reaction. And I have used it on occasion – probably four or five times in my life and I am grateful that I could stow one in my purse and have it available when I need it.

Assuming the average EpiPen has a lifespan of one to one and a half years, I am guesstimating that means I have bought approximately 15 to 18 pens in my life. Having used four or five, that means at least 10 had expired before they could be used – so they were just disposed of.

Well now I mustÂ purchase two at a time and most times (I hope), I end up tossing out these EpiPens without needing to use them.

Then, imagine my surprise when the pharmacy tech told me that my cost for the two pens was $250; insurance had only paid about $100. I asked if I could just buy one.

No, not an option.

I looked at the expiration date of one year and two months and asked if they had any with a longer shelf life. I rarely needed to use them and they would most likely just go to waste.

No, that was all they had.

Clearly, he has had this conversation with plenty of other consumers. So he asks me if I still want it. My comment to the pharmacy tech was, “What a racket, no I don’t really want it but I’d like to have it if I need it!”

I wonder how many of his customers have said no and skip the prescription!Â The cost of one is a lot for many people, and now they are forced to buy two!

Now, I do understand why they might want people to have two EpiPens on hand. The convenience would most likely mean they will have it available when needed. Keep one at home and one at work, etc.

But then, IÂ found this press release from Mylan (makers of EpiPen)… and President Heather Bresch explains,

“Many people may not be aware that recent food allergy guidelines state that patients at risk for or who have experienced anaphylaxis should have immediate access to two doses of epinephrine. The decision to exclusively offer the EpiPen 2-Pak, which contains two single EpiPen Auto-Injectors, aligns with these guidelines, as well as with the 2011 World Allergy Organization . . . ”

OK – so it may not be all about convenience, but may be life-saving for the 20% that just might need two doses of epinephrine due to an anaphylactic reaction. So the other 80% who will only need to take one dose, must buy two just in case.

If you’ve ever had a reaction, you know this isn’t anything to fool around with. My doctor had always recommended going to the hospital even after having injected myself in case a second dose was required. I also learned to always carry Benadryl with me, which I never thought would save me, but a doctor had told me it could provide some relief from the itching and slow the reaction down.

My opinion is that taking away the single-dose option will cost more lives since many people may not be able to afford the 2-pack.

By all means keep the 2-Pack as an option at a discounted price for those consumers that have the severest of reactions and like the convenience, but please don’t decide what is best for me. My wallet thinks it would be best to have the single EpiPen option available too. More consumers, especially the 80% that only require one dose, will be able to afford this option.

What to do if you can’t afford the EpiPen?

Other than the obvious of avoiding the allergens, there isn’t a whole lot you can do if you suffer from anaphylaxsis and can’t afford the EpiPen. You can hope and pray you don’t have an attack. My suggestion would be to reach out to the politicians in your area to express your concern. I would also buy some Benadryl to have on hand which may help if it is a less severe reaction. Please be aware though thatÂ Benadryl may not help you at all, and it is not a substitute for the EpiPen.

The thinking is that the Vitamin D status may be a contributing factor since it is well known that the northern states population typically have a greater Vitamin D deficiency. So another consideration might be to supplement with Vitamin D.Â Ultimately, the ideal situation would be that everyone who needs an EpiPen could afford one.

Not sure that ObamaCare is going to make that happen… What are your thoughts?

To Juice Fast or Not to Juice Fast?
An Allergy Elimination Diet Plan, Health Benefits & Recipes

137 Responses to The EpiPen Ripoff