You are here: Home › Our Blog › Symptoms of Zinc Deficiency {Infographic}
By Theresa Groskopp, CN on March 15, 2013 in Nutrition Supplements 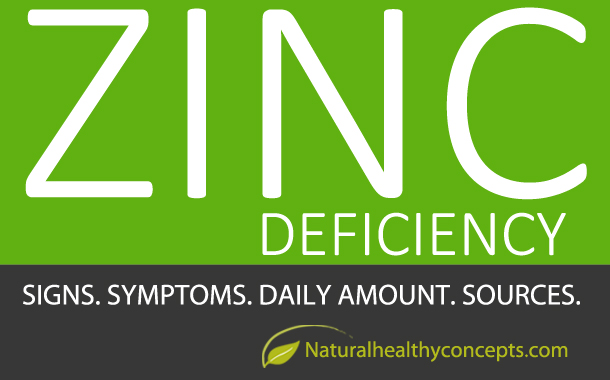 When most of us think of vitamin and mineral deficiencies, rarely do we think of zinc, yet this mineral plays a very important role in our health. According to a study at the University of Orgeon, experts believe as many as two billion people around the world have diets deficient in zinc. While many under-developed and developing countries are at greater risk (because of lack of a balanced diet), experts suggest that over 12 percent of the U.S. population is deficient in zinc, and as many as 40 percent of the elderly. For most of us, zinc deficiency develops with age because we don’t absorb it as well (and/or also don’t consume enough). Â Zinc absorption is also inhibited in meals containing phytates and fiber in foods like cereals, corn, rice and whole grains.Â Zinc deficiency is becoming a growing concern, especially when it has been connected with certain health implications such as infectious disease, immune function, DNA damage and cancer.

Importance of Zinc in our Diets

It’s well known that one of the most important roles of zinc is supporting our immune system, especially when fighting colds and infection, but zinc is also essential because it supports most of the the organ systems in our bodies, inculding the gastrointestinal, central nervous, reproductive, skeletal, and integumentary systems. According to Dr. Mercola, zinc also plays a cruical role in things such as:

Zinc is essential for the formation and migration of neurons in the brain, and deficiency can interfere with neurotransmitters and pathways that affect behavior and development in young children, as well as adults. Dr. Mercola also points out that

Adding zinc to the diets of teenagers has even been shown to cause improvements in memory and attention span.

Along with promoting the development of children and teenagers, zinc also helps protect against oxidative stress, inflammation, and DNA damage. DNA damage and zinc deficiency is definitely a growing concern, because new studies are now linking DNA damage with various types of cancer, infection and autoimmune diseases. According to a study from Oregon State University,

A considerable body of evidence suggests that zinc deficiency may increase the risk of some chronic diseases, including cancer. This link may be attributed to the role of zinc in antioxidant defense and DNA damage repair.

One reason why zinc deficiency is under the radar is because most people are not tested for proper zinc levels, and when they are tested, they are not very accurate. Perhaps the best way to determine if you (or your children) have a zinc deficiency, is to look for these common signs and symptoms:

While zinc is available in a wide variety of foods, only about 15%-40% of the zinc actually gets absorbed in our bodies–and the rate of absorption becomes less as we age;Â  which is why older adults are at greater risk.Â  The dietary intake of zinc definitely depends on the composition of your diet and also on age and disease status. The recommended daily allowance for adults usually ranges between 8-12 mg, but again that depends on many factors.

Some of the best food sources of zinc include liver, grass fed beef, oysters, crimini mushrooms, spinach, wheat, oats, eggs, milk, nuts, green peas, and pumpkin seeds. In non-meat sources, like many plants and vegetables, the absorption of zinc is much less, which makes the need for supplementation even greater in vegetarians.

If you know that you are zinc deficienct and feel your dietary intake is not getting you enough zinc, it may be a good idea to look at zinc supplementation. Â Some of our top selling supplements include:

Its always a good idea to talk to your healthcare practitioner on supplementation and recommended amounts because too much zinc can affect the balance of other nutrients and minerals in your body, which in turn can cause other side effects on the body.