You are here: Home › Our Blog › The Difference Between Folate, Folinic Acid and Folic Acid
By Theresa Groskopp, CN on May 13, 2015 in Health News, Nutrition Supplements 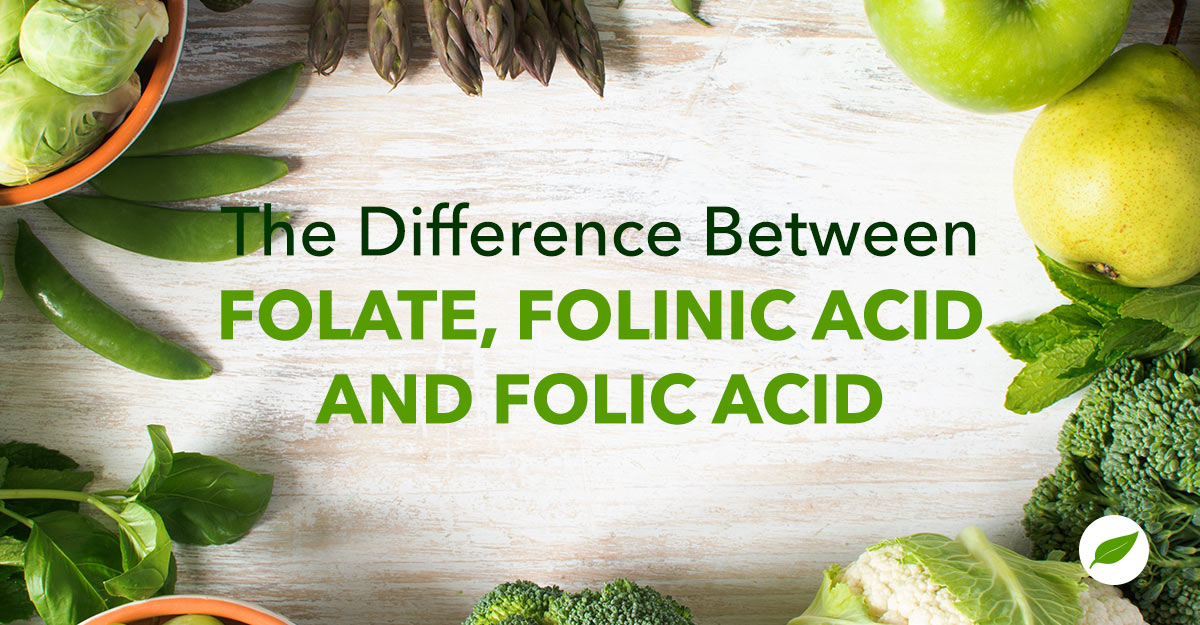 You may have heard about the folic acid controversy and wondered what it has to do with you. At the center of this debate is the U.S. governmentâ€™s folic acid food fortification program, which became mandatory in 1996 â€œdue to overwhelming evidence for the protective effect of folic acid supplementation before conception and during early pregnancy on the development of neural tube defects in newborns.â€ (Source)

While this effort has resulted in fewer birth defects, the long-term effects for nonpregnant adults have come into question, especially with the significant increases in cancer since the program began as well as the lack of long-term studies by the government. â€œThe more we learn about folic acid, the more itâ€™s clear that giving it to everyone has very real risks,â€ says folic acid researcher David Smith PhD, as quoted in a Prevention magazine article titled Is Your Breakfast Giving You Cancer?

The people at most risk are those who consume too much fortified food, and the estimated one-third of the human population who has a gene mutation named MTHFR, which causes them to be unable to turn folic acid into folate due to the fact that they do not produce enough dihydrofolate reductase. This unmetabolized folic acid ends up in the blood stream, which may lead to health issues such as cognitive decline and susceptibility to certain cancers.

As Smith goes on to say, â€œUnlike folate, folic acid isnâ€™t found in nature, so we donâ€™t know the effect of the excess.â€

Due to feedback on this revelation and concern about a related proposed rule from the government, it was just announced that the National Toxicology Program and the Office of Dietary Supplements will be conducting research into the potential adverse health effects of ingesting high levels of folic acid.

This revelation has also resulted in the availability of more natural folate and folinic acid supplements. But, whatâ€™s the difference between all of these? Even though the terms are often used interchangeably, folate, folic acid and folinic acid are not the same.

Folate, or vitamin B9, is found naturally in food as tetrahydrofolate derivatives. Folate is metabolized to THF in the small intestine, which allows for easier accessibility to the body. It is essential to your health to get adequate folate intake from natural food sources. The following chart from The World’s Healthiest Foods lists some of the best sources.

The U.S. Recommended Daily Allowance for folate is 400mcg for those 14 years and older. Pregnant women should consult with their obstetrician about their folate dosage, but the general recommendation is 600mcg.

Folate is required by the body during rapid cell division and growth. It is also essential for human development, normal nerve functioning, proper brain functioning and reducing blood levels of the amino acid homocysteine (a cardiovascular risk factor). Folate also supports the growth of the placenta and fetus, and helps to prevent certain types of birth defects. The tetrahydrofolate that is derived from folate breaks down harmful homocysteine into beneficial methionine, which promotes cardiovascular and brain health. (Source)

Folic acid is an oxidized synthetic compound that was introduced in 1943. It is used in food fortification and in dietary supplements. It is known to be more stable and bioavailable than natural folates. Folic acid goes through initial reduction and methylation in the liver, but needs dihydrofolate reductase in order to be converted to THF form. (Source) Increasing evidence is suggesting that this process may be slow or impaired in humans. (Source) Folic acid functions much like folate.

Folic acid is found in fortified products like breads, breakfast cereals, pasta, white rice and other products that contain enriched flour, and supplements.

If you canâ€™t get enough folate through your diet, I suggest you look for natural folate supplements, which are derived from whole-food, nonsynthetic sources. Itâ€™s a good idea to look for products that list 5-methyltetrahydrofolate, or 5-MTHF, on the label or that are sourced by Metafolin (L-methylfolate), which requires no conversion because it is bioidentical to folateâ€™s bio-active form. Folate 400mcg as Metafolin by Solgar is a popular option at Natural Healthy Concepts.

What do you think about the folic acid controversy? What do you eat to get enough folate each day? Do you take a folate, folic acid or folinic acid supplement? Iâ€™d love to hear your thoughts on this topic!

To get more informative posts delivered right to your inbox, subscribe to our blog below.

21 Responses to The Difference Between Folate, Folinic Acid and Folic Acid