You are here: Home › Our Blog › Snack Down Like an NFL Pro — Well Sort Of! {Infographic}
By Theresa Groskopp, CN on January 29, 2013 in Health News 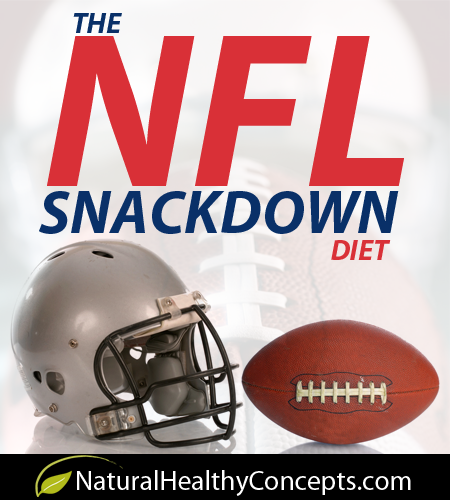 Super Bowl 47 is almost upon us and many of us, it seems, will spend the day eating like an NFL player in training camp — in quantity anyway, if not quite quality.

Super Bowl Sunday is ahead of Christmas and second only to Thanksgiving for the sheer quantity of food that will pass our lips over 24 hours.

There may have been a time when the excess of chips and dips, chicken wings, and pizza that will feature that day resembled a pro player’s pregame snack, but that day is no more.

Recalling his early career, former Tennessee Titan defensive tackle Torrie Griffin said that for breakfast, players would tuck into supersized restaurant portions of waffles, eggs, bacon, grits, and toast. They would follow this with a dinner of two burgers, mac and cheese, and fries.

Griffin recalls: “I didn’t really think about how much of the bad stuff or fat and calories were in the food when we ate out.”

Not thinking of the bad stuff probably sums up Super Bowl Sunday for many of us.

Today, however, it’s very different for the players who will run out on to the New Orleans Saints Mercedes-Benz Stadium.

Having an unhealthy body weight will only slow a pro down and make him more sluggish and susceptible to injury, says Barry Rubin, head strength and conditioning coach for the Philadelphia Eagles.

So what does this mean for players’ diets?

Well that depends on when and who you’re asking.

Off-season Build Up, or Tear Down

Off season, for example, is all about building players up — or these days, slimming them down.

Team nutritionists present each player with a personalized program, evaluating his daily needs for calories, carbohydrates, protein, fat grams, and vitamins, to get his weight up or down, as required.

Diets also vary depending on body size and position. For example, with a focus on strength and power, an offensive lineman will follow a high protein diet, with such foods as lean meat and eggs.

A running back, on the other hand, is more interested in speed and agility, so he’ll focus on wolfing down some tasty carbohydrates.

Then, there’s training camp — and the conditioning hell that is two-a-day training sessions over four hours in the blazing summer heat. Players’ bodies need foods that supply rapid energy and help them retain muscle mass.

They will burn 2,000-3,000 calories alone during those mammoth double-session practices.

Regular Season — Down to a Science

During the regular season, a player’s diet should be around 55 percent carbohydrates, 15 percent protein, and 30 percent fat, according to Leslie Bonci, an expert in sports nutrition and a consultant for the Pittsburgh Steelers.

Ideal meal patterns include three meals per day with a pre-exercise and post-exercise snack in between each meal.

So what are the foods that can meet these varying needs during the year and help boost performance:

They have it down to a science, honestly, they do.

For example, football is a stop-and-go sport that requires quick bursts of energy. That is why the majority of a football player’s energy comes from carbohydrates.

So while we clog our arteries and stain our jerseys , worn with our own natural padding, those who are about to entertain us will start the festivities with pre-game meals well scrutinized and adapted by the teams nutritionists to provide exactly what is needed to have us yelling at the screen.

They will probably breakfast on eggs, pancakes, waffles, bread, cereal, and toast, with some lean protein and plenty of fruits and juices.

Then about two hours before a game, they will hydrate and consume incredible amounts of carbohydrates.

This pre-game meal will probably be a blend of around 80 percent carbohydrates, 10 percent protein, and 10 percent fat.

High fat foods are definitely off the menu — they take more time to digest and could leave a player feeling sluggish and lacking energy.

No, they will probably feast on grilled or broiled chicken, turkey subs, pasta with red sauce, fish or steak, low-fat milk, baked or boiled potatoes, and lots of other vegetables and fruit.

A meal to prepare them for what will be for many the Greatest Show on Earth — and not a chicken wing or chip and dip in sight.

Diet for the masses?

So what do you think? Are NFL pros on to something when it comes to a healthy diet or are there some flaws in their thinking?

For example, sports drinks are not without their controversy. They are much more corrosive to your teeth than water is and may contain as much as two-thirds of the sugar of sodas and more sodium.

Fresh coconut water, with its high electrolyte level, may be a far better option for most of us to rehydrate ourselves. We have a range of other natural replenishing options, as well.

And, there is the ongoing controversy about whether pro players have a lower life expectancy than the rest of us, largely due to heart-related issues.

Let us know what you think by commenting below.

Eating to Lose Weight and Build Muscle: How the NFL Does It — WebMD

How Many Calories Should a Football Player Consume? — by Livestrong

Super Bowl Sunday ranks second only to Thanksgiving for eating in U.S. — timesnews.net

Embed This Image On Your Site (copy code below):

One Response to Snack Down Like an NFL Pro — Well Sort Of! {Infographic}