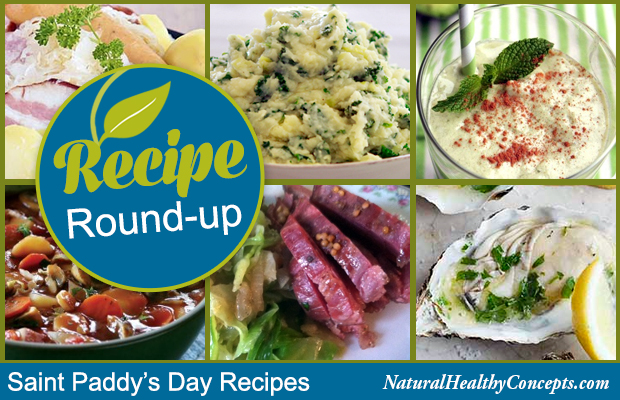 Saint Patrick’s Day is right around the corner. It’s that time of year when everyone is allowed to be a wee bit Irish – whether it’s in their blood or not.

St. Paddy’s is a ton of fun – although with all the drinking and eating – it’s not always the healthiest of holidays.

However, there are actually quite a few ways to celebrate with authentic Irish dishes (and some Americanized ones) that can be both nourishing and delicious.

Try your luck with these five St. Patrick’s Day recipes… 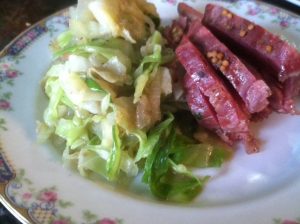 The cabbage and the carrots – yeah sure. We all know those veggies give you some nutrients. But then there’s the issue of the corned beef.Â  It’s super salty, pretty fatty, and perhaps worst of all – most of it is packed with nitrites and other preservatives.

But I love corned beef and cabbage. That’s why it was great to find a healthier version of this dish from the Wellness Mama. She makes it at home in the a slow-cooker and she uses a recipe for homemade corned beef, which she got from the cooking blog, Jun-blog.

Interestingly, the author of that blog is of Filipino descent. He’s not Irish – but he obviously knows his stuff. Jun Belen explains that corning is actually a method of curing meat by soaking it in brine. He shows you how to do it at home – without the unnecessary chemical preservatives.

Another option is skipping the corned beef all-together. Corned beef is actually more of an Irish-American tradition. An authentic Irish version of this meal would use bacon instead. Irish-American immigrants started eating corned beef rather than bacon, because it was less expensive. 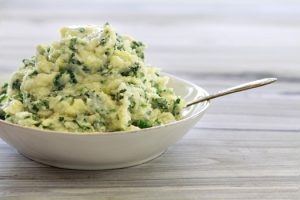 So today, many Irish meals include potatoes – including this one – a yummy comfort food with a healthy twist.

Colcannon is pretty simple. It’s basically mashed potatoes with greens mixed in. In most cases it’s made with things like the superfood kale or cabbage. But other ingredients may include green onions, leeks or chives.

The potato is a high-carbohydrate food that has a very high Glycemic Index number. But these recipes help to add some extra nutrition.

Find out how to make a fairly traditional version of colcannon from Katie at Clarks Condensed. She used kale, scallions and mushrooms along with coconut milk instead of cow’s milk.

Karina at The Gluten-Free Goddess made a more non-traditional version of this potato dish. She mixes up the flavor by adding green chile peppers, and mixes up the colors by adding purple cabbage and carrots.

The colcannon you see pictured above comes from GoodLifeEats and is made with kale, leeks, bay leaves and parsnips.

Colcannon is a great idea because the greens make it look nice and festive, while making boring mashed potatoes more fun and flavorful. It’s an Irish tradition to hide a coin or some other prize in the potatoes…just don’t chip a tooth! 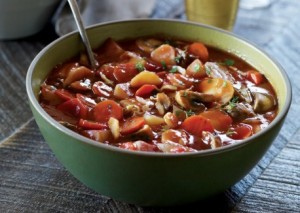 Another popular dish around St. Patrick’s day is Irish Stew. Usually it is made with lamb or beef, but you can also make a vegetarian-friendly version.

We found one great option on Vegetarian Times. Their Hearty Irish Lager Stew is made with a ton of vegetables as well as mushrooms sauteed in garlic (for that more meaty umami flavor). The recipe gets even more flavor by adding a pale Irish lager like Harp, but you can use other beer. Adding some Guinness would likely make it even richer.

Tapioca is described as the secret ingredient in this vegetarian Irish dish. It helps to thicken-up the stew. Vegetarian Times actually has a list of many Irish recipes you can try.

This is a great magazine for vegetarian foodies who love trying out new recipes. You can subscribe to Vegetarian Times on Magazines.com where you’ll save quite a lot off of newsstand prices. 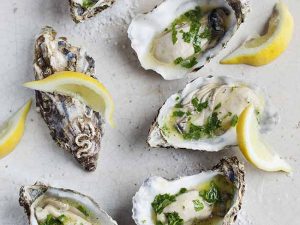 While corned beef and cabbage often steals the spotlight on St. Paddy’s Day – we can’t forget about another delicious Irish duo – Guinness and oysters. Those scrumptious shellfish pair very well with a pint of Irish stout.

Plus, oysters are very nutritious -packed with protein and minerals as well as B-vitamins and essential fatty acids like Omega-3s. They’re also considered to be an aphrodisiac food. So if you really want to get lucky this Saint Patrick’s Day…try one of these recipes.

Irish Central has directions for making hot, buttered oysters. They suggest placing the curvy shells on top of a dollop of mashed potatoes (maybe some colcannon) to keep the oysters from tipping over. This recipe actually comes straight from the renowned restaurant at the Ballymaloe House in Ireland.

While the previous dish features oven-roasted oysters, you can also eat them raw. A recipe from SeriousEats suggests scooping some frozen Guinness – aka Irish Stout Granita – over the top of fresh oysters before slurping them down. 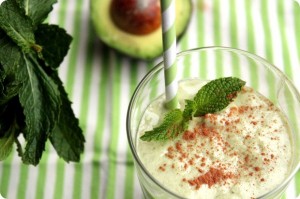 Yes, we know. Those minty Shamrock shakes from McDonald’s are definitely not a tradition in Ireland. But they’re green, and they’re only available this time of year.

You won’t be surprised to learn how unhealthy Shamrock shakes can be.Â  That’s why many people have tried to replicate these treats in a more desirable way.

One that we found uses bananas, fresh mint leaves, almond milk and avocados. You read that right – avocado in a sweet, mint smoothie. Anne at Fannetastic Food says they make the smoothie extra creamy and the flavor is so mild you don’t really taste the avocado at all.

The blogger at Hungry-Girl.com packs some extra protein in her healthy version of a Shamrock shake. She says she uses vanilla flavored protein powder from Terra’s Whey, which you can order from Natural Healthy Concepts with free shipping. Plus, Hungry-Girl also adds some spinach to give it a natural green color.

How Do You Celebrate Saint Patrick’s Day?

Now it’s your turn to chime in! Tell us what traditions you observe over St. Paddy’s Day.Â  What’s your favorite thing about the holiday? Do you have your own healthy version of a Shamrock Shake?

Need help getting in the right mood for St. Paddy’s Day? Watch the music video below featuring the classic Irish tune “Finnegan’s Wake” — with puppets.