You are here: Home › Our Blog › 7 Rhubarb Recipe Ideas: Creative Ways to Use Rhubarb
By Theresa Groskopp, CN on May 29, 2015 in Healthy Recipes 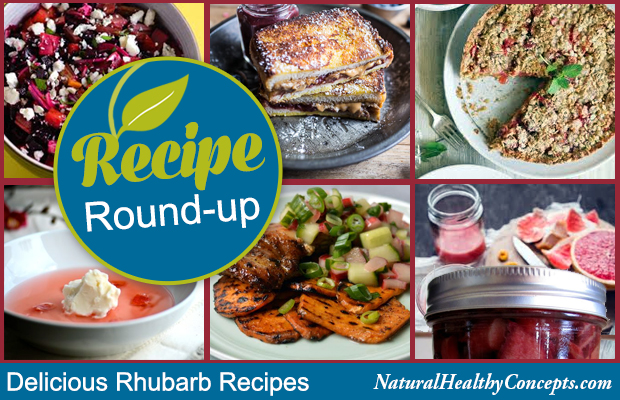 The most familiar fixture in my grandfather’s backyard garden was always the giant, leafy stalks of rhubarb.

He’s a great-grandpa in his late 80s now, and not quite as active. The garden in his yard has sadly turned back into grass, but the last thing to go was that perennial rhubarb. It was his gardening trademark.

Every summer, there would be rhubarb sauce around for dessert, used in a pie or just as a little side dish. I can also remember eating raw rhubarb stalks dipped in sugar.

But what else can you do with rhubarb?

We usually head straight to dessert ideas when it comes to rhubarb recipes: rhubarb pies, rhubarb bread, rhubarb crisp. However, this plant has a lot of potential in other types of food and also offers some significant health benefits. 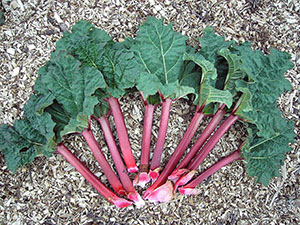 Technically, those stalks that look like big red celery sticks are in fact a vegetable. But for tax purposes, rhubarb is often put in the fruit category here in the United States. In the 1940s, a New York court ruled the plant could classify as a fruit since it’s most-often used in fruity ways.

The result? Reduced tariffs on imported rhubarb as tariffs are higher for veggies than fruit.

Rhubarb has a ton of beneficial nutrients. One of the most notable is Vitamin K, which plays a role in supporting brain and nervous system health as well as maintaining healthy bones. There’s also a good amount of Vitamin C, along with the minerals manganese and calcium. Plus, rhubarb provides plenty of dietary fiber, which can help with digestion and could even aid in weight loss.

Free radical-fighting antioxidants like lycopene and anthocyanins can be found in rhubarb. That’s how rhubarb gets its red color. Interestingly, you’ll only get the lycopene from cooked rhubarb. The raw stuff gives you none.

If you grow rhubarb at home, be aware that the green leaves can actually be poisonous. Don’t eat them. They contain oxalic acid, which can be toxic if ingested. It’s also important to know that the oxalic acid may transfer to the stalk if rhubarb is subject to extreme cold. Always remove the leaves before freezing or refrigerating. 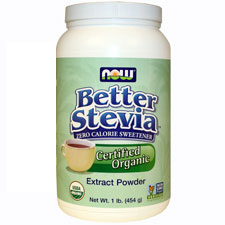 Humans have only been consuming rhubarb for about 400 years. People in England started eating the stuff in the 17th century after sugar became more affordable and accessible.

Of course, therein lies one of the problems with many rhubarb recipes. They’re chock-full of sugar. It’s kind of necessary, given how tart (and sometimes bitter) the plant can be. Yet some chefs say people use way too much sugar when making rhubarb recipes, and it masks the true flavor.

Still – you’ll need to use something to sweeten up that rhubarb. There are alternatives to refined sugar. You can try using honey, or you can find natural sweeteners online at Natural Healthy Concepts including stevia and xylitol. Check out this article on SFGate.com on using alternative sweeteners in your rhubarb recipes. 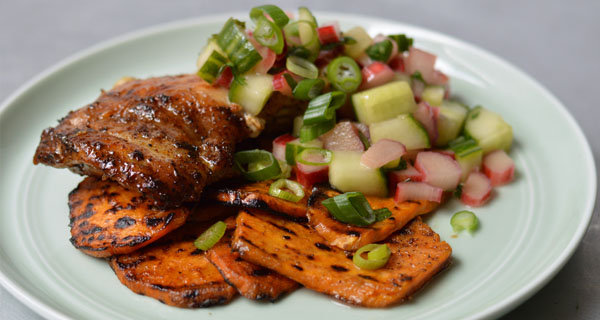 The best way to stop thinking about rhubarb as a dessert-only ingredient is too look for ways to incorporate it into your main meal.

We found a great idea from the Natural Gourmet Institute that adds a fresh cucumber and rhubarb salsa to spicy chicken thighs and grilled sweet potatoes.

For the salsa, you simply combine cubed cucumbers and rhubarb (raw) with some scallions, cilantro, oil and lime juice. Let it sit for about an hour and season with salt and pepper to taste.

It’s a tangy and refreshing side dish that really tops off this scrumptious-sounding summer meal! The recipe is designed to be affordable, too. Each serving should only cost you about $5. 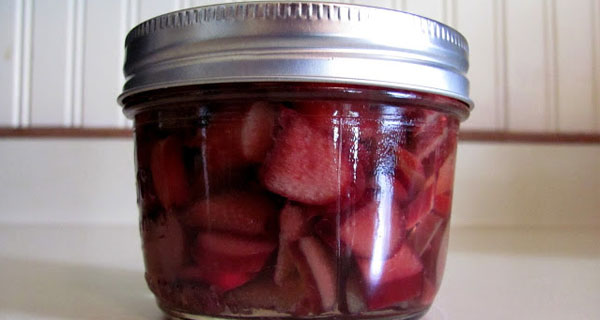 Want to enjoy that rhubarb flavor all year long? Try pickling it!

We found one method on SweetDomesticity.com. That’s where Maria explains how she pickles her rhubarb in white wine vinegar and rice vinegar with thinly sliced, fresh ginger. She cuts up the stalks into bite-sized pieces. Maria finds the pickled bites make a great topping on certain salads.

Many people also pickle larger sticks of rhubarb, and there are many other flavors you can add, such as clove, anise, chili peppers and even Indian spices like turmeric. Find a list of different rhubarb pickling ideas at PunkDomestics.com. 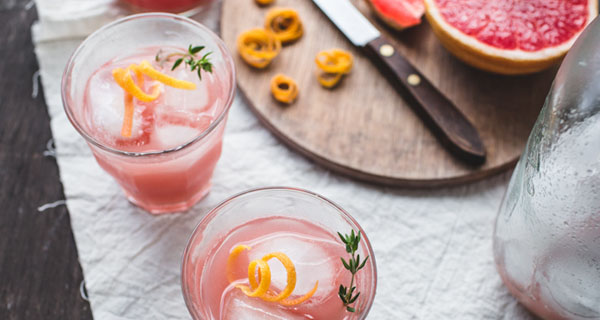 Why not try drinking your rhubarb? It’s the perfect flavor for a cold summer cocktail.

One of the many possibilities we found for mixing up a rhubarb cocktail comes from the food blog Top With Cinnamon. It’s a Rhubarb, Grapefruit and Thyme drink.

This and many other rhubarb cocktail recipes will require you to make some rhubarb syrup. To do so, you’ll need to mix some basic ingredients together and cook it all down, allowing the rhubarb to break apart. After bringing it to a boil and letting it simmer for awhile, you strain the mixture and discard the pulp.

To make this cocktail, Izy Hossack combines the syrup with grapefruit juice and vodka. Then she garnishes the drink with a swirl of grapefruit peel and a sprig of thyme for an attractive finishing touch. Check out 16 more rhubarb cocktail recipes from around the web curated at BuzzFeed. You can make everything from strawberry-rhubarb margaritas to rhubarb mojitos! 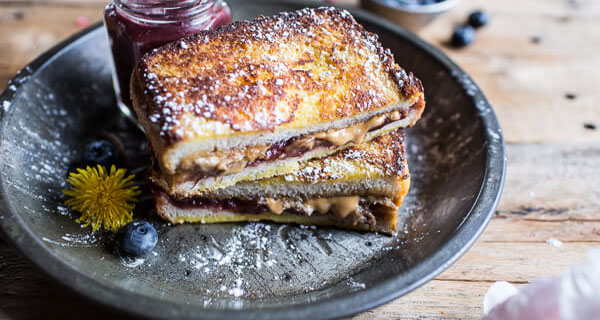 How about rhubarb for breakfast? This mouth-watering recipe will break up your mundane morning routine.

Half Baked Harvest shows us how to make Peanut Butter and Rhubarb Jelly Hot French Toast Sandwiches. Quite the name for a dish!

Food blogger, Tieghan, describes this recipe as a twist on the plain-old peanut butter and jelly sandwich. But looking at the picture makes you think this would be an amazing choice at the fanciest brunch spot in town.

This recipe calls for making some rhubarb jelly. She uses honey to sweeten up the rhubarb, and suggests adding more or less depending on how sweet or tart you like it. Tieghan also adds a mix of blueberries and raspberries as well as vanilla bean, the latter of which is optional. After making the jelly, it’s as easy as making french toast and using two slices to make a sammie! 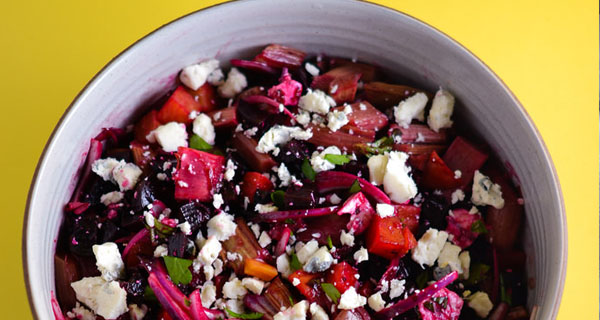 This colorful summer salad recipe will be almost as pleasing to your eyes as it is to your taste-buds.

Vicky at Things I Made Today admits she usually thinks of dessert when rhubarb comes to mind. But she’s breaking out of that pattern with this one. She found the recipe in British chef Yotam Ottolenghi’s cookbook, Plenty More. It was on the cover, and she figured it was featured there for a reason, so she had to give it a shot. Vicky was glad she did and called the recipe “perfection.”

To make Ottolenghi’s Beet & Rhubarb Salad, you’ll need to roast your beets in the oven. The rhubarb will get tossed with sugar (or another sweetener) and then baked for about 12 minutes so it is slightly soft, but not mushy. You’ll mix the beets with vinegar, molasses, maple syrup, olive oil and a selection of spices and seasoning as well as onion. Then you add the rhubarb and crumbled Gorgonzola cheese just before serving.

Vicky says she and her husband loved the combination of sweet beets, tart rhubarb and creamy Gorgonzola. 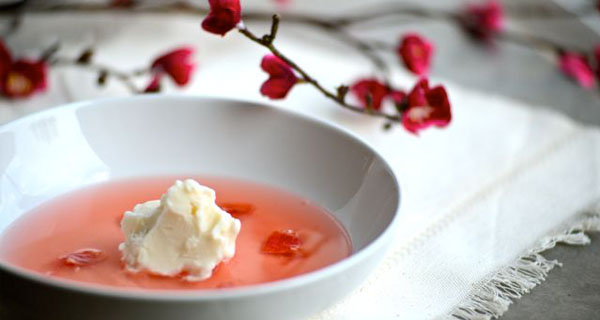 How would you like to capture “the essence of spring” in a bowl of soup? That’s what Scandanavian food blogger, Daytona of the website Outside Oslo, says you can do just that with this sweet dish.

Daytona actually lives in Seattle, but she has a Norwegian heritage. Folks in Norway would call this “rabarbrasuppe,” and it’s been adapted from a recipe in the book The Nordic Diet.

To make it, you’ll need to boil down the rhubarb with sugar and then strain it, much like with the rhubarb syrup, but with more rhubarb and less sugar. You’ll also bake some rhubarb to add to the light broth later on. It is served chilled and topped with a dollop of ice cream or whipped cream. Daytona has a homemade ice cream recipe for you to try making, too.

As you can see, the soup ends up as an attractive pink color. This would make a great dish for a summertime baby shower or bridal shower. 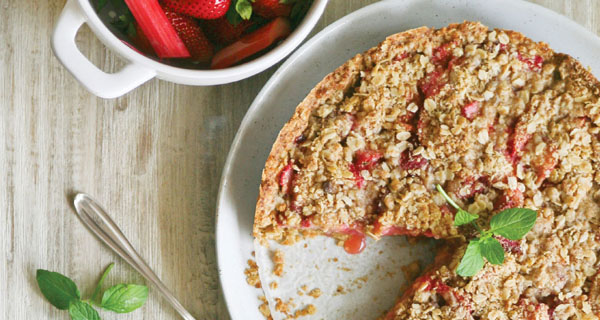 We had to include one rhubarb pie recipe in this article. So here’s one that’s ideal for people with common dietary restrictions. This pie is both gluten-free and vegan friendly, but you’d never think so by looking at the picture!

In fact, Pure Ella’s Strawberry & Rhubarb Crumble Pie has just six ingredients. You’ll need to track down a gluten-free all-purpose flour you like to use as well as vegan margarine. Pure Ella suggests using organic cane sugar or coconut sugar as your sweetener. She also says you can use less sugar in the directions for the crumble if you plan to serve it for a brunch and want it more on the tart side.

This pie is delicious while still warm and fresh out of the oven. But you can also enjoy the leftovers straight from the fridge!

There are many other creative ways to use rhubarb in your cooking. You can get additional ideas when you visit Rhubarb-Central.com and learn even more at The Rhubarb Compendium.

Do you have ideas for using rhubarb? We’d love to hear about them. Leave us a comment below and tell us more…