You are here: Home › Our Blog › Pueraria Mirifica and its Effect on Vaginal Health
By Theresa Groskopp, CN on April 10, 2017 in Health Tips 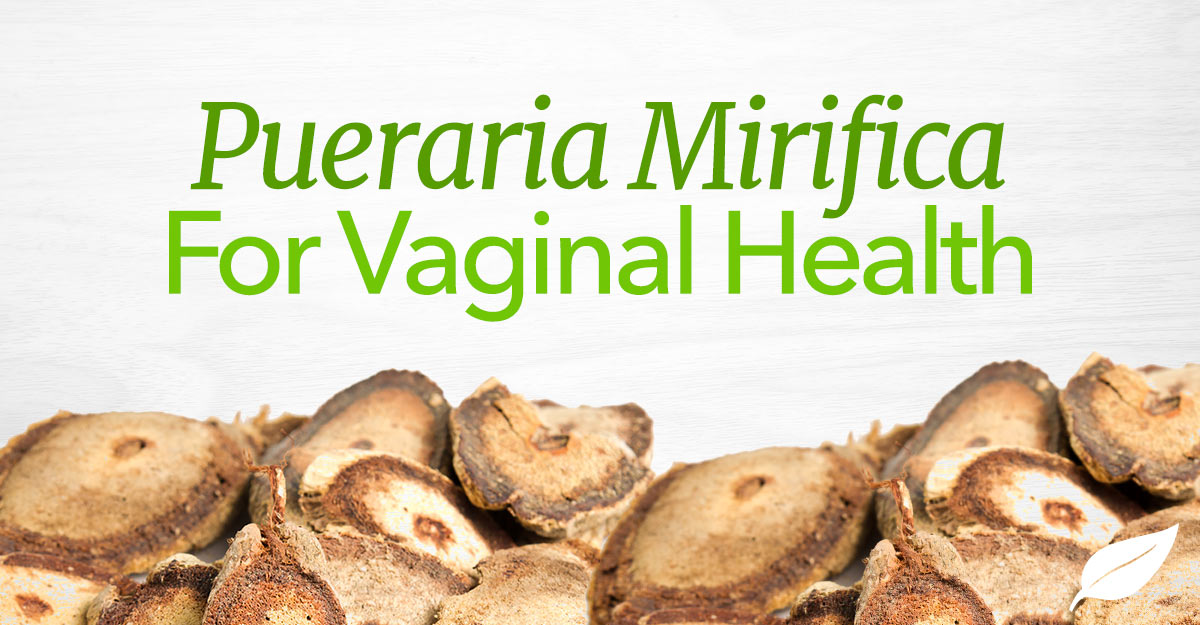 No matter your age, supporting your health should be a lifelong goal. However, as we age, our bodies may require more or different nutrients in order to maintain optimal health. Women in particular experience a number of health challenges during the aging process, and while 40 may be the new 30, it can also mean that these women begin to experience symptoms of menopause. Symptoms you may feel uncomfortable talking about!

However, current research suggests that a plant calledÂ Pueraria mirifica may offer potential benefits for vaginal health, vaginal dryness and for healthy aging. So what is this buzzy new plant, and could it make a difference for you?

What is Pueraria Mirifica?

Pueraria mirifica is also known as Kwao Krua or Thai Kudzu, and is a member of the Leguminoseae (legume) family. Native to northeastern Thailand and Myanmar, it is a perennial climbing vine with bright green, heart-shaped leaves that produces wrinkly, beet-shaped tubers. These tubers have been used in local Thai communities for medicinal purposes for over 100Â years, but it wasnâ€™t until the 1930s that Pueraria mirifica became more widely known for its potential health benefits.

Interestingly, Kwao Krua was traditionally used to support healthy aging, and was believed to support hair growth, memory, circulation, skin health, and healthy energy levels in aging individuals. In the 1930s, researchers began studying the plant for its effects on womenâ€™s health. The plant was officially identified as Pueraria mirifica in 1952. Since then, it has been used to support vaginal health and to promote normal estrogenic activity.

Women and the Aging Process

During the aging process, women experience a number of changes in their bodies. Menopause isn’t a disease, it’s just a normal part of life that comes whether we are ready or not! Menopause occurs when the ovaries no longer release an egg every month and menstruation stops. This happensÂ because the body produces less estrogen, which is the hormone that controls ovulation.

Menopause can be accompanied by a number of uncomfortable symptoms, including hot flashes, fatigue, night sweats, vaginal dryness, moodiness, and more. The severity of these symptoms may affect not only daily activity, but also overall quality of life and sexual relationships. This processÂ can last for years or for a short time frame. Hopefully, if you’re a woman, you’re one that draws the lucky straw of menopause lasting very briefly.

While some women consider options like hormone replacement therapy, the potential negative health consequences have caused others to look at Pueraria mirifica to support their health during this time.

So what makes this plant so unique for womenâ€™s health?

It is thought that one of the reasons Pueraria mirifica may support vaginal health is due to the presence of phytoestrogens. Phytoestrogens are naturally occurring plant compounds that are structurally similar to the estrogen compounds found in humans and other mammals. Common phytoestrogens include lignans, which are components of plant cell walls (typically found in fiber-filled foods like berries and seeds), and isoflavones, which are found in foods like soybeans and other legumes, including Pueraria mirifica.

Pueraria mirifica is also a source of unique phytoestrogen groups called miroestrol and deoxymiroestrol, as well as the isoflavonoids puerin, daidzin and daidzein. Miroestrol and deoxymiroestrol are considered SERMs, or Selective Estrogen Receptor Modulators, meaning they selectively bind to estrogen receptors and act as antagonists or agonists, depending on the type of tissue they bind to. According to a 2012 study on Pueraria mirifica,

Miroestrol competes with estrogen and blocks the excessive stimulation of estrogen receptors often seen with breast or endometrial cancer. On the other hand, these phytoestrogens act as estrogen agonists to support bone density, promote cardiovascular health, and to alleviate menopausal symptoms.

As a result,Â Pueraria mirifica is often used to support healthy estrogenic activity as well as for its other potential health benefits, including vaginal health support.

Pueraria mirifica may have an effect on the above tissues. (image via the Journal of Restorative Medicine)

There have been several studies that examined the link between Pueraria mirifica, menopause, and vaginal health, with mainly positive results. In fact, according to a 2014 study, topical application of Pueraria mirifica may offer support for vaginal dryness and atrophy. Vaginal atrophy usually evolves after lack of sexual activity due to dryness and lack of estrogenic activity. After all, who would possibly want to have painful sexual intercourse? Researchers concluded that “The implication is that PM could be a safer alternative to treat vaginal atrophy in postmenopausal women.”

In another study, 71 women between the ages of 45 and 60 were given either placebos or a dose of Pueraria mirifica (the study was randomized and double blind). The women who took the Pueraria mirifica experienced less dryness and other negative symptoms than those who took the placebo, leading researchers to conclude â€œPueraria mirifica was proven to exhibit estrogenicity on vaginal tissue, to alleviate vaginal dryness symptoms and dyspareunia, to improve signs of vaginal atrophy, and to restore the atrophic vaginal epithelium in healthy postmenopausal women.â€

Itâ€™s clear that although research into Pueraria mirifica is ongoing, it may offer a number of potential benefits for your health. If youâ€™d like to experience Pueraria mirifica for yourself, we offer it here at Natural Healthy Concepts!

Tried pueraria mirifica? We’d love to hear your story in the comments!

Could Maca Powder Support Your Energy Levels?
How Healthy Are You? Check Your Snot.

One Response to Pueraria Mirifica and its Effect on Vaginal Health