You are here: Home › Our Blog › The Many Potential Celery Seed Benefits
By Theresa Groskopp, CN on September 21, 2017 in Diet, Nutrition Supplements 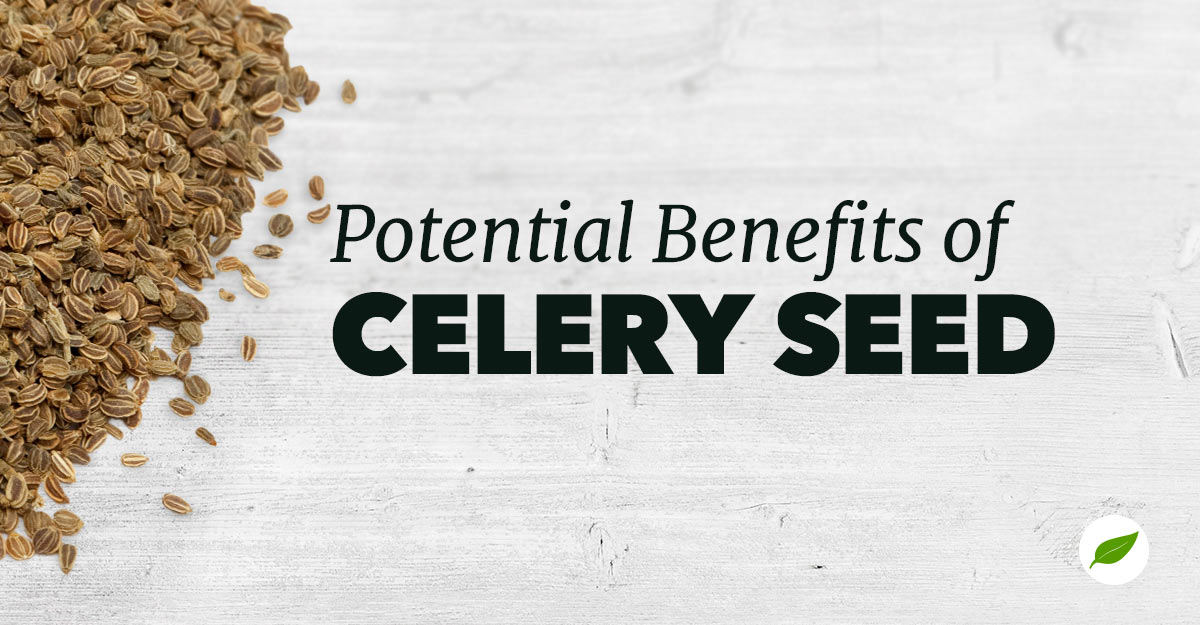 Do you use celery seed in your everyday cooking? If so, you might be aware of some celery seed benefits: it adds depth of flavor to spice mixes, and can be the difference between a good and a great vegetable broth.

But did you know that celery seed benefits extend far beyond the kitchen?

Dozens of studies have examined potential celery seed benefits, and while there are too many studies and journals to analyze, one takeaway is this: no matter what your health goal may be, there may be a way that celery seed can support it.

A student published by the National Institutes of Health (NIH) looked at the ways that different celery seed extracts affected blood pressure (BP) in rats. The student evaluated the way that celery seed interacted with the ratsâ€™ blood pressure and heart rate, and stated that â€œit can be concluded that celery seed extracts have antihypertensive properties, which appears to be attributable to the actions of its active hydrophobic constitutes such as NBP.â€

Another study published by NIH, titled â€œRole of Natural Herbs in the Treatment of Hypertension,â€ observed the way a variety of herbs, including garlic, tea, and celery, affected hypertension. The authors of the study stated that, â€œAccording to Chinese theory, Celery is effective for HTN because it acts upon the liver; one type of HTN is associated with the liver. In Mainland China, celery was useful in reducing HTN in 14 of 16 patients â€¦ it has also been reported to reduce systolic and diastolic BP.â€

While fresh celery juice, mixed with equal amounts honey, was used for the study, the authors also concluded that celery seeds â€œcan be used as a safe and effective treatment for high BP.â€

Celery seed has been used as a diuretic in the Eastern world for thousands of years. Some studies have shown that celery seed may help maintain blood pressure in animals, and may support a healthy liver.

Celery seed also contains polyphenols, which are â€œabundant micronutrientsâ€ and are believed to support a variety of nutritional goals.

A study in the Oxidative Medicine and Cellular Longevity examined antioxidants in plant-derived products. When looking at six different plants, including onion, parsley roots and leaves, celery roots and leaves, and dill leaves, the authors found that â€œcelery leaves exhibited the highest total phenolic content.â€

While phenols themselves are â€œa toxic and corrosive compound,â€ many types of phenols can provide potential health benefits. In fact, â€œsome phenolic compounds are believed to be cancer chemopreventatives, compounds that may reduce your risk of developing cancer.â€ Still, other phenols â€œmay have antioxidant effects, meaning they react with and capture dangerously reactive compounds called free radicals before the radicals can react with other biomolecules and cause serious damage.â€

How to Get the Benefits

If you want to explore how celery seed may benefit you, there are a few ways to start incorporating it into your life. The first is easy: buy a jar of celery seed! Because of it’s disctinct flavor, celery seed use is recommended for cooking shellfish, flavoring chicken, or with potatoes, cheese, carrots, or eggs. Itâ€™s also great as part of a pickling mix.

Celery seed can also be made into an herbal tea by mixing boiled water and celery seed. If the taste of celery seed tea isnâ€™t too your liking, you can also incorporate it into a vegetable broth.

How do you use celery seed? Share your thoughts in the comments!