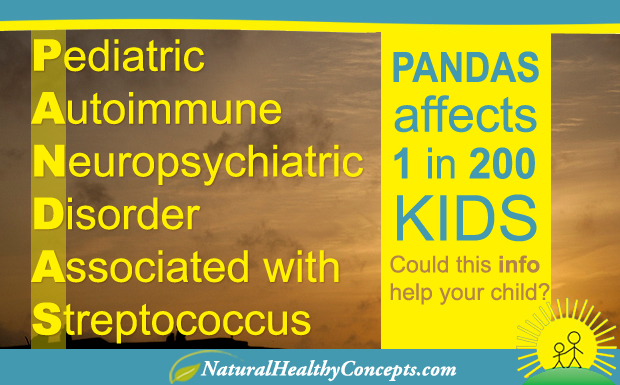 Every day people are misdiagnosed with psychiatric disorders and often placed on risky medications. Today, more and more of them are children.

Natural Healthy Concepts is passionate about your families health. We care deeply about getting to the root problem when someone’s health (and behavior) is compromised. Our goal is to help families avoid the agonizing and costly effects of a misdiagnosis and the medicating of children whenever possible.

Do you know what life is like for them?

We recently reached out to two amazing mothers who have children with PANDAS/Pans.Â  Here’s what they’d like you to know…

Imagine if your child went to bed one night, but the next morning she could not get dressed because none of her clothes felt right, and she refused to eat because she was too afraid she might choke.

Or, if your honors student suddenly couldnâ€™t finish a test, was erasing holes in all of his papers, got suspended for fighting, and was afraid to leave the house in case there was a tornado, despite blue skies.

Or suddenly, your 12-year-old was afraid to let you leave her sight because you might die, and she raged anytime you tried to leave for work.

Now imagine that these children have one thing in common: a recent strep infection. They are all diagnosed with PANDAS.

PANDAS, Pediatric Autoimmune Neuropsychiatric Disorder Associated with Streptococcus, is a life-changing disease that can affect children quickly and drastically. PANDAS symptoms will typically follow an acute or persistent, unresolved group A beta-hemolytic strep (GABHS) infection like strep throat, impetigo, or other strep-related illness.

PANDAS was first discovered in 1998 by Dr. Susan Swedo during a Pediatric Obsessive Compulsive Disorder study when it was found some childrenâ€™s OCD behaviors began shortly after a strep infection. In any autoimmune disease, it is the consequence of a misguided immune response against self-antigens by autoantibodies that results in the damage of specific organs. In the case of PANDAS, the childâ€™s brain is being attacked.

PANDAS has been called Rheumatic Fever of the Brain. In Rheumatic Fever, autoantibodies attack heart valves due to a process called molecular mimicry. In PANDAS, the brain is under fire, specifically the Basal Ganglia. This area of the brain controls emotional responses, certain motor movements, procedural learning, cognition, and more. Under attack from the auto-antibodies, the brain becomes inflamed causing a wide range of seemingly unrelated symptoms that may appear to be a mental illness or neurological issues.

PANS, Pediatric Acute-onset Neuropsychiatric Syndrome, is another autoimmune condition that has been identified as effecting children. In PANS, the condition may be caused by mycoplasma pneumoniae (walking pneumonia), Lyme, Epstein Barr Virus (Mononucleosis), or other bacterial/viral infections. There may also be environmental or metabolic triggers in PANS, and the condition cannot be otherwise explained by a medical or neurological condition. The childâ€™s Basal Ganglia is also affected in PANS.

PANDAS/PANS is not well known and is often referred to as a â€œrareâ€ condition.

Parents of affected children and some PANDAS/PANS Specialists believe it to only be rarely diagnosed or misdiagnosed. The average age onset of PANDAS/PANS is between 4 and 7, but it may strike youth at any age, and some adults have also reported symptoms.

It is estimated to affect at least 1 in every 200 children.

PANDAS and PANS cause many of the same symptoms, the differentiating factor is the trigger for initial onset. The diagnostic criteria for PANS differs slightly from PANDAS, but treatments are similar for both of the conditions. There is no evidence that PANDAS/PANS causes any brain damage but impairment during symptomatic exacerbations can be intense.

What Are the Symptoms of PANDAS/PANS?

In PANDAS, symptoms can come about immediately following a strep infection, or weeks to months later. Other infections or causes would bring a PANS diagnosis. Symptoms wax and wane and resolve or lessen with treatment, only to return following another infection. In some cases, exposure to an illness can bring symptoms even if the child does not actually get sick but because the immune system was triggered.

Research suggests that each additional infection may cause PANDAS/PANS exacerbations to worsen. Parents of these children can often relate the exact day they noticed their child turn into an unrecognizable version of their former selves. Impairment is significant and greatly alters the way a child functions in their daily lives.

How is PANDAS/PANS Diagnosed?

At this time, there is no specific testing for PANDAS/PANS. Doctors would give a clinical diagnosis by looking at all symptoms, medical evidence, and ruling out other conditions. Diagnosis may begin by testing for strep with a swab, culture, or blood tests (ASO and anti-dNaseB titers) to find possible missed strep infections.

It is also recommended to test for other infections and treat any current illnesses. The Cunningham Panel from Moleculera Labs can be used during the diagnosis process to look for certain markers in the blood that may indicate PANDAS/PANS.

Due to PANDAS/PANS symptoms, misdiagnoses are common. In many cases, it can take months or years for a correct PANDAS/PANS diagnosis. Families may need to travel to a PANDAS/PANS Specialist for treatment because many doctors have not heard of the condition.

How is PANDAS/PANS Treated? Medical Interventions

Treatments for PANDAS/PANS are varied, and at this time there is no standard protocol. The mainstays of treatment are antibiotics, steroids, anti-inflammatories, and Intravenous Immunoglobulin/ IVIG therapy. Some patients also benefit from using supplements for immune system support. Homeopathy has also been used as a PANDAS/PANS treatment.

PANDAS/PANS children will typically receive antibiotics to treat any current or lingering bacterial infections. The antibiotics may be used short-term or long-term as a protection against illnesses after infections are cleared. Augmentin may be used in PANDAS to treat strep, but some other antibiotics are also thought to have beneficial anti-inflammatory effects. Anti-virals may also be used in some cases, depending on the cause of the childâ€™s symptoms. Prophylactic antibiotic use is often recommended to protect PANDAS/PANS children from infections.

Steroids may be used to control an overactive immune response but are not typically used long-term in PANDAS/PANS. Some doctors may prescribe a short steroid burst during the diagnostic phase to see if there is a reduction in PANDAS/PANS symptoms. The effects are usually short-lived but are sometimes enough to give the child some relief. Ibuprofen or other anti-inflammatories may also help to control symptoms short-term.

Intravenous Immunoglobulin /IVIG therapy is a blood product containing pooled IgG antibodies from over a thousand donors. It is administered intravenously in an outpatient setting over a few days or can be done at home by a qualified health professional. IVIG is thought to help a PANDAS/PANS childâ€™s immune system by giving them antibodies they may be missing and possibly reduces inflammation. Plasmapheresis, which filters the childâ€™s own blood, is another treatment that may be used in PANDAS/PANS.

PANDAS/PANS symptoms such as OCD, tics, ADHD, rages, etc… are often seen as mental illnesses or neurological conditions. Doctors may be quick to prescribe SSRIâ€™s or other psychotropic drugs, but PANDAS/PANS will not typically respond to typically prescribed drugs.

In PANDAS/PANS the root of the problem is medical, an infection, that needs appropriate treatment.

Supporting the immune system is also helpful. B Vitamins, Vitamin C, Vitamin D3 and other supplements can help ensure that a child avoids illnesses and keep the immune response strong.

Check with your doctor for specific immune support recommendations.

It is important to be aware of PANDAS and PANS as possible pediatric medical conditions. Be sure to check with your doctor if your child experiences drastic behavior changes after an illness.

Treating PANDAS/PANS can save a child from a lifetime of psychiatric and/or medical issues!

Sarah Jane Alleman is a mother to her awesome 10-year-old son Jesse who was diagnosed with PANDAS four years ago. She writes PANDAS Sucks, a blog about what PANDAS is really like. Sarah lives in Lexington, KY and is also the Director of Kentucky PANDAS/PANS Support. She can be reached at: [email protected]
Please allow up to 3 days for responses to any emails. Thank you.

Kristen Buffone is a stay-at-home mom who lives in Greensburg, Pennsylvania with her husband and three youngest children, one of whom has had PANDAS for 3 years. She spends a lot of her free time keeping up with the latest research, educating and raising awareness. She can be reached at [email protected]
Please allow up to 3 days for responses to any emails. Thank you.