You are here: Home › Our Blog › The Global Origins of Essential Oils
By Theresa Groskopp, CN on December 12, 2016 in Health and Wellness Gifts, Health News 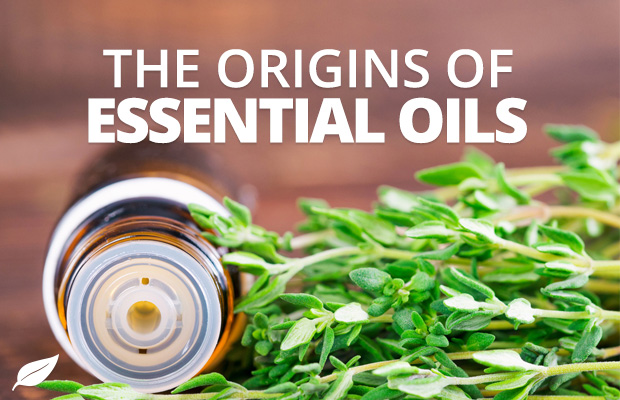 Essential oils have a history that dates back thousands of years.

Since ancient times, thousands have turned to aromatherapy to support their health. Aromatherapy refers to the practice of using essential oils to support your health, whether that is through diffusion, massages, bath oils, or direct application.

From applying cooling peppermint oil to support head pain, to diffusing lavender oil to support a healthy sleep, these oils have a fascinating and complex history that began in Ancient Egypt and has spanned decades and continents.

Essential Oil Around the World

Often when we think of essential oils, we think of their use in Ancient Egypt. Egyptian culture was characterized by their interest in cosmetics and incense; in fact, Cleopatraâ€™s beauty is often attributed to her use of essential oils. Essential oils (or aromatic oils) were used in religious ceremonies, as perfume, and for medicinal purposes, likely as early as 2000 BCE.

Wealthy Egyptians used a variety of oils as perfume and beauty aids, and priests used these same oils to create herbal preparations, ointments, and salves, and also used them for spells and rituals. One of the most famous uses of essential oils in Ancient Egyptian culture is in mummification. According to Herodotus, a Greek historian, oils like cinnamon, cedar, juniper, frankincense, and myrrh were used to preserve the body for the afterlife.

Oils were also used medicinally. For example, the Kahun Papyrus, one of the oldest known medical texts that dates back to 1800 BCE, contains information about using essential oils to treat a variety of conditions. In one section, the papyrus suggests using incense to treat both toothaches and eye issues.

Essential oils formed a key part of the Ayurvedic tradition in Ancient India, which has existed for nearly 3,000 years. Ayurveda emphasizes the connection between the mind (or spirit) and body, and focuses on achieving health through meditation and mindfulness. The oils themselves were used in rituals, spells, and as medicines, and today, these oils are used in Ayurvedic massages.

According to Vedic literatures, which are sacred Sanskrit texts that were passed down orally until they were written down starting in 1700 BCE, herbal and floral essences were used to support both physical and psychological issues. These oils include cinnamon and cardamom, as well as over 700 herbs for supporting a variety of conditions. For example, in the Sushruta Samhita, a Vedic text composed around the sixth century BCE, herbal blends are suggested for addressing negative symptoms.

Chinaâ€™s use of essential oils has been recorded as early as 2697 BCE. Herbs and plants form the basis of Traditional Chinese Medicine, and are also used in folk medicine. One of the most significant texts in Ancient China, known as Huangdi Neijing, also called The Yellow Emperorâ€™s Book of Internal Medicine, recommends using essential oils to support external and internal health. This book is still considered a source of information by essential oil practitioners.

Botanical extracts formed a key part of medicinal practices in Ancient Greece, and many of their practices were derived from Ancient Egyptian practices. They used oils that included thyme, saffron, marjoram, cumin, and peppermint. The well-known physician Hippocrates recommended, â€œa perfumed bath and a scented massage every dayâ€ as a way to promote overall health, and advocated fumigation with aromatics to combat the plague in Athens. In Rome, oils were used for bath oils, massages, and as perfume, and also the subject ofÂ several books on the applications of plants.

Persia is often credited with being the first society to use distilled essential oils, a process that may have been invented sometime between 980 and 1037 AD. This discovery was standardized by Ali-Ibn Sana, who is also called Avicenna the Arab. He was a child prodigy and physician who, at the age of twelve, wrote several books on the properties and effects of plants. The method of distilling he discovered is still used today.

Much of Western Europeâ€™s herbal knowledge was gleaned from crusaders, who acquired the methods of distillation from travels to the Middle East and Asia. In 14th century Europe, frankincense and pine were burned to ward away evil spirits during the Bubonic Plague, and several monasteries compiled volumes related to herbal lore. Using herbs and essential oils became more widely accepted in the 17th century, when herbalist and botanist Nicholas Culpeper published The Complete Herbal, which covers herbal remedies for common ailments.

However, it wasnâ€™t until the 20th century that aromatherapy became a common household word. In 1910, a French chemist named Rene-Maurice Gattefosse coined the term aromatherapie after he used a vat of lavender oil to soothe his burns. He published the book Aromatherapie in 1928, which details various essential oils and their uses. A French medical doctor, Jean Valnet, also used essential oils while treating war wounds during the Indochina War in 1948 and published his findings in The Practice of Aromatherapy in 1964.

Today, we continue to use many of the same oils, including frankincense, balsam, marjoram, myrrh, cedar, and juniper. While we don’t use these oils for mummification, we continue to use essential oils to support our health. If you’re interested in trying some of these oils yourself, we offer a fantastic selection of oils here. Here are a few of our favorites:

Earthy, spicy, and woody, frankincense oil has been used for thousands of years. Use it to soothe your skin and protect it from insects, or use it for temporary relief for minor cuts and burns.

Juniper oil has a distinctive scent similar to eucalyptus or pine and is used to promote a healthy and upifted mood. Diffuse it during the holidays for a fresh, outdoorsy feel.

Peppermint oil’s cooling properties make it ideal for a number of uses. You can inhale it to support sinus health, or apply it to your temples to support the temporary relief of minor head pain.

Channel your inner Gattefosse with the soothing scent of lavender. Its soft, floral notes support relaxation and a healthy sleep.

Which essential oils do you use? Let us know in the comments!