You are here: Home › Our Blog › The Omega-3 Strength Test: How They Can Improve Performance and Reduce Muscle Soreness – Almost Immediately!
By Theresa Groskopp, CN on November 20, 2013 in Health Tips 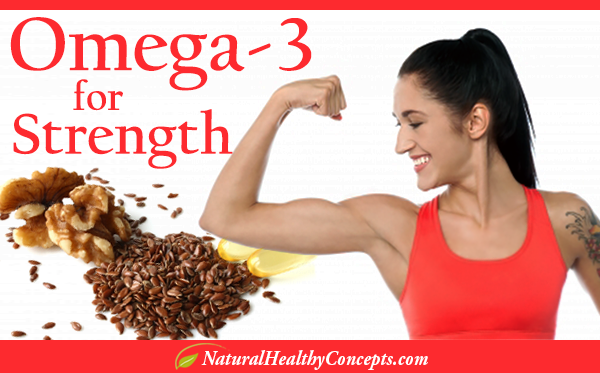 If you’re even the least bit interested in natural health, you’ve probably heard about how beneficial Omega-3 essential fatty acids can be.

That’s because they’ve been shown to have anti-inflammatory effects. And inflammation is a direct cause of many different health issues – from heart complications to cancer and all types of auto-immune diseases.

But Omega-3s could also have a noticeable impact on your everyday life – helping you avoid sore muscles and possibly even improving strength and athletic performance. A 2011 study published in the Journal of Sports Science and Medicine examined the effects of Omega-3 supplementation on people who undergo “eccentric strength exercise.”

Eccentric training is basically the lowering part of a repetitive exercise. For example, if you were doing a bicep curl with a dumbbell, it would be the portion in which you slowly uncurled your arm into a relaxed position.

That’s the same exercise participants in this study performed.

Researchers from Doisy College of Health Sciences at St. Louis University tested 11 healthy men and women to find our how their muscles responded to Omega-3s. During the first part of the study, subjects were put on an omega-3 restricted diet for 14 days, and also kept a food and exercise journal to help note any impact that may have on results.

During the second half of the study, subjects took an Omega-3 supplement of 3,000 mg per day for 7 days. They were also told to closely follow the same diet and exercise routine recorded in their diaries from the 14-day control trial.

At the end of each trial – participants were asked to perform bicep curls until they reached the point of fatigue and could no longer complete the exercise normally. They were then tested immediately following the exercise and again 48 hours afterwards.

After the trial including Omega-3 supplementation, subjects reported noticeably reduced muscle soreness and less swelling. Plus, these people were also able to complete more repetitions of the exercise

Remember – the test subjects weren’t doing these eccentric bicep curls everyday – only when they were being tested at the end of each trial. They were also told to replicate their diet and exercise routine from the control trial. So it’s unlikely that they were simply stronger from increased exercise.

Researchers were not expecting to discover that participants would be able to complete a higher volume of eccentric exercise after taking Omega-3 supplements. But they were.

One explanation the researchers stated was that “omega-3 supplementation increased muscle strength or decreased fatigue.”Â  This conclusion coincides with other studies cited in the article, which found Omega-3s can have an anabolic effect on muscles in healthy humans, and that a diet rich in omega-3s helped increase grip-strength in older adults.

There’s a very interesting test that demonstrates the impressive effects that Omega-3s can have on your muscles. You can even try it at home. In fact it shows that taking a supplement can have an impact on strength in less than a minute.

We recently gave it a try ourselves here at Natural Healthy Concepts with some of the Omega-3 products we offer.

Watch the video below to see what happens…

It might seem somewhat unbelievable that Mary was able to improve her performance on the strength test so quickly. We weren’t faking it – Scout’s Honor!

Keep in mind that she was taking an oil, which Theresa told Mary to hold under her tongue before swallowing. That allows the Omega-3s to enter the bloodstream as fast as possible.

You may have also heard Mary say “It feels better too.” The first time she performed the exercise it was difficult for her to resist Laura pushing back on her leg. Mary seemed to be experiencing pain. The second time – after taking the Omega-3s – it was not only easier to push back, she also felt less soreness.

There are a lot of good reasons to make an Omega-3 supplement part of your daily routine. Besides all the preventative benefits, it appears things like fish oil and flaxseed oil may have the potential to improve your athletic performance while helping you avoid fatigue as well as the pain of muscle soreness after an intense workout.

Do you already take an Omega-3 supplement. Tell us why you feel it’s so important to your health. Have you noticed any effect on the condition of your muscles. Leave us a comment and tell us more!

Dealing with the Stress of the Middle-Aged Sandwich
1000 Reasons You Should Quit Smoking with The Great American Smokeout!