You are here: Home › Our Blog › Omega 3 Fish Oil and the Prostate Cancer Controversy
By Theresa Groskopp, CN on July 16, 2013 in Nutrition Politics, Nutrition Supplements 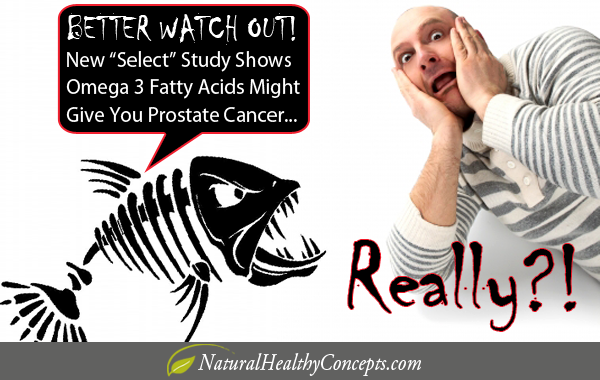 “Eating a lot of oily fish or consuming omega supplements may not be good for a man’s health.”

That’s the lead-in sentence in the article Omega 3 Fish Oils Linked to Prostate CancerÂ in Medical News Today. Rather attention-getting, isn’t it?

Medical News Today reported on theÂ research paperÂ from The Journal of the National Cancer Institute,Â Plasma Phospholipid Fatty Acids and Prostate Cancer Risk in the SELECT TrialÂ and since then, there has been quite the flow of comments about the validity of the research, whether or not big pharma funded the study, etc.

I thought it might be helpful to share some of the feedback from the nutrition industry so you can factor in a variety of key points before deciding whether you should stop consuming fish or supplementing with Omega-3.

When the paper’s senior author and member of the Fred Hutch Public Health Sciences Division, Alan Kristal, Dr.P.H, said:Â “we’ve shown once again that use of nutritional supplements may be harmful,”Â there is bound to be a response from the nutraceutical industry. Thank goodness!Â We have had several companies in the industry comment about this whole controversy.

Below a couple physicians in the industry have chimed in…

“We agree on the importance of making clinical and policy decision based on “rational, scientific medicine (and medicines) whose efficacy has been confirmed in impartial, reproducible clinical trials.

However, in this recent trial, Dr Kristal’s team was “unclear to the mechanism Omega 3 fats could cause cancer. It was also not possible to tell for certain whether the elevated blood levels were due to men taking supplements or eating fish rich in omega-3s”. More importantly they do not distinguish sources and forms of omega 3 as we discuss below. They also do not distinguish increases in inactive omega 3 precursors (ALA) and active forms (EPA and DHA).

Scientists like Drs. Kristal and Offit are quite selective in the studies they cite and their analysis appears to be incomplete in many ways. To read more on Dr. Jaffe’s take on this study and others by Dr. Kristal and Offit, click here.”

Â Doctor Murray writes – important considerations of this data include the following:

“This study is not consistent with other studies; see in-depth discussionÂ here.

The facts are that population-based studies show just the opposite effect. For example, prostate cancer incidence and death rates are among the lowest known in populations consuming the traditional Japanese or Mediterranean diets, two diets with a relatively high content of EPA+DHA.”

Should I, will you, continue taking Omega-3?

That is the question many who have read and seen various versions of the reported paper will be asking. I personally will continue taking Omega-3 supplements and so will my husband. Granted, I don’t have a risk of prostate cancer but a few family members have experienced, some fatally, a variety of cancers.

There are plenty of studies that suggest it may be beneficial to supplement with Omega-3 and/or consume fish. Â Some are cited in Doctor Murray’s article above. Here’s another about Fatty Fish Consumption & Prostate Cancer RiskÂ in the Lancet Dr. Geo mentions in his commentary about this study.

Do your due diligence and I think you will come to the same conclusion. Please share your thoughts below.

Is Gluten Intolerance the same as Celiac Disease?
Vitamix: The Ultimate Kitchen Tool For Health & Nutrition