You are here: Home › Our Blog › Nutrient Deficiencies & Gluten-Free Diets: What You Should Know
By Theresa Groskopp, CN on May 18, 2015 in Health News 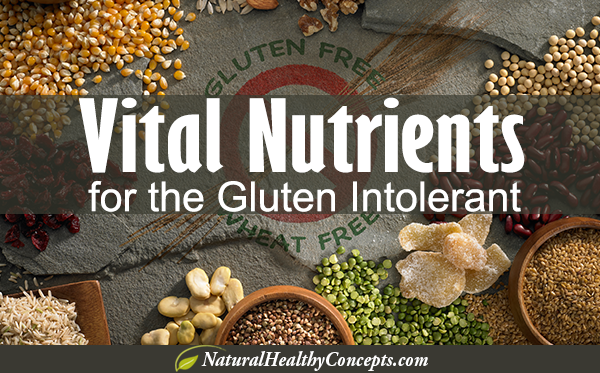 If you’ve been following a gluten-free diet for any amount of time, you know how difficult it can be. Not only do you have to watch what you eat, but you have to be aware of gluten in other things you use every day. (Shampoo, shower gel, cosmetics, and skincare products are just a few to be wary of.)

A gluten-free diet can be a life-saver (literally!) if you suffer from celiac disease or a non-celiac gluten sensitivity. However, this wonderful diet can still leave you with nutrient deficiencies.

The Nutrients Associated with Gluten

When you think of gluten, one of the first things you probably think of is flour. While it’s true that most flours are fortified with gluten (wheat flour is one of the most common ingredients found in many foods today), it’s not the only food that gluten is in. Found in other grains like barley, rye, and spelt (and all of the foods containing these grains), gluten is likely in many more places than you think.

Gluten itself is a protein, and the flours (and some of the foods) that contain it will have added nutritional benefits. Flour has been fortified with added nutrients since World War II when the U.S. and Britain wanted to enhance the health and well-being of their general populations.

Today, “most cereals, breads, and other gluten-containing items are fortified with nutrients like iron and B vitamins, among others” (Source). However, because flour seems to be one of the most fortified ingredients in many foods, not ingesting flour may lead to nutrient deficiencies.

A Breakdown of Vitamin and Nutrient Deficiencies

If you suffer from gluten intolerance or celiac disease, a gluten-free diet can improve your health in a big way. However, both of these issues are very likely to leave you with several nutrient deficiencies.

Because most of the processed gluten-free food offerings available today aren’t supplemented with extra nutrients, and because the gluten-free diet restricts the intake of foods and ingredients that are supplemented (such as wheat flour), it’s important to make sure you’re getting those missing nutrients through other foods, or through the use of daily supplements.

If you’re gluten intolerant, be sure you’re getting the following:

1. Vitamin B6:Â An important factor in your body’s fight against infections, as well as in the maintenance of normal nerve function, vitamin B6 is near the top of the list when it comes to nutrient deficiencies in those with gluten intolerance.

It’s always a good idea to get your nutrients from whole foods whenever you can, and you can start by getting B6 from chickpeas. According to About Health, “one cup will give you more than half of the vitamin B6 you need in a day” (Source). Other foods that provide a good amount of B6 include tuna, salmon, turkey, chicken, and even bananas.

2. Folate:Â This nutrient plays a vital role in helping to prevent birth defects in unborn babies, and is also important for the production of new cells throughout your body.

Many foods that contain gluten are fortified with folate, so a gluten-free diet can leave you with pretty low levels. Go for the green when supplementing with foods. Spinach, broccoli, brussels sprouts, and asparagus are all high in folate. In fact, when you eat “10 spears of asparagus, you’ll be more than halfway to your daily folate goal” (Source).

3. Vitamin D:Â This crucial nutrient is produced when your skin is directly exposed to sunlight. That’s why it’s called “the sunshine vitamin,” after all! Most people are deficient in vitamin D because of the lack of sun exposure, but those with gluten intolerance may be slightly more so. Why? Because while foods like dairy and cereal products are fortified with vitamin D, a gluten-free diet doesn’t allow for most of these products.

Vitamin D plays important roles in optimal brain function, cardiovascular health, bone and joint health, and much more. While your gluten-free diet may limit your intake of vital nutrients, it’s important to remember that there aren’t too many foods that can deliver a large amount of vitamin D. The few exceptions include swordfish and salmon, and dairy products like milk and yogurt.

4. Calcium:Â Calcium is a key component in optimal bone health and strength. However, many people with celiac disease or gluten intolerance also suffer from lactose intolerance, which can play a big factor in calcium deficiency. Not everyone is deficient in calcium, but a number of people may be and may not even know.

Upping your daily intake has never been a bad idea, either. If you’re one of the lucky ones who can still handle dairy, you can choose from milk, yogurt, cheese, and other dairy products. If dairy is off the table, foods like tofu, okra, and even almonds.

5. Iron:Â It is thought that iron deficiency is more prominent in people with celiac disease and gluten intolerance. However, if you’re not a fan of green vegetables or are gluten intolerance, you may be deficient, too! Iron carries oxygen from one cell to another, contributes to healthy muscle function, and plays a vital role in healthy brain function.

Green vegetables contain iron, as do lentils, oysters, soybeans, beef, turkey, and tuna. According to About Health, “just one cup of lentils has 37% of your recommended daily intake” (Source).

6. Vitamin B12:Â This important member of the B-vitamin family plays vital roles in the maintenance of healthy nerves and blood cells. It’s a key player in helping your body fight fatigue, so it’s no surprise that those deficient in B12 feel tired all the time.

Many breakfast cereal choices contain 100% of the daily recommended value of B12, but if you follow a gluten-free diet, those options are off the table. Instead, give foods like trout, beef, or cheese a try. One 4-ounce fillet of trout can give you 100% of the vitamin B12 you need in a day.

7. Thiamin:Â Known as vitamin B1, thiamin plays a vital role in helping your body create healthy amounts of energy. It’s also key for healthy memory, a healthy appetite, and also aids in heart health and the production of red blood cells.

Normally added to cereals and breads, thiamin deficiencies can leave you feeling pretty awful. Symptoms may include constipation, lethargy, muscle tenderness and even memory loss. However, foods like trout, green peas, and squash all offer thiamin. In fact, “one half cup of green peas will give you about 50% of what you need each day” (Source).

8. Riboflavin: Also referred to as vitamin B2, riboflavin is found in a number of dairy products, as well as other foods. Due to a possible dairy restriction, there’s a chance of deficiency in people with celiac disease and gluten intolerance, albeit it’s a small chance.

However, if you want to make sure you’re getting enough every day, you can also turn to foods like beef, spinach, eggs, Â almonds, oily fish like mackerel and herring, and fruits and vegetables, such as carrots, cabbage, apples, and a range of berries.

While it’s pretty rare to have a niacin deficiency, it’s always a good idea to stay on top of your daily levels. Foods high in niacin include portobello mushrooms, pumpkin seeds, avocado, green peas, and chicken.

Would you like to share how you get your daily nutrients? Leave us a comment below and let us know how you stay healthy on a gluten-free diet.

Want to see more posts like this one? Subscribe to our blog by entering your email below, and you’ll get our posts right in your inbox!

One Response to Nutrient Deficiencies & Gluten-Free Diets: What You Should Know