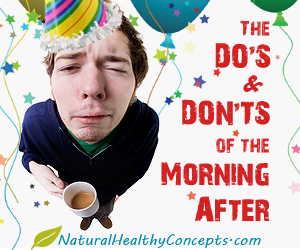 Thereâ€™s no greater day of celebration than New Yearâ€™s Eve, and perhaps no rougher morning than New Yearâ€™s Day. Iâ€™m sure weâ€™ve all been there at some pointâ€”Your head is pounding;Â  youâ€™re dizzy, nauseous, fatigued, and dehydrated. Â If you havenâ€™t thrown-up already, you probably feel like it or you want to. And now youâ€™re probably cursing the night before, swearing youâ€™ll neve
A hangover usually peaks when all of that alcohol- the New Yearâ€™s champagne, martinis, vodka, gin, wine, beer, and more champagne- that has been poured into your body is finally eliminated from itâ€”that is, when your blood alcohol content (BAC) returns to zero. The toxins are gone from your body, but the damage is not.r drink again. The dictionary defines this as the â€œresult of heaving drinking.â€ Â Yep, you guessed it–a hangover!

Alcohol is a diuretic, which causes you to lose the water in your body.Â  On top of that, your body becomes poisoned by all the alcohol toxins that your poor liver and kidneys canâ€™t handle and get rid of.Â  The scientific process between the consumption of alcohol and your hangover is quite long and complicated.

In short, the loss of fluids + alcohol toxins = HANGOVER.

Ever since the discovery of the hangover, mankind has searched for its corresponding cure. From the â€œHair of the Dogâ€ to cure the splitting headaches and nausea to water and aspirin to help with the lack of hydration, everyone probably has their own hangover cure tactic–but there really isnâ€™t one bona fide cure. So what really works? Well, weâ€™ve scoured the internet and have come up with a list ofÂ  “The Doâ€™s & Donâ€™ts of The Morning After:”

1. Do: Gulp Lots of Water- This certainly re-hydrates you and will eventually make you feel better.Â  According to Daniel K. Hall-Flavin, M.D, a consultant in addiction psychiatry at the Mayo Clinic,

before falling into bed the night before, drink 16-20 ounces of water. Order a glass of water with every beer, alternating between the two to replace the lost fluids as you go.

2. Do: Check Your Phone, Wallet/Purse and Un-tag Your Photos on Facebook– Embarrassing text messages, lost credit cards, and crazy photos from the night beforeâ€”which one happened to you? Hopefully none, but just in case, double check! While this “do” may not be a hangover cure, knowing that you didn’t lose anything or do anything embarrassing last night, might help ease your mind.

3. Do: Take B Complex Vitamins- If youâ€™re feeling shaky and fatigued the morning after, youâ€™re probably lacking b-vitamins in your body. A high dose of Vitamin B6 & B12 has been known to help balance your body and since alcohol depletes b-vitamins, itâ€™s necessary that you replenish your body.

4. Do: Try Black Currant Seed, Flax seed, or Primrose Oil– These supplements in high doses (recommended between 8-10 doses) are rich in fatty acids and help restore the essential fatty acid balance that you also lost during your night of fun. Other herbs like peppermint, willow bark, ginger, and more, have been known to help with hangovers.

5. Do: Eat Carbs and Bland Snacks- I remember when I was little, my mom would feed me toast and crackers when I had an upset stomach. While no food can stop the churning in your stomach, carbs may help bring your blood sugar levels back up. If you drank too much, your liver is too busy metabolizing the alcohol and often canâ€™t handle the extra workâ€”eating carbs and bland foods like toast and crackers will help!

6. Do: Try Foods High in Fructose– Foods high in fructose, like honey (40% fructose) and fruit juice, will help your body metabolize last nightâ€™s drinks faster. Korean scientists have suggested that fructose can speed up the body’s metabolism of alcohol by about 25 percent! Try adding some honey in your decaf tea or on your banana.

7. Do: Try Natural Detox Shakes– What do beets, a couple of celery ribs and a bunch of spinach have in common? Juice them together and you have a hangover cocktail! Beet root juice cleanses the liver and helps eliminate the alcohol toxins. Celery is a great source of calcium and magnesium that have a calming effect on the central nervous system. Spinach is highly cleansing and is essential for the body’s circulatory system, especially to the brain â€“ ah, goodbye headache!
8. Do: Rest and Sleep– If you have the luxury of sleeping it off the next day, your aching body will thank you. In reality, the only surefire treatment for a hangover is timeâ€”when you got nothing else to do, sleep.

1. Donâ€™t: Waste Your Money on Sports Drinks– While the diuretic effect of alcohol causes your body to lose electrolytesâ€”it is a very small amount; small enough that you donâ€™t need to replenish your body with sports drinks and electrolytes right away. Â Research has shown that Gatorade is no better for a hangover than water from your tap.

2.Donâ€™t: Drink Coffee or Caffeinated Drinks– Most of us love our morning coffee, but caffeine is considered a diuretic as well. If you need your caffeine buzz, drink some water with it. If you desire something non-caffeinated that is warm and relaxing-try green tea or ginger tea–which can help with the headache and nausea.

3. Donâ€™t: Drink More Alcohol– Also known as the â€œHair of the Dog,â€ drinking more alcohol really only prolongs the inevitable, and will likely make your headache worse. Some swear by that Bloody Mary and Mimosa, when in reality, youâ€™re just adding more toxins to your body. Experts believe if you use this â€œcure,â€ the risk of alcohol abuse increases and it could lead to alcohol dependency.

4. Donâ€™t: Eat Greasy Food– Maybe with the exception of bacon and eggs, which contain a lot of amino acids to help restore depleted neurotransmitters, most greasy foods donâ€™t do anything after or during a hangover (well, besides giving you a ton of calories). If you do eat, eat before or during the absorption of your alcohol frenzy. According to Menâ€™s Health Magazine,

food helps slow the absorption of alcohol, and the longer it takes the alcohol to reach your blood stream, the longer it is until you become intoxicated.

5. Donâ€™t: Take Tylenol or Acetaminophen– While Tylenol may help with a headaches when youâ€™re not hungover, studies have shown that itâ€™s unsafe to take during a hangover. Since your liver is working overtime to metabolize the alcohol, taking Tylenol or acetaminophen after a night of drinking disrupts the liver from fully breaking down the toxins in acetaminophen, risking liver damage even in low doses. Â If you feel the need to take some pill, take a non-steroidal anti-inflammatory drug like ibuprofen.

6. Donâ€™t: Waste Your Money on Hangover Pills- According to Joris C Verster, Ph.D., an assistant professor of psychopharmacology at Utrecht University in the Netherlands,

Hangover pills that have been studied are not effective, or only help against a few complaints…but not all.

Most hangover pills sold in drug stores are expensive and contain many vitamins and minerals that you probably already have in your cupboard or medicine cabinet. If you want to save money, take a multivitamin or b-vitamin supplement to help restore some of those vitamins you lost.

7. Donâ€™t: Try Sweating It Out â€“Â Exercising to sweat the booze out is a myth;Â so is sitting in a sauna. Although exercise may increase your mood by increasing the release of endorphins and make you feel better about all of those calories you drank, it really doesnâ€™t help lessen the effects of your hangover. Sweating it out can also potentially cause an abnormal blood flow in your body or abnormal heart rhythms, and if you’re already dehydrated-even slightly-excessive sweating can be extremely dangerous. Avoid excessive workouts and saunas during hangovers.

2 Responses to New Year’s Eve: The Do’s & Don’ts of the Morning After