You are here: Home › Our Blog › Natural vs. Synthetic Vitamins: Is One Better?
By Theresa Groskopp, CN on June 24, 2016 in Just in case, Nutrition Supplements 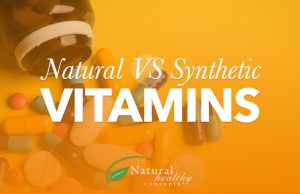 While summer should be a time to relax and unwind, it can sometimes be your busiest season. Between pool days, outdoor concerts, summer camps, weddings, and BBQs, it can be easy to forget about a balanced diet and grab whatever you can on your way out the door. However, in order for your body to stay healthy and happy in the summer months, you should make it a priority to get the vitamins you need.Â

Thereâ€™s no debate that vitamins are essential to your overall health and wellness. Not only do they help facilitate the bodyâ€™s mechanisms, they also play a critical role in preventive health. Unfortunately, your diet may not be enough to give your body the vitamins it needs. In some situations, you may need to complement your diet by taking a vitamin supplement. However, when choosing your supplements, you may notice that some vitamins are labeled natural, while others are labeled synthetic.

So whatâ€™s the difference? Is one type of supplement better than the other?

What are Synthetic Vitamins?

While the word â€œsyntheticâ€ may have negative connotations for many people, itâ€™s important to understand the real difference between natural and synthetic vitamins, since a synthetic vitamin may not actually be harmful to your overall health and wellness.

Synthetic vitamins are designed to mimic the natural effects of vitamins in your body, but rather than being derived from natural food sources, they are man-made compounds usually developed in a lab and contain identical molecular structures. By contrast, natural vitamins are sourced from plants, fruits, animals, and minerals. However, in order to be classified as a â€œnaturalâ€ vitamin, supplements only need to include 10% of actual plant-derived natural ingredients.

So, which is better?

Although generally speaking, both natural and synthetic vitamins can act as nutrient sources for your body, there are some benefits to choosing a natural supplement over a synthetic, and in some cases, vice versa.

While in most cases, the synthetic and natural versions of these supplements are identical, there are a few supplements that display fairly significant differences between the natural and synthetic forms. Below are a few of the most common vitamins whose effects are somewhat altered depending on whether the supplement is natural or synthetic.

Vitamin E is one of the vitamins whose natural supplement is superior to the synthetic version. This is primarily because the molecules that make up vitamin E (specifically alphatocopherol) are extremely difficult to synthesize in a laboratory environment. As a result, synthetic vitamin E is typically composed of several vitamin E-like compounds. Although these compounds are similar to vitamin E, they differ slightly in chemical structure and function less efficiently than their natural counterparts.

Like vitamin E, forms of vitamin K are typically better as natural supplements. In particular, the natural form of K-2 is naturally derived from soybeans and typically is better at raising vitamin K levels than other synthetic options.

Vitamin A is created when the body converts beta-carotene into retinol. Although our bodies need beta-carotene for immune support and other functions, when taken in its natural form this fat-soluble vitamin stays in the system longer, which may result in toxic levels and increased risk for certain diseases. However, the synthetic form of vitamin A combines ester (one of the animal forms of vitamin A) and palmitic acid to create retinyl palmitate. It is considered generally safe and is also a more bioavailable version of vitamin A. Consult your healthcare practitioner if you have question or concerns about supplementing with Vitamin A.

Ultimately, the decision whether to choose a natural or synthetic supplement is not an easy one, and it depends on your body’s specific needs. Which do you prefer? Let us know in the comments!

The Many Sources & Health Benefits of Copper
Liposomal. Lypo-Spheric. What do they mean?

2 Responses to Natural vs. Synthetic Vitamins: Is One Better?