You are here: Home › Our Blog › 6 Potential Health Benefits of Myrrh Oil
By Theresa Groskopp, CN on February 5, 2018 in Health Tips, Nutrition Supplements 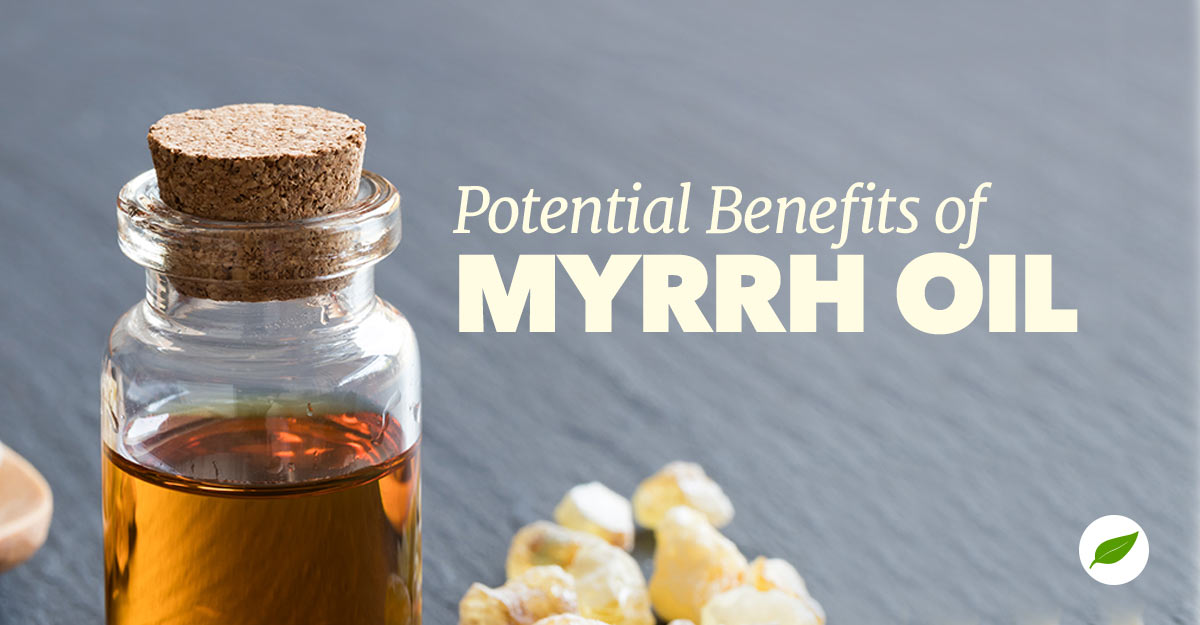 You may not know a lot about myrrh oil outside of the occasional bible story, but if thatâ€™s all you know, thereâ€™s a lot you may be missing. Myrrh is not simply a commodity of the past, but a potentially helpful essential oil and supplement championed by natural health practitioners now and for the past 5,000 years. Odds are that if youâ€™ve had a massage or attended a yoga class in the past, you have come into contact with the soothing aroma of myrrh. Myrrh oil also has a plethora of uses outside of aromatherapy. Read on to learn more about myrrh oil and why you should consider implementing it into your natural, healthy routine.

What is Myrrh Oil?

Myrrh is a resinous substance harvested from the sap of the Commiphora myrrha tree, which is commonly found in the Middle East and Africa. To harvest, small cuts are made in the tree, allowing the sticky sap to flow out and harden. When hardened, it is processed via steam distillation for use in myrrh oil and myrrh supplements. Myrrh has been used by health practitioners for thousands of years, dating back to the building of the pyramids in Egypt and every religion rooted in the Middle East used myrrh in their embalming process and prayer rituals.

The use of essential oils in modern medicine has scientists keenly researching myrrh oil for its numerous potential benefits. Here are six ways myrrh may support in your road to holistic health:

For centuries, natural health practitioners have used myrrh oil for its potential antiseptic properties. Recent studies concluded that the application of myrrh oil to a wound led to â€œsignificant increase in wound contraction rate, shorter epithelization time and higher skin breaking strength as compared to the negative control.â€

Historically, myrrh oil has been burned during prayer rituals or as a sign of suffering, and is typically combined with frankincense. Modern uses include blending it with citrus or sandalwood for an uplifting and meditative effect during aromatherapy.

Some new studies suggest that myrrh oil may be beneficial in the slowing of malignant cells. â€œA significant inhibitory effect was noted in the cell lines following treatment with the myrrh essential oil,â€ scientists report.

Many natural skin care products contain myrrh oil to both enhance the scent and efficacy of application. Some products suggest that myrrh oil may support healthy aging and may have rejuvenative qualities when applied to the skin in a carrier oil or a skin care product.

Research suggests that myrrh oil may support a healthy internal response. Scientists report that â€œfrankincense and myrrh are highly effective in treatment of inflammatory diseasesâ€ when taken orally.

The antioxidant properties of myrrh may support digestive health and may lead to healthy elimination. Myrrh oil may also potentially ease stomach discomfort.

How To Use Myrrh Oil in Daily Life

Myrrh oil is generally applied topically to the skin or diffused into the air for its fragrant properties. However, some dietary supplements are available, which contain myrrh in capsule form, while other users may include a few drops of myrrh oil in a hot tea. Due to potential side effects and drug interactions; however, itâ€™s best to talk with your doctor before taking myrrh oil orally.

Learn More About Myrrh Oil With These Healthy Products

Are you ready to try myrrh oil for yourself? Check out these products available at Natural Healthy Concepts to reap the potential benefits of this ancient oil.

Do you have questions or a story youâ€™d like to share with us about the potential benefits of myrrh oil? Tell us all about it in the comments section below.

5 Natural Alternatives to Ease Feelings of Anxiety
Is Eating Garlic Daily Good for You?

One Response to 6 Potential Health Benefits of Myrrh Oil