You are here: Home › Our Blog › Milk With Aspartame – Safe For Children, Safe for You?
By Theresa Groskopp, CN on March 17, 2013 in Health News, Nutrition Politics 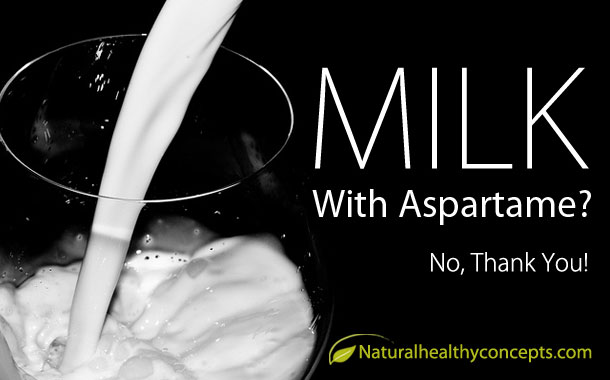 According to the IDFA and NMPF,Â hidingÂ aspartameÂ from consumers by not including it on the label actuallyÂ helpsÂ consumers. Would this make you feel “helped”? In this case, is it ok to hide ingredients from a label, but it is not ok in other instances?Â Why is the petition even being considered?Â Â Clearly another example of how the FDA will decide what is “right for consumers”.

Natural News deciphered the information from the federal register down to the consumer level,

This isn’t only for milk, either: It’s also for yogurt, cream, sour cream, eggnog, whipping cream and a total of 17 products, all of which areÂ listed in the petition at FDA.gov.

As the petition states:

IDFA and NMPF request their proposed amendments to the milk standard of identity to allow optional characterizing flavoring ingredients used in milk (e.g., chocolate flavoring added toÂ milk) to be sweetened with any safe and suitable sweetener — including non-nutritive sweeteners such as aspartame.

This is all being done to “save the children,” we’re told, because the use of aspartame in milk products would reduce calories.

The FDA receives adverse reaction reports every day about products. Thousands of reactions from headaches and migraines to abnormal brain function, epilepsy, brain tumors, etc. have been reported with the use of aspartame. This study on the effects of aspartame on memory and oxidative stress on miceÂ involved a once daily aspartame administration of 1.875 mg to 5.625 mg over two weeks. The findings suggest impaired memory performance and increased brain oxidative stress with repeated use of aspartame. Bear in mind this study was only two weeks so the repeated daily exposure was only two weeks!

How often are you ingesting an artificial sweetener? It will be daily if this petition passes!Â And if it’s not on the label, how much are you getting? If you’re a diet soda drinker, you probably already consume aspartame every day. So how much aspartame is in a can of diet soda? A can typically contains 180 mg of aspartame. Do the math. What level do you think is safe for you, or your child?

These are all questions we should be asking, and more! At the writing of this post, Â looks like there are 23,680 comments received on theÂ government websiteÂ about this proposal! Go figure that perhaps consumers prefer to know what ingredients they are consuming. They might also be concerned about the chemicals their children are consuming. You canÂ commentÂ on this proposal until May 21, 2013. If this makes you angry,Â go to the government website Â andÂ voice your opinionÂ  today! Also comment on this post below whether good, bad or indifferent; we want to know what you think!

Additionally, if this proposal is passed and you haven’t already, you will now want to consider going raw and organic with your dairy products to eliminate the possibility of unknowingly ingesting these chemicals! Then take the next step to help remove residual traces of aspartame and sucralose – learn more about detoxification in Ashley’s post about 5 Reasons to Detox.Â There are many ways to detox and many detoxification products that can help. Start small and take the first step, every little bit helps!

13 Responses to Milk With Aspartame – Safe For Children, Safe for You?