You are here: Home › Our Blog › The Many Uses of Marshmallow Herb
By Angela Halderson, RD on May 21, 2018 in Nutrition Supplements, Skin care 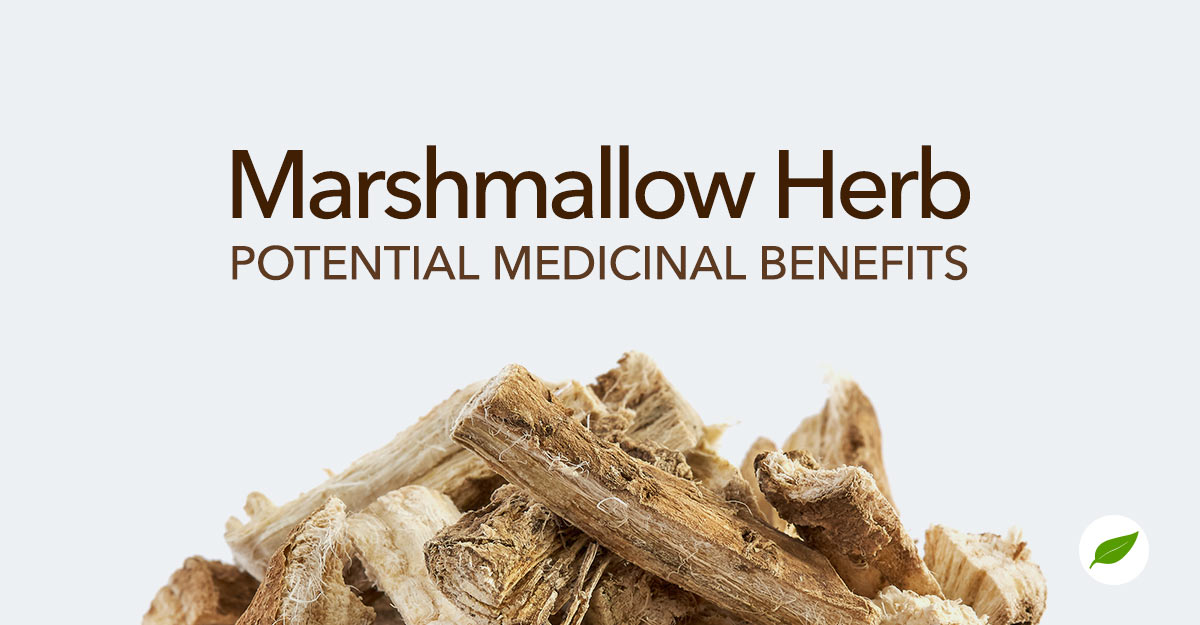 Marshmallow herb has been used for centuries for culinary and medical purposes, but its use as a tonic is not now widely known. In fact, marshmallowâ€™s very genus, Althaea, comes from the Greek verb for â€œto heal.â€ As traditional uses are often a very good clue for scientists for where to look for healing potential, marshmallow herb has been investigated in the lab for decades, with promising results.

It is difficult to evaluate pre-scientific medical traditions by modern medical standards, as record keeping, best practices, and terminology rarely survive translation intact. Nonetheless, itâ€™s clear what marshmallow herb was used for, even if its effects in those cases cannot be wholly known.

The parts of the marshmallow herb found most useful in folk medicine were the leaves and roots. Both of these plant regions contain mucilage, a sticky, gummy substance often made into poultices for irritated skin.

Mucilage is today thought to be the vehicle of marshmallowâ€™s potential benefits. Marshmallow extracts are produced much as they always have been, by mincing or macerating root and leaves until a sticky paste is produced. This paste can be used directly, or placed in alcohol solution where its beneficial compounds are dissolved. The resulting tincture may be ingested as is, or left to evaporate, leaving behind an isolated powder of marshmallowâ€™s most potentially useful materials. Marshmallow herb may also be taken as a tea.

These materials thus derived throughout history were prescribed for many ailments and complaints, including:

Unlike some herbal tonics which the physician records of yore claim to cure all ills, marshmallowâ€™s traditional uses are comparatively modest, a suggestion to researchers that there may be a great deal of good in these claims.

Seemingly always (and in the studies already linked) marshmallow has displayed the same apparent effects found described in traditional medical literature. Western studies have not been many, but the ones that have been completed tend to be well-designed and confident in their findings.

Marshmallow is most efficacious as a regular part of the userâ€™s diet. Marshmallow can be grown in most gardens, and its leaves are delicious and edible for salads and other leafy preparations. The leaves can also be dried for tea, or easily rendered into a tincture by anyone with basic skills.

The root is similarly easy to work with, though most people will be reluctant to uproot one of their few home garden marshmallow plants (these are perennials weâ€™re talking about, after all!). For those who don’t have the resources to make a tincture at home, high quality extracts and supplements are available through Natural Healthy Concepts.

Marshmallow is an herb with which to acquaint yourself. Whether you grow it as an ornamental plant, a medicinal herb, or both, marshmallow is quite at home in any garden. If, on the other hand, you simply want to use marshmallow for its apparent benefits, itâ€™s useful as a tea or supplement, ordered from a trusted supplier, with no more necessity on your part for experience or kitchen medical projects. Whatever you decide, we hope marshmallow is a welcome herb in your cabinet!

Marshmallow Root Tea Recipe: Could It Benefit You?
How American and Chinese Skullcap Herb Differ and Offer Medicinal Support