You are here: Home › Our Blog › How to Spot Signs of an Eating Disorder
By Theresa Groskopp, CN on February 25, 2013 in Health News 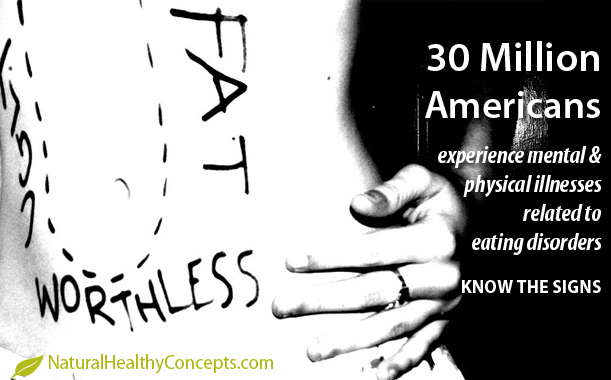 With 30m Americans expected to struggle with an eating disorder over their lifetime, many of us will experience the tragedy of watching someone we care about battle such conditions as anorexia and bulimia.

Many affected by these disorders will begin to experience complex mental and physical illnesses related to eating disorders during young adulthood. But will you notice if it is happening to someone you care about?

I know someone who struggled with a disorder, and I can honestly say I never noticed it at the time â€“ it was many years ago. I was completely in the dark and put the weight loss down to a new exercise regimen. It took a friend who had been abroad for a couple of years to return home and raise the alarm.

If that had not happened I am not sure what kind of outcome I might be discussing now. But this case had a happy ending: professional help was sought; family and friends gathered to show their support; and a life, not to be too dramatic, was brought back from the brink.

Too many stories, however, have a less fortunate outcome.

Numbers from the South Carolina Department of Health are truly tragic when you consider the human stories behind these figures:

Eating disorders have often been considered to be an illness restricted to white, wealthy girls and women. The reality is that these most tragic of mental disorders do not discriminate on the basis of gender, race, or bank account. Of the 30m affected by disorders in the US, 10m are men.

In the UK, conservative politician Brooks Newmark said he had eating disorder when he was 17 and was feeling “enormous pressure” while attending boarding school in the 1970s.

And he added that the experience helped him to appreciate that “unless the mind is healed, you’re never going to heal the body.”

And that brings us to this week: February 24 to March 2 is National Eating Disorder Awareness Week.

During this weeklong event, eating disorder professionals, health care providers, students, educators, social workers, organizations, and individuals will be reaching out to people who may have an eating disorder, in an effort to save lives.

As Newmark said: This is about helping people to heal their minds and their bodies.

I failed to notice that a friend was suffering, although I was there for the recovery process. This week, especially, the signs you should be watching out for include:

The Mayo Clinic has comprehensive list of symptoms that vary depending on the particular kind of eating disorder.

And if you think you might be in the early stage of an eating disorder yourself, the SCOFF screening tool asks five questions that may help realize whether or not you should see help:

If you can positively identify with two or more of these questions, you may be suffering from an eating disorder and should seek help.

This week gives us all a chance to look not only at our own relationship with food but also that of those who are important to us. So, use this week to start a conversation if you have concerns. And I hope you are better at seeing the signs than I was.

Is Your Gut Leaking?
12 Natural Uses For Lemons!