You are here: Home › Our Blog › What Is L-Serine and What Is Research Telling Us?
By Theresa Groskopp, CN on December 5, 2016 in Health Challenges, Health News, Nutrition Supplements 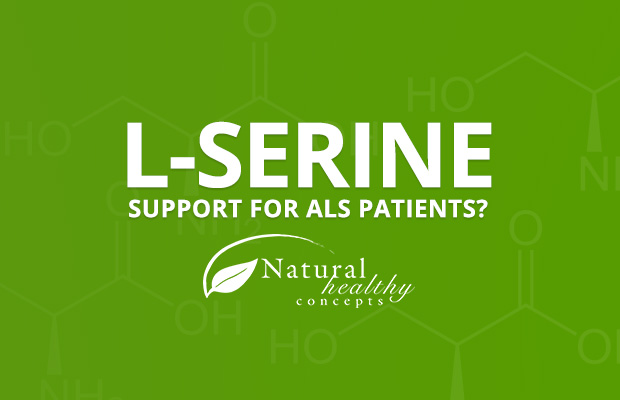 You may have heard the buzz surrounding L-serine and ALS recently. This is due to research findings that are uncovering potential benefits of L-serine in supporting the health of ALS patients. While research is ongoing, this could be an important discovery for those with neurodegenerative disorders!

Serine is a nonessential (meaning the body synthesizes it) amino acid that exists in two forms, or isomers: L-serine and D-serine. L-serine is synthesized from other amino acids, particularly glycine, or other protein metabolites. It is converted to D-serine in the glial cells, which support the nervous system. Since D-serine is not involved in the synthesis of mammalian proteins and is not classified as a “Generally Regarded as Safe” (GRAS) compound by the FDA, you may be less familiar with it and will not find it in supplement form. L-serine is a GRAS compound, so you may have heard more about it.

Despite being discovered about 150 years ago, research has been limited as far as getting a complete understanding of the effects of a shortage or excess in the body. Some of its functions, though, have been identified. Serine plays important roles in the body, such as the synthesis of protein, fatty acid, DNA and RNA, brain and nervous system function, cellular proliferation, antibody production, muscle growth and metabolism.

Serine also works to the benefit of other chemicals in the body as a precursor to the production of certain amino acids, other cell building blocks and lipids. For instance, the formation of glycine from D-serine is a critical reaction, as it has important functions in the central nervous system. As another example, L-serine and a glyercol lipid molecule form phosphatidylserine, an important compound found in neural tissue that is involved in nerve cell repair and the structural integrity of nerve cells.

As you can see, adequate levels of serine are crucial for the entire nervous system. As outlined in the review article, “L-Serine in disease and development,” Disorders of serine biosynthesis have been reported in human disease. “These patients were severely affected with neurological symptoms, and once again illustrate the importance of the serine biosynthesis pathway for brain development and function.” (Source)

So, let’s look into the possible neuroprotective mechanisms of L-serine.

Due to significant findings, particularly in the last year, the FDA is currently conducting clinical trials in the United States to evaluate the safety and efficacy of L-serine for patients with ALS.

A phase I clinical trial (randomized, double-blind) was performed for six months on the effects of oral L-serine in patients with ALS. Though a small study, it did find that “L-serine appears to be generally safe for patients with ALS.” (Source)

The May 2016 research article notes that “L-serine is currently prescribed, in combination with glycine, for the treatment of two different genetic neurological diseases that result in L-serine deficiency, 3-phosphoglycerate dehydrogenase deficiency and 3-phosphoserine phosphatase deficiency, and is under study as a possible treatment for hereditary sensory autonomic neuropathy type 1. Oral L-serine supplementation reduces production of neurotoxic deoxysphingolipids in mice and humans with hereditary sensory autonomic neuropathy type 1.”

Phase II of this trial is underway.

In another study (published in January 2016), researchers at the Institute for EthnoMedicine and the University of Miami Brain Endowment Bank concluded, “â€¦ that chronic exposure to BMAA (the non-protein amino acid and neurotoxin: ?-N-methylamino-l-alanine) can trigger neurodegenerative illness and that adding L-serine to the diet can reduce the risk of disease.” (Source)

Here is the abbreviated abstract:

“Neurofibrillary tangles (NFT) and ?-amyloid plaques are the neurological hallmarks of both Alzheimer’s disease and an unusual paralytic illness suffered by Chamorro villagers on the Pacific island of Guam. Many Chamorros with the disease suffer dementia, and in some villages one-quarter of the adults perished from the disease. Like Alzheimer’s, the causal factors of Guamanian amyotrophic lateral sclerosis/parkinsonism dementia complex (ALS/PDC) are poorly understood. In replicated experiments, we found that chronic dietary exposure to a cyanobacterial toxin present in the traditional Chamorro diet, BMAA, triggers the formation of both NFT and ?-amyloid deposits similar in structure and density to those found in brain tissues of Chamorros who died with ALS/PDC. Vervets (Chlorocebus sabaeus) fed for 140 days with BMAA-dosed fruit developed NFT and sparse ?-amyloid deposits in the brain. Co-administration of the dietary amino acid l-serine with l-BMAA significantly reduced the density of NFT. These findings indicate that while chronic exposure to the environmental toxin BMAA can trigger neurodegeneration in vulnerable individuals, increasing the amount of l-serine in the diet can reduce the risk.”

Read the details of this study here.

The referenced Chamorro people were exposed to BMAA largely because of a diet based on cycad seeds. The neurotoxin accumulates in theÂ seeds, which are commonly used to prepare dumpling and tortilla flour, and to thicken stews and soups. Through the food chain, any animals that consumed these seeds accumulated BMAA in their tissues, so it is passed on to humans who eat these meats. BMAAÂ is also present in some marine ecosystems, including microalgae.

This 2016 studyÂ concluded: “(i) BMAA has been identified in post-mortem brain tissue from ALS/PDC patients from Guam who consume a BMAA-rich diet but not in control patients who have not been exposed to the traditional Chamorro diet, (ii) vervets fed BMAA over 140 days developed NFT and ?-amyloid deposits, and (iii) BMAA was isolated and identified in BMAA-fed vervets that had NFT and ?-amyloid deposits in their brains. This study indicates that chronic exposure to BMAA can trigger neurodegenerative illness and that adding L-serine to the diet can reduce the risk of disease.”

Finally, in his Journal of Clinical Investigation article titled “The debut of a rational treatment for an inherited neuropathy?” Steven S. Scherer reports that “oral L-serine reverses the accumulation of deoxysphingolipids in humans with hereditary sensory and autonomic neuropathy type 1 (HSAN1) and in a transgenic mouse model. As oral l-serine reduces the severity of neuropathy in the mouse model of HSAN1, these data suggest a rational candidate therapy for this devastating condition.” (Source)

What Are Good Sources of Serine?

It’s really no surprise to me that nutrition could be a source of health support, in this case, for neurodegenerative disorders. And considering that there are no medications available to stop or reverse their damage, try getting essential nutrients to promote quality of life.

Serine is found in natural foods and supplements. The chart below shows the foods with the highest concentrations of serine. You’ll find that most are high-protein options; mainly dairy and meat, including certain cuts of pork, beef, elk, veal, bison, lamb, rabbit, deer, chicken, turkey, duck and goose. 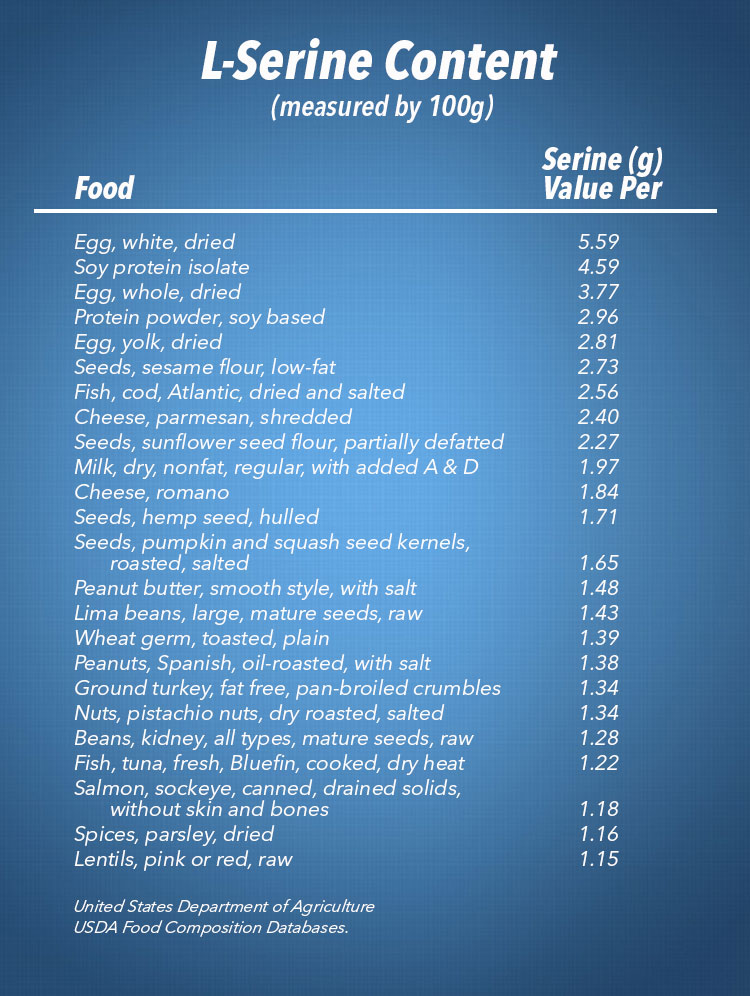 If you do not get enough L-serine from the foods you eat, you may consider taking natural health supplements. Here are two of our popular products: 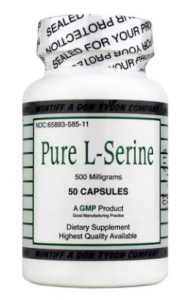 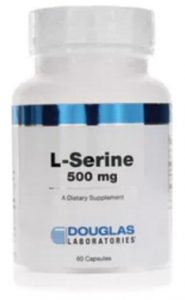 Have you read about recent research results on L-serine? If so, share your thoughts in the comments section below!

26 Responses to What Is L-Serine and What Is Research Telling Us?