You are here: Home › Our Blog › It’s a Lyme Life: Living with Lyme Disease
By Theresa Groskopp, CN on November 20, 2014 in Health Challenges 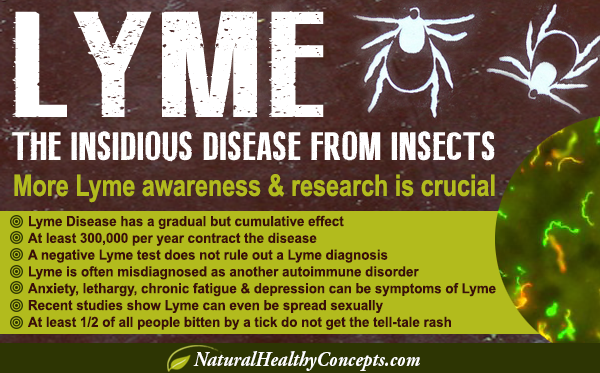 As a Lyme survivor myself, I was very grateful to Lisa for sharing her family’s struggles with Lyme disease. People all over the world are being told they have every chronic health condition but the one they really have – Lyme disease.

They’re told they’re mentally ill, have ALS, Lupus, and a host of other chronic diseases, but they really have Lyme. They’re often ignored and poorly treated by their doctors, families, schools or friends.

Lyme disease and PANDAS/PANS often go hand in hand – it’s important you educate yourself on them all.

If you or someone you love has had chronic health problems and just aren’t getting better – please, for your health and and theirs,

â€œI donâ€™t mean to offend you,â€ my doctor said, about twenty minutes into our appointment. â€œBut I canâ€™t treat you anymore. Youâ€™re not getting better.â€

Oh boy, oh boy. Who could help me?

Count this as Hurdle #4819 on our tumultuous roller coaster into the belly of the medical underworld. Little did I once know that we live on an alternative universe where some doctors believe in a specific disease and others do not, where some doctors treat medically and others urge patients into psychiatric hospitals. What a great sci-fi dystopian novel and movie series these experiences would makeâ€”if they werenâ€™t real.

My own invisible illness probably began with a tick bite. This in itself is unfair because my mom made us play outside when growing up. Idyllic childhood memories include building forts with friends, jumping into huge piles of freshly-raked autumn leaves, climbing trees to pick and eat apples, dancing under the weeping willow, rolling down grassy hills.

Little did anyone know that the blood-sucking ticks we pulled off our dog (and sometimes ourselves) were laden with life-threatening diseases.

Years passed. I grew up and felt fortunate to have a loving husband, a blue house with a white picket fence, smiling babies, a great job.

My once-happy 8-year old son became sick. Over the next two years, he was misdiagnosed, mistreated, and mis-medicated before we found knowledgeable doctors. Finally, we discovered that he had PANDAS (Pediatric Autoimmune Neuropsychiatric Disorder Associated with Streptococcus) and began treating for that, without seeing success. A doctor tested him for Lyme Disease. Bingo.

Learning about Lyme can be information overload. Never mind the controversy between infectious disease doctors and Lyme-literate doctors. The vocabulary alone is a new language. My son had a horrible Herxheimerâ€™s reaction which is an increase of symptoms brought on by bacteria being killed off.

He needed to detox. Burbur drops? Parsley drops? Lemon water? Google pointed me in the direction of medical research and support groups. Support group members became mentors as I adapted to the role of researcher. I read Cure Unknown. I watched Under Our Skin.

Lyme Disease, or borrelia, is often accompanied by other nasty diseases, i.e. co-infections. Bartonella, Babesia, Anaplasma, Erlichia are some of the few my family has faced. There are at least three dozen 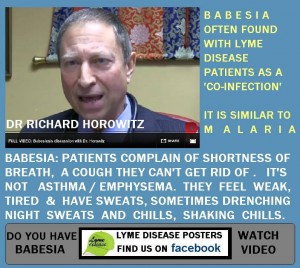 The tests we have available to us only analyze a few species. Most current Lyme tests analyze antibody response. However, people who are very ill with Lyme often suffer from compromised immune systems that result in their bodies being unable to create the antibodies to fight the Lyme bacteria.

The result of all this could be a test that is falsely negative.

I would advise anyone who suspects Lyme to find a Lyme-Literate doctor affiliated with ILADS. These doctors know that a negative Lyme test does not rule out a Lyme diagnosis.

Furthermore, Lyme often causes other systemic diseases, as Dr. Richard Horowitz has written about in his book, Why Canâ€™t I Get Better?

Lyme is often misdiagnosed, especially in women, some of whom are instead offered psychological services. One good friend was diagnosed with Lupus prior to discovering she had Lyme all along. Another was first diagnosed with Fibromyalgia. Lyme is linked to Multiple Sclerosis and other autoimmune conditions.

Unfortunately, most infectious disease doctors know little about chronic Lyme and its co-infections. Yet, according to the CDCâ€™s latest analysis, at least 300,000 people are coming down with Lyme Disease each year. Thatâ€™s more than the number of annual HIV cases in the United States.

Recent studies show that Lyme can be spread sexually and congenitally. Lyme will soon be at epidemic proportions. The gap in information within the medical system is frightening.

It turns out that my son was not the only one in the family with Lyme. For years, Iâ€™d been plagued on and off with fatigue and lethargy, resulting in a doctor asking a once happy-but-tired me if I wanted an antidepressant (this was before my son got sick and um, no!)

But once my son became ill, my fatigue increased; I figured this was the result of Post-Traumatic Stress. Although my daughter had symptoms, my husband and I believed she was copying her brother in order to get more attention. Nevertheless, I finally had us tested for Lyme through Igenex Labs.

Both our tests lit up like a kidâ€™s sketch of alien spaceships; we both had active and old infections. Her baby years suddenly made senseâ€”the early fever, the vomiting, the speech delay (sheâ€™s an avid talker now.)

Iâ€™ve probably had the disease for decades but in the past, my immune system was stronger. I always had a ton of energy and enthusiasm for life. With age and stress, my symptoms have increased. I suffer from brain fog, memory loss, joint pain, hip pain, dizziness, chronic fatigue.

Iâ€™ve noticed some processing difficulty and challenges with organization. I have two Masters degrees, I write and I teach. I know Iâ€™m intelligent and competent but I am also very cognizant of the new gap in my executive functioning skills. Lately, I have so little energy that I must calculate how much I can accomplish each day before I exhaust myself.

Borrelia is a spirochete, a corkscrew-shaped bacteria (similar to syphilis.) It burrows its way into cells. Then it morphs. Lyme can hide out as round bodies (also referred to as cysts) and biofilms. Doctors and researchers have learned that certain medications target different forms of borrelia. Then, there are the co-infections. While Anaplasma and Erhlichia can be â€œeasierâ€™ to treat, Babesia and Bartonella are much more difficult to test for and destroy.

How to treat Lyme Disease

So, how to treat? Some people go on gluten-free, dairy-free, sugar-free diets. Lyme loves sugar and hates oxygen. Moderate exercise is often deemed beneficial, but too much exercise overtaxes the immune system.

Some people do homeopathy or Zheng therapy (Chinese medicine) or essential oils with success. I tried more natural remedies for my kids without seeing great improvement. Although antibiotics can suppress the immune system, strong medication seems to be the best choice for my children and myself at this time.

My kids and I currently take an assortment of antibiotics and natural supplements. At least once a week, I pull out the dozens of bottles that my kids and I need and farm out the pills into daily boxes, from antibiotics to probiotics to supplements. Some of the supplements include Banderol and Samento, Adrecor, Vitamin D, Magnesium Malate, Milk Thistle, Enzyme Defense, Fish oil, Candida Support, Serrepeptase and Saccharomyces Boulardi.

The Myths of Lyme Disease

Myths surround Lyme Disease.When most people think of Lyme, they think of a tick and a bullâ€™s eye rash. They believe that the tick must be attached for 24 hours for Lyme to be injected. They think that Lyme can be cured with three weeks of antibiotics. False and false. In a 2013 lecture at the University of New Haven, renowned Lyme pediatrician Dr. Charles Ray Jones spoke of a tick transmitting Lyme to a 3-year old girl within 15 minutes of attachment.

At least half the people bitten by ticks do not get the tell-tale rash.

Yet another deception is that a couple of weeks of doxycycline (for an adult) are sufficient to eliminate bacteria. A Lyme-literate doctor knows how to keep a new case of Lyme from turning chronic but many infectious disease doctors who follow CDC guidelines do not.

Lyme needs to brought into the daylight, out of the bowels of the earth.

Every doctor needs to comprehend that Lyme is insidious and a potent medical trigger. Awareness and more research is crucial. I started my blog/website, www.PANSlife, after my son had been diagnosed with PANDAS and Lyme Disease. Now I continue it, but write about myself as well. I am only one of millions of people across the globe who is struggling with Lyme Disease.

My doctor may have quit on me but I continue to battle.

Hereâ€™s to Lyme awareness, Lyme research, to change, and to health.

Lisa Kilion is a wife and a mother of two wonderful kids. She holds a BA degree in Psychology, a Masters degree in Business and a Masters degree in Education. Lisa has been an educator for the past 18 years in New York State. In addition to the work she has done onÂ www.PANSLife.com, Lisa has started aÂ PANDAS support group that meets in New York, helping families from the tri-state area. She is also a moderator of severalÂ PANDAS support groupsÂ on Facebook. Lisa volunteers on behalf of the NE PANDAS/PANS Association.

When not teaching, correcting papers, advocating on behalf of PANDAS and Lyme awareness, or sleeping (LymeÂ makes one do that,) Lisa can be found reading, writing, singing, playing guitar, rollerblading or bicycling with family and friends.

Valley View: Lyme is most misunderstood disease since AIDS

2 Responses to It’s a Lyme Life: Living with Lyme Disease