You are here: Home › Our Blog › Is Your Smartphone Affecting Your Health?
By Theresa Groskopp, CN on October 12, 2015 in Health News 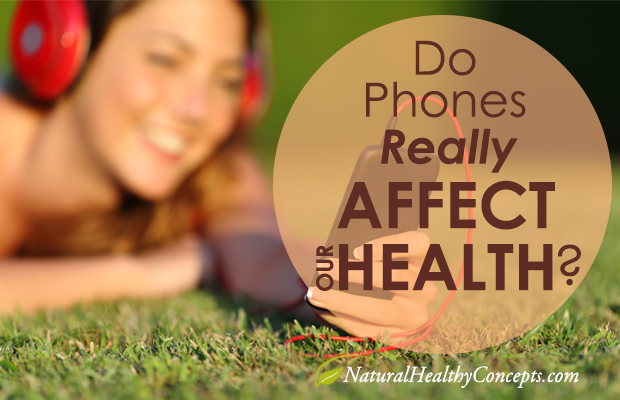 Today’s technology seems to advance in the blink of an eye, doesn’t it? It’s hard to look around without seeing the latest and greatest in laptops, tablets, and cell phones. They’re everywhere.

Cell phones–smartphones, to be exact–reallyÂ are everywhere. It can be pretty hard to find someone who doesn’t own one, and there are good reasons why (which we’ll get to a bit later).

You might love that little device that keeps you connected to the entire world around you, but do you know how your smartphone could be affecting your overall health?

Ahh, smartphones. Those lovely little handheld computers that we all carry around with us all day, every day. Whether you own an iPhone, an Android device, Windows phone, or a Blackberry, it’s pretty hard to deny how much you love and use it. (Don’t think it’s possible to love a cell phone? The survey mentioned hereÂ shows that 66% of Americans are afraid of losing or being away from their cell phone–yikes!) 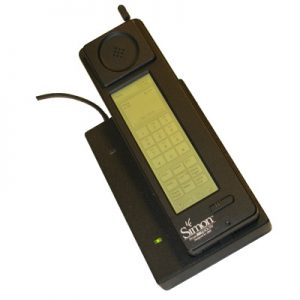 Whether you love your phone or hate it (yes, there are people who hate them), you can’t deny how awesome it can be. Cell phones keep us connected to friends and family through apps like Facebook and WhatsApp, not to mention good old texting. You might even get that random phone call once every now and then.

Then, of course there are the numerous social media apps like Twitter, Snapchat, and Instagram (just to name a few) that keep all of us tied to what’s happening around us in the world. Your phone can do just about anything you want it to, thanks to the millions of apps that are available. Set your DVR. Control your thermostat. Turn your houselights off and on. Send photos and documents to your printer. The possibilities seem endless, really.

Pretty great, huh? Sure is. But while you’re texting, tweeting, updating your Facebook status, reading the news, or doing a million-and-one other great things on that smartphone, have you ever taken a minute to think about how it could be affecting your overall health?

Why Smartphones May Not Be Good for Your Health

Look around you right now. How many people do you see staring down at phones? It’s hard to look around and not see at least one or two. How are you reading this post? Are you reading it on your phone? Most people don’t realize how much they actually look at their phones every day. According toÂ various studies done by the Pew Internet Project, “as of October 2014, 64% of American adults own a smartphone, and 7% of those people are ‘smartphone-dependent'” (Source). Weird, isn’t it?

What about these facts from an April 2012 study?

The rate at which we have become dependent on our phones has pros and cons, much like almost everything else in our lives. We’re always a phone call, tweet, or text message away (though, some people consider that to be more of a curse than a blessing). We have the option to stay in better touch with friends and family than we likely would if we didn’t have a cell phone (or social media platforms like Facebook). We’re more likely to hear about breaking news as it happens, too.

However, these little things that keep us all connected may also not be the best thing for your healthâ€”mentally or physically.

So, How Does Your Phone Affect Your Health?

Have you ever stared down at your phone for so long that you developed a cramp in your neck or shoulders? Do your hands cramp up and feel stiff? How’s your hearing? The overall effect that your cell phone may be having on your health is staggering, and the frightening part of that is the fact that most smartphone owners don’t realizeÂ just how bad it can be.

The Emergence of “Text Neck”

In recent years, a condition known as “text neck” has become a bit of an epidemic, not only throughout the United States, but around the world. According to the New York Daily News, a 14-year-old girl from Colorado was officially diagnosed with text neck in July of this year, and a 2014 study by Dr. Kenneth Hansraj states that “text neck can lead to early wear-and-tear on the spine, degeneration and even surgery.”

You’re probably wondering what all of this means, and rightly so. How could your smartphone be bad for your spine? Well, think about your head. 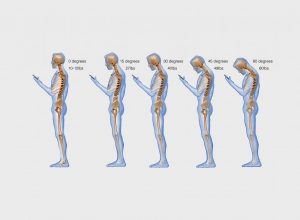 As the graphic above shows, when you’re standing up straight and looking straight ahead, your head weights an average of 10 to 12 pounds. As you look from left to right in the picture, you’ll notice that as you look down (as most people do when looking at their phones), the weight increases, as does the pressure put on your cervical spine.

When your head is bent down at a 60-degree angle, there’s a whopping 60 pounds of weight put on your cervical spine. Yes,Â 60 pounds. That’s a crazy amount of weight! If you can’t quite imagine that, take this explanation from The Washington Post into account:

Imagine carrying an 8-year-oldÂ around your neck several hours per day.Â Smartphone users spend an average of two to four hours per day hunched over, reading e-mails, sending texts orÂ checking social media sites. Thatâ€™s 700 to 1,400 hours per year people are putting stress on their spines, according to the research. And high-schoolers might be the worst. They could conceivably spend an additionalÂ 5,000 hours in this position.

And if “text neck” isn’t enough to make you consider cutting down on your smartphone time, there are other ways that your health may be affected, too.

Neck and spinal soreness definitely aren’t the only ways your smartphone might be affecting your overall health. Because so many people spend such an alarming amount of time on their phones, one of the biggest issues, aside from text neck, may be that of addiction and withdrawal.

Huffington Post writes that “the addictive quality of smartphones is real: 66% of people are actually afraid to lose or be separated from their cell phones, according to a 2012 study” (Source).

Because of these fears of being separated from a phone, when this kind of thing actually happens, there’s bound to be withdrawal. A 2011 study by the International Center for Media & the Public Agenda and the Salzburg Academy on Media & Global Change found that “unplugging” (being without a cell phone for a full 24 hours) led to symptoms of withdrawal, including feelings of anxiety and isolation, as well as fidgeting, and, in some cases, even mild depression.

A fairly large amount of people use their cell phones to listen to music, podcasts, and even to watch movies. Prolonged periods of music at a loud volume may have negative effects on your hearing. The hair cells present in your inner ear are what turn sound into signals for your brain. Loud volume may damage those cells, which may also lead to hearing loss.

It’s also no secret that cell phones emit radiation wavesâ€”we’ve been hearing about it for years now, and for good reason. The World Health Organization has classified this radiation as “possibly carcinogenic to humans,” which is the same classification that things like chloroform and DDT have. (If cell phone radiation really worries you, check out this Q-Disc from Premier Research Labs!)

Does holding your phone give you hand cramps? Ouch. This is what’s known as “text claw.” It’s not a medical term, but many people may experience it. According to Huffington Post, “repetitive fine motor activity, including texting, can exacerbate conditions like tendinitis and may cause wrist and forearm pain” (Source).

Where is your phone when you’re asleep? According to a 2010 survey by Pew Research Center, “65%, or nearly two-thirds of adults with cell phones say they have slept with their phone on or right next to their bed.” It also states that “heavy cell phone usersâ€”both those who use their phones to constantly text message and those who use it to make numerous voice callsâ€”are more likely to sleep with their phones” (Source).

Putting your phone down to get a good night’s sleep is something many people struggle with. The light from the screen, as well as any tiny blinking LED lights may have an effect on your brain’s ability to produce melatonin, which, as we all know, is key to a night of good sleep.

Technology is here to stay. There’s no argument about whether or not your cell phone can make your life easier. They can be great things to have sometimes, but it’s important to remember that they may have negative effects on your life, too.

Instead of watching Netflix on your phone or constantly texting a friend, why not head outside for a while? Take a walk. Meet up with that friend for lunch or a cup of coffee. Put your phone down for a while every now and then. Your body will thank you for it.

Have you experienced any of these health issues? How long do you spend on your phone each day? Share your stories in the comment section below.