You are here: Home › Our Blog › What is Inositol Hexanicotinate?
By Angela Halderson, RD on April 13, 2018 in Nutrition Supplements 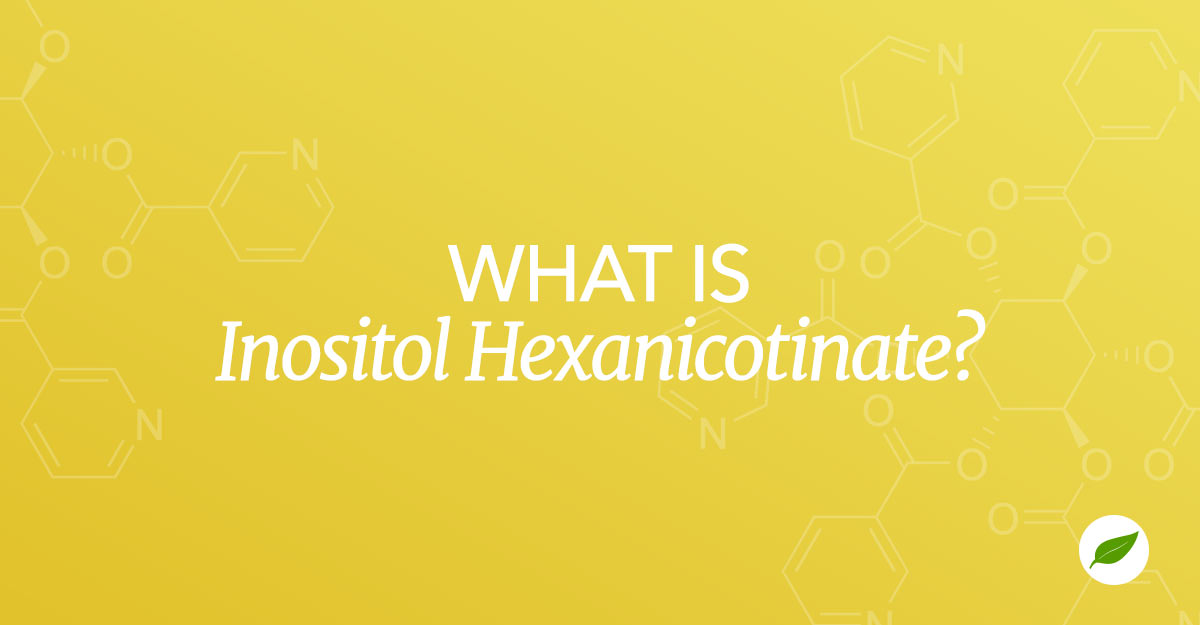 Inositol hexanicotinate is a name that crams more syllables into just two words than most of us are probably used to. Itâ€™s also the name for a form of niacin that lacks a flushing effect.

Many people want the potential benefits of niacin without the uncomfortable reality of flushing: the redness, hot flashes, and itching. Even though these symptoms are temporary (just a few minutes), they can be distressing enough to keep someone from taking niacin at all, even if they need it. This is why scientists found a way to deliver much the same effect without the potential discomfort.

Inositol Hexanicotinate: What it Isnâ€™t

If you were to Google â€˜inositol,â€™ youâ€™d find many sites talking about vitamin B8, a vitamin no longer referred to as a B vitamin, yet still plays an important role in the body. Inositol hexanicotinate isnâ€™t just another form of inositol; instead, itâ€™s more closely associated with vitamin B3, known as niacin. Things get interesting, however, when inositol hexanicotinate starts to be digested.

What happens When Inositol Hexanicotinate is Digested?

Inositol Hexanicotinate has two metabolites (the chemicals that this substance breaks down into in the body): niacin and inositol. Because niacin is produced only after the substance is largely through with the digestive process, it doesnâ€™t produce the same flushing effect of niacin consumed directly. Users also have the added benefit of inositol, giving this supplement something of a â€œtwo for oneâ€ effect.

Weâ€™ve covered in other posts just how potentially beneficial both niacin and inositol are for the human body, and the problems that can arise when the body is deficient in one or both. Weâ€™ll review here a few of these potential problems.

What Inositol Hexanicotinate is Not

The reason that inositol hexanicotinate is advertised as â€˜flush-free niacinâ€™ and not â€˜niacin and inositol in one pillâ€™ is that it is difficult, if not impossible, to correctly understand just how much of inositol is being delivered and absorbed by the individual patient.

At least with isolates of either niacin or inositol, there is no question about how much of each medication is being provided. And with inositol hexanicotinate, the metabolization and absorption of niacin are predictable and fairly consistent. The bodyâ€™s absorption of the resulting inositol is not as well understood, so inositol hexanicotinate should not be used as a primary delivery mechanism of vitamin b8 for someone who is deficient.

For people who want to take niacin but who find that its flushing effect is too uncomfortable or inconvenient (after all, who likes to look like theyâ€™re having a minor allergic reaction at work?) may find an ally in inositol hexanicotinate. If niacin is necessary from a medical perspective, itâ€™s wise to consult with a physician or dietary authority to make sure that this alternative is right for you.

For most people, however, inositol hexanicotinate is potentially a well-tolerated supplement with potential benefits for many aspects of the body and mind. Itâ€™s widely available in pill, capsule, and powder forms from synthetic or natural sources. Maybe this supplement could be just what youâ€™re looking for.

Inositol Supplement: Review of Benefits, Side Effects, and More
What’s the Best Milk Thistle to Use?