You are here: Home › Our Blog › How Dr. Hyman Helped an Autistic Boy With a Functional Medicine Approach
By Ashley Steinbrinck on June 18, 2013 in Health News, Nutrition Supplements 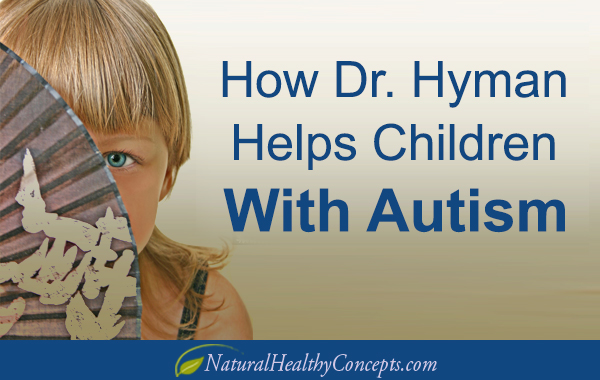 “The real reason we are seeing increasing rates of autism is simply this: Autism is a systemic body disorder that affects the brain. A toxic environment triggers certain genes in people susceptible to this condition. And research supports this position.”

I know there has been controversy over whether vaccinations cause autism. Though, it’s not the only cause, thimerosal or ethylmercury does have an ill effect on a human’s body systems, especially the nervous system and brain function. A few years ago, pharmaceutical companies started to take this harmful preservative out of most vaccines, but it is still used in some, especially flu vaccines.

If you bring up the autism-vaccine correlation, many people will stop you in mid-sentence and tell you there are studies that prove that correlation to be false and the case is closed.

But, here we go again “seeing what we believe instead of believing what we see.”

What I mean is this…

Every single one of those studies that people are referring to have been funded and written by federal agencies in charge of the vaccine program or large vaccine manufacturers. These studies which only have ever looked at the MMR vaccination have been misrepresented by public health officials who are trying to save the lucrative vaccine program. Dig further into the conflicts of interest and the criteria for how the studies were ranked to see for yourself just how much of a cover they were. I will leave you with one more thoughts on this topic… since the facts are often what speak the truth.

The current recommended (and in many states forced) number of vaccinations given to children is a total of 40 by the age of 18. In the 1980’s that number was 10.Â

In that same time period, autism rates have gone from 1 in 10,000 to 1 in 88 children, and it continues to be the fastest growing developmental disability in the US.Â

I’m not blaming vaccines alone as the cause of autism. There are many triggers, but vaccination tends to be thought of by many health experts as a main culprit that has the ability to push a child to that point.

The thing that is most important to realize, is that many of these children already have a disrupted immune system, an unhealthy gut, and susceptible genes. Then when they are given more than a dozen vaccinations containing toxic ingredients before the age of two, (on top of the food additives and preservatives, GMO’s, and other environment toxins) their body functions start to fail.

The dry skin, the unhealthy bowel movements, the bloating, acting out, hyperactivity, etc., is the bodies way of reacting to all of this.

One boy in particular that Dr. Hyman has said he cured from autism all together is named Sam. Right after his MMR vaccination at 22 months, things changed and he became unresponsive, lost his language abilities and was unable to relate or interact with his family. That’s when Sam was diagnosed with autism.

“When I first saw him, this little boy was deep in the inner wordless world of autism.”Â Dr Hyman explains, “Watching him was like watching someone on a psychedelic drug trip.”

After Dr. Hyman did testing, he discovered that Sam was very toxic. From his blood and hair he found high levels of heavy metals. He also discovered that Sam had very high level of antibodies toÂ gluten. He was not only allergic to wheat, but to dairy, eggs, yeast, soy, a total of about 28 different foods. He had a leaky gut that was very inflamed. He was deficient in zinc,Â magnesium,Â manganese, vitamins A, B12, D3, and omega-3 fats. Like many kids with autism, his body had issues creating energy in his cells, or mitochondria.

Dr. Hyman says Sam’s body had low levels ofÂ glutathione which is a key antioxidant for getting rid of toxins and pesticides. He also hadÂ trouble getting rid of toxins because he lacked methylation (a key biochemical function required to make normal neurotransmitters and brain chemicals) that are critical for naturally detoxifying the body.

His amino acids necessary for normal brain function and detox were depleted, and he also had super high levels of free radical activity with evidence that his brain was inflamed.Â On top of all of this, he had two genes that set him up to be more susceptible to these problems.

The good news is, after 10 months of treating Sam based on his biochemical individuality, he lost his diagnosis of autism.

As Dr. Hyman points out,

“The whole basis of functional and systems medicine is the concept of biochemical individuality.Â That means that if you take 100 kids with autism, each one may have unique genetics, and unique causes or triggers for their autism and need very different treatments to get better. Autism is just a label. Like every condition or illness, the key is to dig into the layers and peel the onion to discover what is really happening. It is not usually one thing but a collection of insults, toxins and deficiencies piled on susceptible genetics that leads to biochemical train wrecks we see in these children.”

Obviously, the sooner you start treating the body, the better.

First things first, get to a functional medicine Dr. or alternative medical practitioner who knows and believes in theÂ principles of systems biology and medicine.

Sam’s parents were told by the doctor that diagnosed him with autism that nothing could be done about his condition except behavioral and occupational therapy techniques. They were told the progress would be slow, and that they should keep their expectations low.

Some advice that was right? Since, Sam was able to be helped 10 months later.

Thanks to people like Dr. Hyman, who know thatÂ treating the underlying causes of illness through aÂ whole-systems medicine approach is the right way.

Improving nutrition, healing the gut and detoxifyingÂ the body are essential. Keeping in mind that the specific treatment of vitamins, minerals and other supplements are based upon the individuals biochemical uniqueness.

I’m not going to lie, this is going to be very difficult and more expensive then convenience foods. The agricultural revolution has made it nearly impossible to find healthy whole food in our markets. Especially because it starts with the soil that has been compromised and the treatment of animals that has also been compromised. So, even if you’re eating organic, it’s best but still may not be 100% pure.

And Watch this 8:00 video of Dr. Hyman himself speaking about how to optimize your nutrition. (if you don’t have time now – just come back later)

Supplement with this list of nutrients if it makes sense for your child (testing is always a smart idea).

Diseases and health conditions are most often related to toxicity. When toxic waste builds up in our body, we get sick. Â Everyday toxins along with the vaccines are no help to autistic children. You need to rid their bodies of heavy metals and other toxins as well.

Just remember, a time ago – the medical community also claimed there to be no connection between cigarettes and lung cancer. Although very different topics, the vaccination/autism controversy has many similarities. I just hope I live to see the same outcome for vaccinations as we did for cigarettes.

13 Responses to How Dr. Hyman Helped an Autistic Boy With a Functional Medicine Approach