You are here: Home › Our Blog › Hormonal Birth Control Side Effects: How the Pill Can Wreak Havoc on your Mood
By Theresa Groskopp, CN on June 23, 2015 in Health News, Health Tips 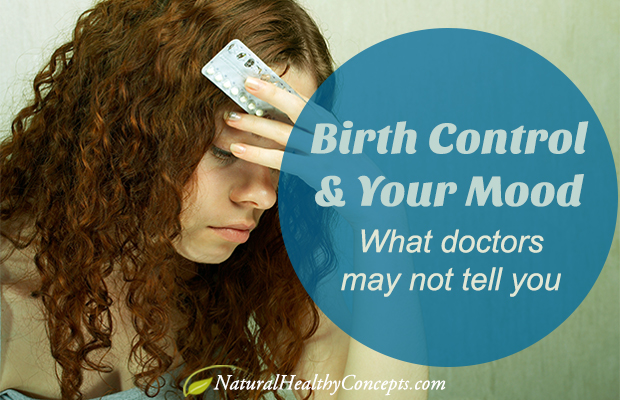 The past year and a half has been one of the most difficult times of my life. I graduated college, succeeded in getting a job in my field, moved in with my amazing boyfriend, made new friends and started preparing for a stable future while also enjoying the here and now. “So what’s been so difficult?” you ask. I also started using hormonal birth control.

Birth control has done amazing things for women across the world,Â giving them control over their bodies and reproductive rights. Since their conception, hormonal oral contraceptive pills have been among the most popular ways for women to avoid becoming pregnant. They’ve even helped some women deal with uncomfortable, even debilitating, menstrual problems. But for some women – myself included – they’ve sent them on a painful, emotional roller coaster.Â

Like any medication, hormonal birth control (pills, patches, rings and shots) comes with certain health risks. When you get a prescription, you’re given the obligatory warning of side effects ranging from the mild like nausea, spotting, headaches and weight gain, to the potentially deadly but rare like blood clots. But one possible side effect many doctors don’t give enough warning about are serious mood changes.

The majority of women don’t experience negative changes in their mood when taking birth control, and some women who’ve previously suffered with PMS actually report improved moods. Search Google for information on how birth control can affect mood or cause depression, and the majority of sources will tell you it’s a myth and that studies show no established link. And yet, if you scroll down to the comments section you’ll find dozens of women relating their scary experiences with birth control – uncontrollable outbursts of anger, snapping at the smallest things, sobbing episodes, irrational anxieties, and lying in bed, too depressed to get up.

Once I was in a serious relationship, I decided the smart thing would be to start taking birth control instead of relying on condoms alone. I went to a gynecologist at a reputable facility specializing in women’s care – the same one my mother trusted. My doctor and I decided on the NuvaRing. I told her about my family and personal history with anxiety and depression and asked if there was any risk for problems because of that, even though I hadn’t experienced any symptoms or episodes for years. She assured me that it shouldn’t be a problem.

But it was. I was tense and easily irritated. I was defensive and increasingly anxious. And then that anxiety attacked. I removed the NuvaRing, and things almost immediately started to go back to normal.

After things were stable again, I went back to the doctor – a different one. She was understanding and told me about her own difficulties finding birth control that worked for her. She prescribed me one that had worked for many of her other patients.

Things seemed fine, but after a few months,Â I noticed myself getting upset about little things more often. I felt oversensitive and I would cry and obsess about things and just feel down. This was foreign to me; I was one of those rare, lucky women who hadn’t ever had problems with PMS. A little bit of cramping now and again, sure, but my mood always stayed stable. Didn’t some women take birth control to get rid of PMS? Why was I getting PMS?

Things continued to get worse and I returned to my doctor. She picked another formula, but things didn’t get better. I tried going on a fairly high dose of an anti-anxiety/depression medication. I tried exercising more. I increased my intake of mood-boosting vitamins and drank calming herbal tea like it was going out of style.Â But I kept crying and withdrawing into myself so we tried another pill.

Not long after, I had another of the same old depressed episodes, but it turned uglier than ever before.Â I had no idea I could cry like that. It was scared and desperate, the kind that makes your whole body shake as a million irrational thoughts run through your head. It was the final straw.Â I stopped taking the birth control, switched to a non-hormonal IUD, and have been improving every day since.

How Birth Control Works – And Doesn’t

A woman’s ability to conceive is controlled by her natural hormones – a balance of estrogen, progesterone, testosterone and other hormones and chemical signals turned on and off. These hormones also play a major role in brain function and mood. And while there’s a thorough understanding in the scientific and medical community of how hormones influence reproduction – allowing for the development of medications to prevent women from becoming pregnant – the understanding of how they influence the brainÂ is not nearly as clear.

The main hormone at play is estrogen, which is known to impact mood. It can increase serotonin, modify the production of endorphins and may stimulate nerve growth. Women deal with depression and anxiety more frequently during their estrogen-producing years than they do after menopause as well as more often than men, so clearly there’s a link to emotion, but what is it?Â A doctor-reviewed article from WebMD states:

Estrogen’s actions are too complex for researchers to understand fully.

A woman’s estrogen levels vary widely from day to day, and two women can be on the same day of their cycle and still have different levels of estrogen. There’s no “normal” level to work off of so doctors and researchers are unable to predict how a woman will be affected emotionally.

It seems that estrogen affects every woman’s brain differently. Describing a study that appeared in The Journal of Neuroscience,Â a Robert Wood Johnson Foundation article gives a perfect example of this. The researchers monitored the menstrual cycles of a group of women for five months, measuring brain activity when estrogen levels were naturally high and low to try to establish the impact of estrogen on cognition. They found that its effect was not independent, but highly dependent on a woman’s baseline level of dopamine – a neurotransmitter that influences movement and emotion as well as the brain’s reward and pleasure centers. For women with naturally low levels of dopamine, cognition was boosted when estrogen levels were high, while women with high dopamine levels got a boost when estrogen was low.

A more recent study published in the journalÂ Human Brain Mapping found that synthetic hormones in oral contraceptives, possibly along with the suppression of natural hormones that happens on the Pill, may shrink certain areas of the brain. Studying 90 women, UCLA neuroscientists found that in women who used oral contraceptives, the brain’s lateral orbitofrontal cortex and posterior cigulate cortex were thinner. The lateral orbitofrontal cortex is important in the regulation of emotion and response to rewards, and the posterior cigulate cortex is involved with inward-directed thought, exhibiting increased activity when we recall memories or plan for the future. The researchers hypothesize that changes in the lateral orbitofrontal cortex could be the cause of the increase in anxiety and depressive symptoms some women experience when they start taking oral contraceptives.

The Status of Hormonal Contraceptives

So with all the mounting studies showingÂ there may be significant emotional side effects possible with oral contraceptives, and with more women coming forward about their difficult experiences with them, why does it seem the problem is still so largely ignored?

Currently, the majority of women don’t have serious negative emotional side effects. And if the majority is fine, why worry about the minority?

In addition, mood issues may lessen or disappear over time for some women. Adjusting to the introduction of synthetic hormones and the suppression of natural ones can take time, so while your mood may be a bit off when first starting birth control, it levels out for many women after a few months. And if symptoms fade, they’re viewed as less of a problem. In fact, even if a woman experiences what she feels is depression, if the symptoms are for the most part temporary, they’re not often considered a serious concern and disregarded as a possible side effect.

Many women are told to just wait it out, to give it time until their body adjusts. Some doctors may even prescribe an antidepressant along with the birth control. And because our moods can be affected by so much, many assume that a woman insisting her birth control is affecting her mood is ignoring other possible causes like stress or a change in lifestyle.

But for women like me, who experience very severe, life-disrupting emotional changes, there’s no other answer. Even if I was stressed about something, if I was healthy physically and mentally, I should not have reacted as extremely and irrationally as I did. And being told to give it time when I’m spending my days fighting back tears and depressive thoughts, and spending my nights sobbing in the bathroom, putting more and more stress on my relationships, agonizing how I’ll ever make it through this? Well, being told to wait it out is much easier said than done.

Every woman is unique and may react to hormonal contraceptives differently. Currently, there’s little way to know how things will go before you start, but you should make as informed of a decision as possible.

If you’re considering beginning oral contraception – or have recently begun – know yourself and your history. Consider the following:

If you answered “yes” to any of the above questions, you may be more likely to have difficulties with the Pill or other forms of hormonal contraception.

If while taking hormonal contraceptives, you suspect you may be experiencing unusual emotional symptoms, monitor you mood closely.

Make note of anything unusual. You may even want to keep a journal so you can recall what you experienced – and when – if you need to go back to your doctor. Details are important.

Above all, listen to yourself. Don’t let anyone, whether it’s your doctor or a close friend, tell you how to feel. Take reliable, professional advice into consideration, listen to the experiences of female friends and family and take time to think things over, but always do what feels right to you. You’re the only one who knows how much you can take. With other methods of contraception available, putting yourself through emotional agony just isn’t worth it.

How to Help Balance Hormones

If you’re tired of the emotional roller coaster and decide to stop taking hormonalÂ contraceptives, it may take your body time to readjust. Although the synthetic hormones should leave your body within a few days, your body may have gotten used to not having to produce many of its own hormones, so it may take some time for your system to get back into the swing of things. How much time varies from woman to woman. It could be a month, it could be a year.

To help with the transition, there are some natural ways to help balance hormones and your mood recommended by www.goingoffthepill.org.

If you’re currently on birth control, be careful of herbs with hormone-like effects, as these could alter the effectiveness of your birth control. Talk to a pharmacist, doctor or individual knowledgeable about herbs and drug interactions.

Have you experienced changes in your mood when using hormonal contraceptives? Share your story with us in the comments.