You are here: Home › Our Blog › Are Your Holiday Indulgences Giving You the Blues?
By Jackie Peters on November 7, 2016 in Diet, Health Challenges, Health News, Health Tips 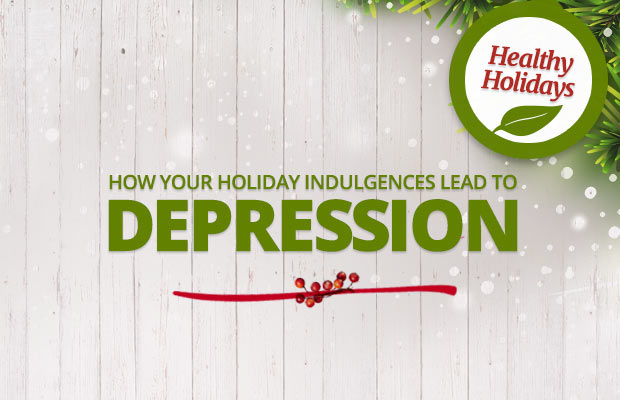 It all starts just before Halloween as we stock up on treats for the little ghosts and goblins who will make their ghoulish visits, and goes through the New Year’s holiday ? poor nutritional choices are everywhere we look. From the abundance of candy around All Hallows’ Eve and the traditional pies at Thanksgiving, to the Christmas cookies and the New Year’s alcohol, â€˜tis is the season many of us overload on sugar.

We all know that sugar can cause bad things like cavities and weight gain, but did you realize that it can create inflammation in your body? And, that inflammation appears to contribute to depression?

Studies supporting the role of inflammation in depression are extensive. Integrative Psychiatry goes as far as to state:

Extensive research has shown that brain inflammation is connected to virtually all types of mental illness.

The interactions between inflammation and the brain are what seem to spur the development of depression. (Source)

The inflammatory response is part of the immune system and is the body’s attempt to protect itself when something irritating or harmful (e.g., infection, toxins, environmental irritants, etc.) affects it. It’s a sign that the body is trying to heal itself.

Immune cells communicate and cooperate in a complex way once a foreign substance is identified. Often, it begins with the release of a family of pro-inflammatory proteins called cytokines and the hormone prostaglandin E2 (PGE2), which then triggers the brain to go into “sickness mode.â€ Blood circulation increases around the area, body heat rises and the attack continues until the foreign antigen is eliminated.

However, if foreign substances are not eradicated from the body or there is a continued assault, one may be left with chronic inflammation. In these cases, the immune response can stay activated for weeks, months or years. A state like this is not healthy for the body and can lead to tissue damage and diseases like depression.

Consider these observations about inflammation and depression:

Several lines of evidence suggest that an inflammatory process is involved in the development of at least a subgroup of patients suffering from depression. (Source)

Signs of an inflammatory process, in particular increased pro-inflammatory cytokines and increased levels of prostaglandine E2 (PGE2), have repeatedly been described in major depression. (Source)

In many studies, “healthy individuals could be temporarily put into depressed, anxious states when given a vaccine that causes a spike in inflammation.” Brain scans then revealed changes in the prefrontal regions of the brain, where concentration and motivation are affected.

So, just what causes inflammation? Many things, including stress, genetics, lack of sleep, fat stores and poor diet. And, many of these can be issues throughout the holiday season, particularly poor diet.

Holiday Foods that Cause Inflammation

It’s true, some foods can be a chronic irritant for the immune system!

A diet rich in trans fats and sugar has been shown to promote inflammation. Additionally, people already carrying a lot of body fat, especially around the belly, are accumulating large quantities of pro-inflammatory cytokines.

By far the most important factor in brain aging and inflammation in America is sugar. The sheer flood of sweet things and process refined foods into our bodies is a tidal wave that leaves destruction everywhere we look â€¦ The insulin triggered by this flood of sugar sets into motion an entire inflammatory parade.

He asserts that consuming sugar and certain carbohydrates causes the production of cytokines.

It is believed that digestive imbalances from poor nutrition, stress, medication and toxins can damage stomach tissue and cause inflammation, which can then spread throughout the body. This makes sense if you understand the gut-brain connection. Many physical and mental issues begin in the gut!

Certain foods can cause inflammation in the walls of your intestine due to bacteria, allergies, irritants or toxins. The body considers someÂ foods to be foreign substances. This causes issues throughout the digestive system and allows more toxins to enter the bloodstream. As all of your body’s energy is focused on the inflammation, other areas are neglected and your immune system is compromised.

Your body sees foods that don’t agree with its sensibilities as a foreign invader, so the macrophages attack these foods and tell everyone that this war is going on. This causes your whole body to start firing away at these foods and at innocent bystanders â€” and thus causes inflammation in your bloodstream. In that way, eating unhealthy food is really like having a chronic infection that triggers an immune response, which then causes inflammation.

One example of the effects of this is the body’s inability to deliver glucose to the brain, where cells need it to function properly. Since inflammation prevents this, your brain keeps wanting more glucose, so you may eat more sugary foods, which starts the whole process over again.

Regular consumption of these foods are largely responsible for inflammation:

We already knew these foods were considered unhealthy, but many of us may not have been aware of the extent to which they affect our bodies.

Over the holidays, we will encounter these types of options in our homes and at most all of the celebrations we attend. If you’d like to try to avoid a heavy case of the holiday blues, and you’re susceptible to inflammation, avoid them as much as possible!

Get inflammation under control by eating right. There are anti-inflammatory foods that decrease pro-inflammatory biomarker levels, increase the concentration of beneficial bacteria in your gut and turn off inflammatory genes.Â The Mediterranean diet seems to be a good match as far as its focus on colorful fruits, veggies and low-fat protein â€” more natural, less processed.

Concentrate on these foods to keep inflammation at bay:

As for seasonings, ginger, turmeric, garlic and onions appear to be best for this goal. In addition, tea is a great beverage selection! 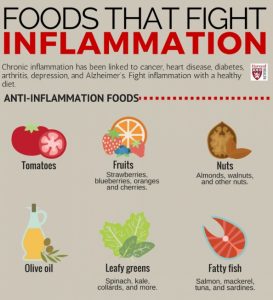 Hopefully, this gives you some direction on what foods to avoid and which to enjoy over this extended festive season to reduce inflammation and beat the holiday blues.

Have you had success with an anti-inflammatory diet in affecting your mood? Tell us about it in the comments section below!