You are here: Home › Our Blog › Holiday Dining Traditions that Actually Have Some Health Benefits
By Theresa Groskopp, CN on December 11, 2014 in Healthy Recipes 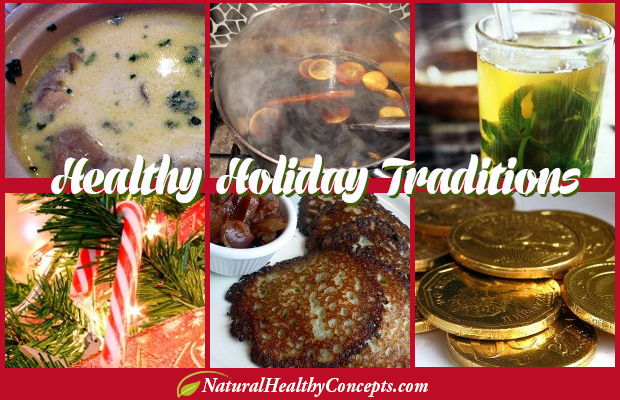 Over the holidays, most of us groan and moan about gaining too much weight.

That’s pretty ridiculous when you think about it. We’re fortunate enough to have family and friends around us enjoying meals together, and all we can do is complain about our waistlines.

You can make the holidays healthier if you really want to. In fact, while there are plenty of treats to eat, some of the traditions surrounding food actually do have nutritious benefits.

People celebrate Christmas all over the world. But for the purposes of this article, we’re going to focus on dining traditions that are common in North America. 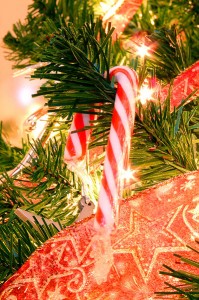 Peppermint sticks in Christmas stockings and candy canes hung from the tree – this refreshing plant gives us one of the most recognizable flavors of the holidays. It offers some health benefits too.

Peppermint leaves and peppermint oil have been used as a therapeutic herb for centuries.

One of the more common uses for peppermint is settling an upset stomach. It could help relieve all kinds of digestive distress, from IBS to a spastic colon. It can also provide anti-inflammatory activity that may benefit sufferers of hay fever and asthma.

Of course, it’s also pretty effective at covering up bad breath – or halitosis if you want to get all technical. 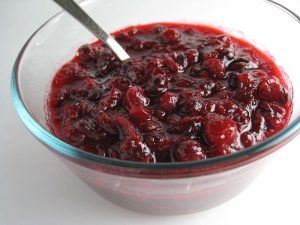 Cranberries are ready to eat just in time for Thanksgiving, and we keep using them as we move through the holiday season.

Cranberry sauce and cranberry cocktails are tart and tasty as well as colorful and festive.

But did you know cranberries offer some of the highest antioxidant content of all fruits? Only blueberries have more.

If you want all the health benefits of cranberries without all the sugar that’s in the juice from the grocery store, consider trying a Cranberry Extract supplement. 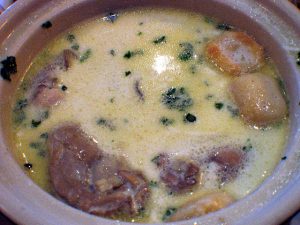 My dad’s side of the family has always made oyster stew around Christmastime. I didn’t realize until recently that eating oyster stew on Christmas Eve is actually a longstanding American tradition.

According to History.com, early settlers were quite fond of oysters. American Indians introduced them to the shellfish, which was packed with nutrition.

The oyster stew tradition came about in the Irish-American community. Because many of them were Catholics, they avoided “meat” as a religious observance around certain holidays. But seafood was still acceptable.

Oysters are packed with different minerals and also provide a considerable amount of Vitamins C and B12. They provide protein without a lot of fat – and perhaps most importantly – they are a great source of Omega-3 fatty acids.

That’s a nutrient your body can’t make on its own. So you need to get it through your diet or supplementation. 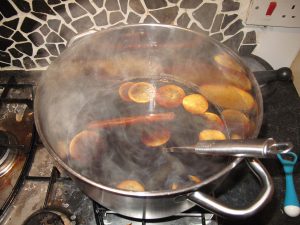 A steamy cup of spicy apple cider after spending time outdoors in winter always hits the spot – especially when it’s in your favorite holiday mug.

The reason is likely because the whole apple is used to make cider, and it is unfiltered. That’s why cider is usually darker and cloudier than apple juice. The cloudiness comes from the skin and seeds of the apple, which have a higher concentration of antioxidants called polyphenols.

Apple cider is close to twice as beneficial as an antioxidant when compared to clear juice.

A common holiday hot drink that uses apple cider as a starting point is Wassail. That’s what they’re singing about in the Christmas carol – “Here We Come a Wassailing.” The cider is typically brewed with orange slices, cinnamon bark and other spices.

Fried potatoes and jelly-filled donuts are a big part of this eight-day long Jewish holiday. But there are opportunities to eat healthily too.

A lot of Hannukah food is made with oil and fried. That’s because of the history of the holiday. The Talmud talks about how, during the re-dedication of the Temple, one night’s worth of pure olive oil miraculously lasted for 8 days and nights. 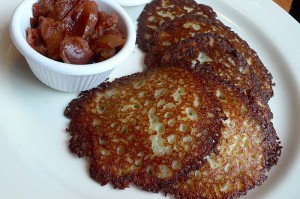 Without a doubt, the most traditional of all Hanukkah foods is the latke – or potato pancake.

Typical white potatoes don’t offer a ton of nutritional value, but you could substitute sweet potatoes and some recipes use purple potatoes – both of which provide more nourishment. That’s because colorful potatoes have more carotenoids and flavonoids.

The olive oil used to make latkes contains monounsaturated fatty acids, or MUFA. This is a much healthier form of dietary fat that can support cardiovascular health and normal cholesterol levels.

Another oil that provides healthy fat, and may be a good choice for making potato pancakes, is coconut oil. It could add a light and sweet flavor to your latkes – and would taste great with sweet potatoes.

You can also use squash instead of potatoes, or add other healthy veggies into the mix. Check out Greatist.com’s list of 20 Healthier Potato Pancake Recipes.

During Hanukkah, latkes are often topped with sour cream and apple sauce. Some people suggest replacing the sour cream with Greek yogurt.

Applesauce can provide you with some great health benefits. But if you make your own sauce, it may be wise to choose organic when it comes to this fruit. In her apples recipe roundup, Mary Bloomer tells us that apples could contain a lot of pesticides. 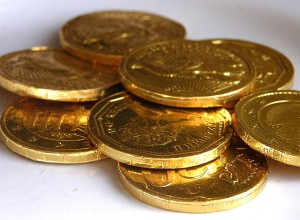 Another beloved Hannukah tradition is the giving of chocolate gelt, which are gold-foil wrapped coins that are often given to children and used to play games with dreidels.

If you can find gelt made with dark chocolate, you could be doing your body some good while enjoying a treat.

According to AuthorityNutrition.com, 100 grams of dark chocolate with 70-85% cocoa can provide lots of important minerals including iron, manganese, magnesium and copper as well as a bunch more. Dark chocolate also contains fiber to help with digestion and satisfaction.

Dark chocolate is high in antioxidants and can promote a healthy heart, cholesterol and blood flow. It may even benefit brain function.

Kwanzaa is newer holiday that was created in America as a way to remember African culture and pass on customs to younger generations.

Traditional meals are often foods that are native to Africa. Because of that, Kwanzaa probably has some of the most varied and healthiest holiday dishes. 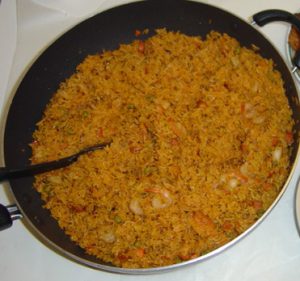 This popular West African dish consists of a long-grain rice such as Basmati (or African rice if you can find it and want be extra authentic).

Jollof Rice is sometimes called Benachin – which translates to “one pot.” That’s because you add tomatoes, onions and a bunch of spices such as cumin, nutmeg, ginger and chili pepper to one big pot of rice. Sometimes other vegetables are added as well as additional spices. It’s really up to the chef.

There are lots of potential health benefits to talk about. For one thing Basmati rice is probably the healthiest white rice.Â  Brown rice always wins for nutritional content, but Basmati provides many minerals and B vitamins niacin and thiamin. Basmati rice is also less likely to cause a spike in your blood sugar in comparison to other varieties.

The tomatoes in Jollof Rice provide Lycopene and other nutrients, while the onions give you Quercetin and more! Even the herbs and spices used in this dish can promote good health. For instance, the cumin could support your digestive system and so can nutmeg. Plus, nutmeg may also promote sleep. 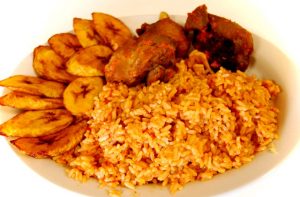 Fried plantains are delicious and are a common dish all over Africa. If you’re unfamiliar with them, plantains look a lot like bananas, but they are actually a vegetable and are always cooked before eating.

Plantains are considered to be a “superfood.” They provide fiber and beta-carotene as well as Vitamin C, calcium and potassium – all three of which can support bone health.

You can also treat plantains more like potatoes and cut them up into oven-baked french fries. Get some plantain recipes and tips from this Pinterest board. 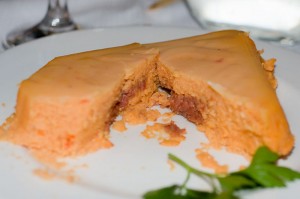 According to the Congo Cookbook, Moyi-Moyi is like a pudding made of black-eyed peas and other beans. The site says Koki is a similar dish, but it is more common in Cameroon, while Moyi-Moyi is from Nigeria. Both dishes are customarily served in a banana leaf.

Black-eyed peas – like many beans – are an excellent source of plant-based protein and are another way to get more fiber in your diet. They also contain minerals like zinc, potassium and iron.

These dishes will also include onions, chopped sweet peppers and chili peppers.

Bonus tip – In some cultures, it is believed that eating black-eyed peas on New Year’s Day will bring you good luck! 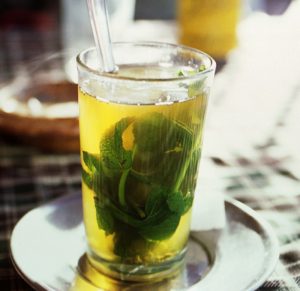 If you’re a health-nut, you probably know all about the potential health benefits of drinking green tea.

It’s an excellent way to get those important antioxidants into your system – specifically, powerful antioxidants known as catechins. Christopher Ochner, PhD. even told WebMD that green tea is “the healthiest thing” he can think of.

You probably think of Asia not Africa when it comes to green tea – and that’s somewhat true. But Africans added their own twist with some mint leaf. It’s often calledÂ Maghrebi mint tea, and sometimes Gunpowder tea, which is common in Morocco, Tunisia and Algeria. In fact, some Chinese green tea with mint leaf is actually marketed as Moroccan Mint Tea.

So with this healthy beverage you’ll get the heart and brain support and more from green tea along with digestive system support from mint.

Do You Have Healthy Holiday Traditions?

There are probably many other ways to make your holiday eating habits a little healthier.

What does your family do? Leave us a comment and tell us about your favorite food traditions and let us know what the health benefits are.