You are here: Home › Our Blog › Ginkgo Biloba Uses: Benefits, Risks, and More
By Angela Halderson, RD on April 24, 2018 in Diet, Nutrition Supplements 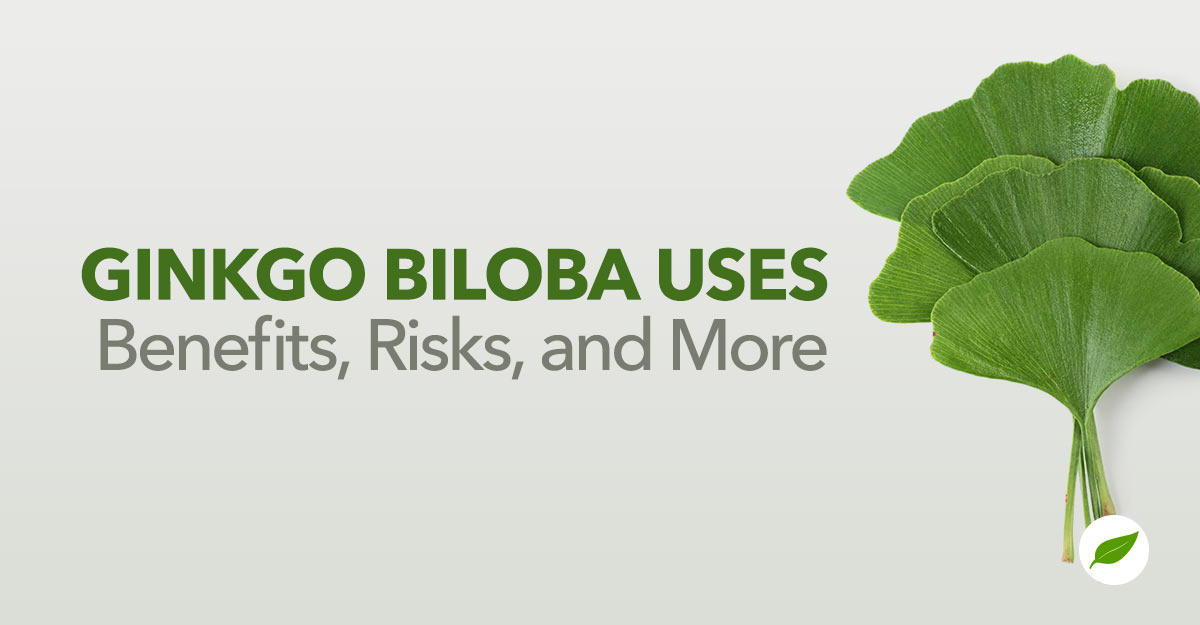 Ginkgo biloba, also called Maidenhair Tree in reference to its voluptuously shaped leaf, is one of the most ancient trees known to humanity. Some people are drawn the very beauty of the leaf itself. Just as many are repelled by the stinky seed, which is poisonous when eaten raw. Yet, for centuries humans have been going to the leaf extract for its potential medicinal benefits.

In its processed state, ginkgo biloba contains flavonoids and terpenoids which speak primarily to the herbâ€™s potential to support cognitive health. Other potential ginkgo biloba uses include supporting circulatory function and sexual health. For these potential benefits and more, ginkgo is commonly taken in the form of a capsule, liquid extract or tea.

One of the main uses of taking ginkgo biloba is for its potential to promote healthy blood flow. Healthy circulation is necessary for the various parts of the body to function optimally, especially oneâ€™s extremities. Ginkgo is sometimes taken to prevent painful symptoms that occur from poor circulation in the legs. Only when the bodyâ€™s circulatory system is working properly can blood do the necessary job of carrying oxygen and nutrients to the bodyâ€™s organs.

Ginkgo biloba may also support blood flow in a manner that supports brain, eye, and ear health. However, it is important to note that individuals with certain circulatory challenges are encouraged not to take ginkgo, or at least to consult a medical professional before doing so. Â Ginkgo has shown to be connected to blood health, and it is thought that one should not take the supplement while also taking medication for blood clotting. However, ginkgo might help individuals with a normal circulatory function to experience a range of potential benefits from healthy blood flow.

Ginkgo Biloba is sometimes referred to as a â€˜brain herbâ€™ due to its various potential uses regarding cognitive health. Ginkgo has earned a reputation for bolstering oneâ€™s memory. However, most conclusive studies with ginkgo biloba have focused on elderly individuals with declining mental acuity. The extract Egb761, for instance, has been shown to ease the mental decline of elderly individuals in one extensive study.

Ginkgo is also sometimes taken for areas of concern where both cognitive health and the central nervous system may be at play. Ginkgo has been taken to combat against feelings of dizziness from high altitudes. The herb has also been studied for its potential to soothe general feelings of nervousness. Some people have also found ginkgo to support against challenges of staying focused.

Because ginkgo biloba can aid in blood flow, the herb has been known to support aspects of sexual health in both men and women. Ginkgo influences nitrous oxide systems and has a relaxant effect on smooth muscle tissue. For men, taking ginkgo may support a more optimal blood flow that leads to the desired level of sexual response. For women, taking ginkgo may support a healthy sexual response where other factors of cognitive health are concerned.

Ginkgo has also been taken to give temporary relief to women from pain caused by menstrual pain. One 2009 study spoke very positively of ginkgoâ€™s potential to ease the severity of menstrual symptoms in women. Menstrual symptoms, of course, are not only the cause of extreme physical pain, but can lead to strains in cognitive health as well.

Potential ginkgo biloba uses are impressively wide-ranging. And itâ€™s no wonder given the speciesâ€™ longevity on the planet. The herb continues to be the focus of serious study so that we can better understand the inner workings of this ancient plant. Ginkgo is full of surprises and may contain just the flavonoids and terpenoids your body craves to fill nutritional gaps in your cognitive, circulatory or sexual health.