You are here: Home › Our Blog › How Ginkgo Biloba Benefits The Heart and Brain
By Angela Halderson, RD on December 14, 2017 in Nutrition Supplements 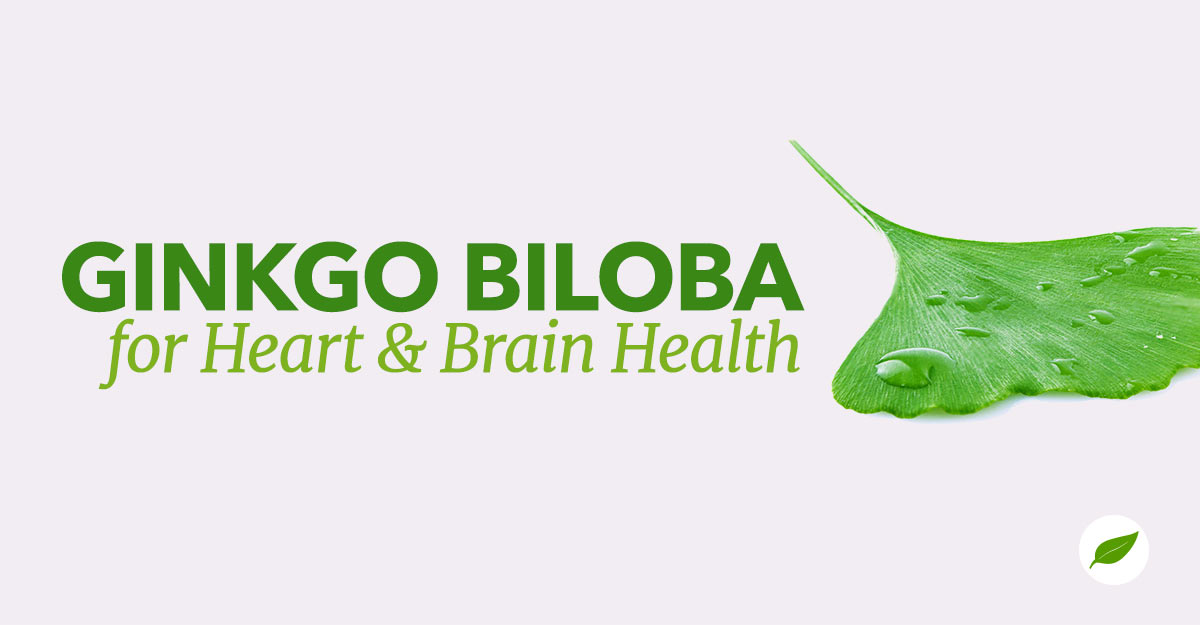 Ginkgo biloba is the type of herb with quite the reputation beyond its potential medical benefits. Itâ€™s often recognized as having a pungent odor thanks to its seeds that grow without the protection of a shell wall. The ginkgo leaf is considered very beautiful and has been the inspiration for jewelry adornments. On top of these facts, ginkgo biloba is an incredibly old species; single trees in Japan have been known to live for thousands of years.

The herb has been a mainstay in natural medicine for centuries, primarily in cognitive and vascular health.

A standardized extract of ginkgo biloba, called EGb761, has been the focus of numerous studies which have found the extract to support healthy blood flow through arteries, veins, and capillaries. Additionally, Ginkgo has been touted as a â€˜brain herb.â€™ To enjoy these potential benefits, the herb can be taken in supplement form as a capsule, tablet, liquid extract, or dried leaf for tea.

When it comes to gauging the potential ginkgo biloba benefits for cognitive health, some researchers have called for broader, more comprehensive studies. Yet the herb is still considered to show â€œpromising evidence for improvement in cognition and function.â€ The extract Egb761 has been reported to ease the cognitive decline of healthy elderly individuals. While itâ€™s a fact of nature that we lose mental sharpness with age, itâ€™s comforting to know nature has provided herbs that can potentially make that process more graceful.

The herb has also been shown to be effective in treating elderly individuals who express signs of regressed mental acuity. 240 mg daily has been shown to be a proper dosage for people in this group. A 120 mg dose of Ginkgo biloba is considered to be on the low end for healthy individuals, according to WebMD. Beginning at a dose of 120 mg, healthy individuals are encouraged to consult a medical professional before potentially increasing their dosage to as much as 600 mg daily.

Ginkgo biloba has also been shown to support the function of dopamine and norepinephrine pathways in animal studies. In humans, dopamine and norepinephrine are neurotransmitters that have a wide range of influence on your well-being. For example, dopamine is generally associated with the bodyâ€™s pleasure response, while norepinephrine is involved in pain, cognition, mood, emotions, movement and blood pressure. The connection between Ginkgo and neurotransmitters is a key reason why Ginkgo biloba is sometimes referred to as a â€˜brain herb.â€™

Ginkgo biloba is sometimes taken for temporary relief from leg pain that can occur after exercise. This pain is thought to occur due to poor circulation to a personâ€™s extremities, primarily by the narrowing of arteries. In some individuals, exercise puts an undue strain on the body. One might feel pain and numbness in leg muscles, a discoloration of skin tissue, or an inconsistency of temperature in oneâ€™s legs. A potential ginkgo biloba benefit is that it is thought to support blood vessels in a way that would keep the above unwanted symptoms at bay.

Ginkgo biloba has been studied extensively for possible connections with vascular health. In general, the herb has been found to be both healthy and effective for individuals whose vascular function in their legs is not optimal. Having blood vessels that are not working optimally can affect unexpected areas of the body. For instance, some individuals experience a nagging ringing or buzzing sound in their ears that is thought to be connected to blood vessels working poorly. Ginkgo has been taken to protect against these unwanted symptoms, sometimes with moderate results.

Itâ€™s clear there are potential ginkgo biloba benefits beyond serving as a fashionable piece of jewelry. Science continues to mine what this ancient tree has to offer our well-being. Donâ€™t be fooled by the obnoxious odor of its seeds. The real fruitfulness of this herb is found in the leaf where the potential to support your cognitive or vascular vitality awaits.