You are here: Home › Our Blog › 10 Healthy Game-Day Recipes and Tailgating Tips
By Theresa Groskopp, CN on September 13, 2013 in Health Tips 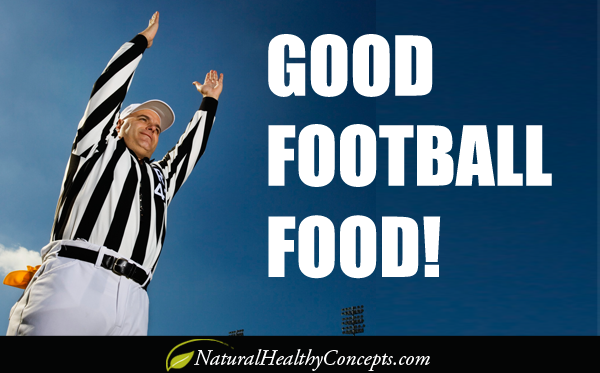 The NFL football season is underway. All across the country folks will pack stadiums and gather in living rooms to watch America’s most-popular sport.

Sunday afternoons featuring football also tend to be filled with quite a bit of food. Typically – it’s not always the healthiest of choices that are served up. But your party doesn’t have to be that way…

Check out these 10 ideas for making your game-day festivities delicious as well as nutritious. 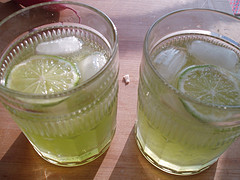 Sure, beer goes good with football. However, if you’re planning to toss back a couple while watching the game, but you’re watching your caloric intake too, you may want to try this refreshing drink suggested by Women’s Health Magazine.

It’s a simple cocktail made up of vodka (one of the lowest calorie alcohols) mixed with lemonade, tonic water and fresh lime juice. You could also used a flavored vodka.

This drink ends up being about 80 calories, while the typical beer could be twice as many calories.

If you’re wondering about specific calorie information for other types of beer, wine and alcohol here’s a good resource with a fun name. Check out GetDrunkNotFat.com. 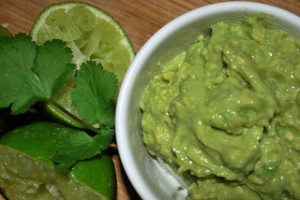 Some spicy guac is a great game day snack. The main ingredient – avocados – just happen to be super nutritious.

According to the website World’s Healthiest Foods, the avocado is packed with anti-oxidants, lycopene and beta-carotene. But if you want to get the most nutrition into your guacamole – they recommend peeling avocados using what’s known as the nick-and-peel method.

Basically, many of the nutrients are found in the dark green flesh near the skin, and you don’t want to waste it. 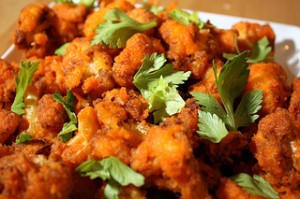 Buffalo chicken wings are a favorite of football fans. You can replace the meat with cauliflower and make a meal that’s much healthier.

These bite-sized morsels of Buffalo spice will make your guests’ mouths water. They’re breaded and smothered in sauce. Then you can serve them up with celery sticks, and no one will miss the chicken.

When properly cooked, cauliflower also has some important health benefits including being high in fiber and antioxidants as well as a bunch of B vitamins. 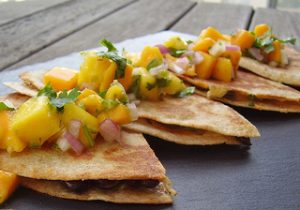 Beans are another great way to get some protein when you’re cutting out meat. And if you’re already mixing up some guacamole – Black Bean Quesadillas make the ideal main dish.

Besides being high in protein, HealthDiaries.com has a list of 6 Health Benefits of Black Beans – which include heart health, digestion support and improved blood sugar regulation.

You can make this dish vegan or vegetarian. It all depends on if you decide to add that gooey cheese or not. 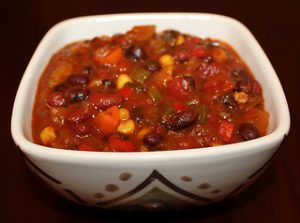 A bowl of chili and a football game in the fall go together like Batman and Robin in the Bat-cave.

Of course, one of the main ingredients is usually a lot of ground beef. Want to avoid that? There are a ton of chili recipes made for vegetarians and vegans with all of the spice and none of the meat.

That beef can easily be replaced by a mix of your favorite beans. Plus, throw in some veggies like carrots, onions and bell peppers for more flavor and nutrition. 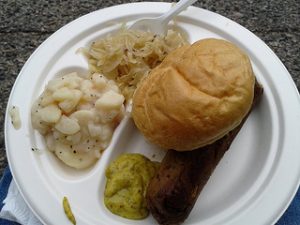 I know what you’re thinking – “Vegan bratwurst? What?! Is that even possible?”

Turns out it is…

We found one homemade bratwurst recipe on the blog Vegan Dad. He uses seitan (Wheat gluten) so it’s not celiac-friendly. But it is also packed with white kidney beans, shittake mushrooms and a blend of spices. 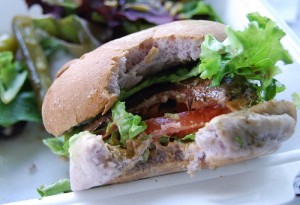 It’s tough to find a substitute for a char-grilled burger, but a scrumptious portabella mushroom is about as close as you’ll get.

An article from Reader’s Digest suggests some impressive health benefits. Mushrooms like the portabella are packed with phytochemicals, which may help prevent cancer. They also contain plenty of nutrients including as much potassium as an average-sized banana.

This is the perfect, healthy dish for tailgating football fans. You can throw them right on your Smokey Joe grill. But first, make sure you marinate them so the mushrooms are full of flavor. 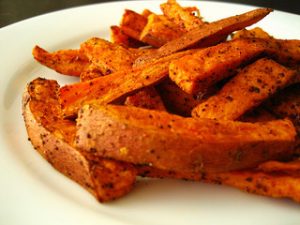 At one point, I wasn’t a fan of sweet potato fries or coconut oil – two things that tasted sweet when they were supposed to be salty. But my tune has changed.

Sweet potato fries are easy to make at home and coconut oil is the perfect and super healthy thing to make them with.

I usually just cut up some nice, long slices (as uniform as you can make them). Then I coat them in coconut oil and season with simple salt and pepper. Bake at 425-degrees for about 20 minutes.

You can also get creative and come up with your own special seasoning.

Coconut oil is considered one of the healthiest foods on the planet. Check out this infographic on the Amazing Health Benefits of Coconut Oil 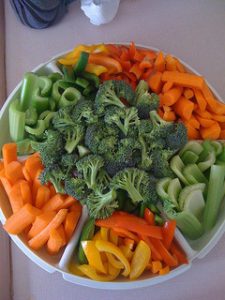 Raw vegetables can be a satisfying snack. And if you’re a nervous eater who likes to crunch on something when the game goes into overtime – this is a lot better than a bag of chips.

The only downside to the traditional veggie tray is the typically unhealthy dip.

Never fear – their are many healthier dips you can try with your carrot sticks, cucumbers and pepper slices. Food.com has a recipe for the Best Vegan Ranch dressing, but youÂ will need some vegan mayo.

There are healthier dips for your chips too. For instance, Care2.com has five ideas for you – from Cashew Queso to Mango Salsa. 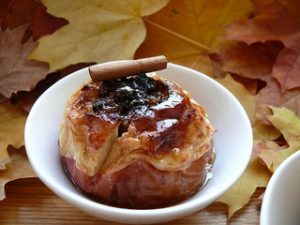 The game is over. Your team won and it’s time to celebrate. If your team lost – what better way to drown your sorrows than in a sweet treat?

Early fall is the perfect time to pick apples. They are all over the place right now. In addition to traditional apple pie and apple crisp – you can make this simple yet succulent desert.

Here’s how my mom would make them:

What I always loved was how the raisins soaked up moisture from the apple and plumped up in the oven. This is a fun way to top of your healthy game-day dining.

How Do YOU Eat Healthy During Football Season?

Got some good game-day recipes of your own? Tell us about them in the comment section below!

We want to hear how you keep tailgating and football feasts healthy and tasty!