You are here: Home › Our Blog › What Is Functional Medicine?
By Jackie Peters on January 4, 2017 in Health Tips 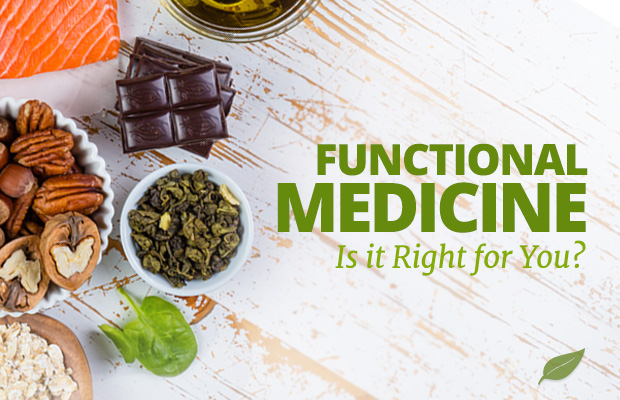 You may have heard more of the term “functional medicine” lately due to its growing reach. And, you may have wondered each time what exactly it’s all about. I was in the same boat, so I thought I would do some digging to finally get an answer.

To do my due diligence, I took a look at it from both sides ?Â advocates and dissenters ? to get a more comprehensive, unbiased understanding of functional medicine. Here is what I learned:

What Advocates Say about Functional Medicine

Functional medicine is a different approach to diagnosing and treating disease. Much like Merriam-Webster’s definition of the word “functional” ? used to contribute to the maintenance of a larger whole ? suggests, the “functional” approach involves treating the entire individual, rather than concentrating on a specific symptom or two.

By looking at the root causes of disease, functional medicine practitioners seek to restore balance and normal function for the patient. These causes typically fall into three categories: gene interactions, lifestyle, and the environment. Getting to the causes involves a very relationship-driven, systems-oriented approach that practitioners and patients call a therapeutic partnership.

An exam involves collaboration. The practitioner works with the patient to obtain their entire life history and family history, as well as nutrition and other lifestyle information. It also includes a physical exam and lab work. These tools help the practitioner locateÂ core clinical imbalances that hinder normal function.

Jeffrey Bland, PhD, known as “the father of functional medicine,” explains it this way:

We need to move beyond asking what drug will treat the symptoms, and instead ask what mechanism creates altered neurochemical or neurobiological function or systemic physiological change.

Advocates say that by shifting from the traditional symptoms/disease-centered focus to one that digs down into the causes, we can better address the widespread chronic illness that’s affecting Americans.

“This approach is a fundamentally different way of solving medical problems, one that allows us to decipher the origins of illness and identify the disturbances in biology that lead to symptoms.” A practitioner needs an understanding of: the body as a system, the dynamic way our genes interact with environment, the causes of illness, the bodyâ€™s basic functional systems and how they can malfunction, how to restore balance, and the connections between symptoms and organs (rather than separating diseases into specialties). Additionally, “Functional Medicine incorporates the latest in genetic science, systems biology, and understanding of how environmental and lifestyle factors influence the emergence and progression of disease.” (Source)

The proponents are quick to point out the growing rates of medical errors, chronic disease, and poor morale within the conventional medicine arena. Indeed, it could also be argued that the current medical paradigm is failing.

In a recent article from CNN, “US life expectancy drops for first time in 22 years,” it states “the 10 leading causes of death remain unchanged,” and despite the fact that the United States spends more on healthcare per person than at least 12 other high-income nations, we experience lower health outcomes. Besides the decline in life expectancy, this includes higher rates of chronic conditions and infant mortality. We don’t even make the top 25 for the World Health Organization’s Ranking of the World’s Health Systems. There are 36 other countries whose citizens are healthier than ours.

What the Opposition Says

It probably comes as no surprise that many conventional medicine advocates do not embrace functional medicine. Let’s take a look at their argument:

The dissentÂ centers around their general belief that functional medicine is unscientific and often based on anecdote. The unease comes from its claims of wide-ranging curative abilities for a lot of diagnoses that aren’t very well characterized (e.g., fibromyalgia, multiple chemical sensitivity, chronic fatigue, etc.). Those who suffer with such diseases have become frustrated that “modern” or “Western” medicine hasn’t offered them enough, and they feel overlooked ? and eventually, they are.Â It can also be frustrating for these doctors who feel that they don’t have much to offer these patients because these diagnoses usually lack much in the way of physical findings. Then patients hear about functional medicine, with itsÂ simple cure that takes the whole person into account. It plays into the exact frustrations these patients have with the larger system. (Source)

Here’sÂ more from Wallace Sampson, a retired physician who thinksÂ functional medicine is based more on emotion than science, and has written multiple articles for the website Science Based MedicineÂ to discredit functional medicine. It should be noted thatÂ this website takes a very unfriendly view of all things natural, from supplements to acupuncture and chiropractic.Â This commentÂ pretty much sums up his position on functional medicine:

So with this entry, I finally see what functional medicineÂ really is ― a non-scientific, ineffective, jingoistic, cultic approach to dysfunctional somatiform, non-disease conditions.

Is Functional Medicine for You?

I learned through my research that many of the doctors who practice functional medicine today had significant health conditions and felt that mainstream medicine had failed them. They did their own research, worked with integrativeÂ MDs, got themselves better and pursued functional medicine to help others. Here are just a few:

In 2014, the highly esteemed Cleveland Clinic in Ohio opened a functional medicine center and it is thriving today. Many years ago, medical practices like washing your hands before a delivery or newborn incubators were ridiculed and shunned, is it possibleÂ functional medicine will be the standard of care in the future?

Only you can determine if functional medicine is right for you. Ask yourself what it is you want from your relationship with your doctor, and remember you have choices. Keep looking until you find the doctor that’s right for you!

After all, your health really is the best investment you’ll ever make!

If you have worked with a functional medicine practitioner, we’d like to hear about it. Please share your experience in the comments section below.

One Response to What Is Functional Medicine?