You are here: Home › Our Blog › Another Fukushima Nuclear Meltdown is Possible – Should You Be Protecting Your Health?
By Theresa Groskopp, CN on January 4, 2014 in Health News 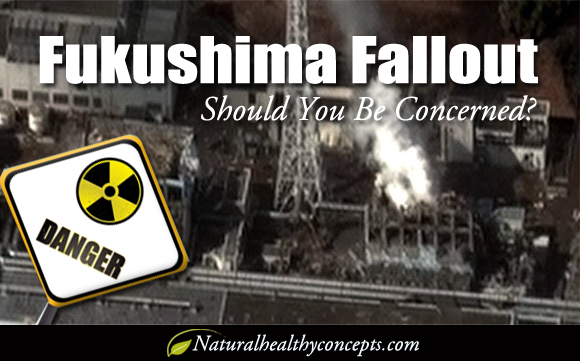 It’s been nearly three years since a deadly tsunami and earthquake hit Japan. But concerns over potential health risks are only beginning to be exposed.

The 2011 disaster caused a nuclear meltdown at the Fukushima power plant. After being damaged by the tidal wave, the plant began leaking radioactive materials into the atmosphere and the water.

In July of 2013, it was revealed that Fukushima was still releasing radioactive water into the ocean – even though TEPCO (Tokyo Electric Power Company) initially denied this was happening. Now it admits that 300 tons of contaminated water has been leaking into the ocean every day. (Read more)

TEPCO is using water to cool the damaged reactors, which no human can go near without suffering life-threatening consequences. The problem is that the power company is struggling to contain the contaminated waste water.

Most recently – there’s word that Fukushima may be facing yet another meltdown. Late in 2013, it was revealed that radioactive steam was coming out of one of the damaged reactor buildings. (Read more at The Ecologist)

TEPCO isn’t sure what is causing the release of steam – because no one can safely go inside to take a look. However, a meltdown is one of the possibilities, and some say it’s the most likely one.

While there are definite health concerns at stake for the people of Japan, there are also many questions about the risks for people on the other side of the Pacific Ocean – particularly in Hawaii and the West Coasts of the United States and Canada.

Potentially radioactive water is expected to reach the West Coast in spring of 2014. But it is quite unclear whether this will have any direct effect on people in North America.

One opinion article from The Californian states that radioactive water has already reached the shores of Alaska.

“…where hundreds of dead sea birds are washing up. Seals, polar bears, and other mammals have sores, are losing fur, and have internal damage.”

Yet some experts say it is more likely that the water will be too diluted to cause any noticeable damage to people and animals on the West Coast.

Senior scientist Ken Buesseler of the Woods Hole Oceanographic Institution has been monitoring radiation levels in the ocean near Japan. He predicts the water will pose no threat when it reaches the West Coast.

However, Buesseler also feels the U.S. should be doing more to monitor the situation surrounding levels of radiation in the water, and he’s trying to convince lawmakers to take action. Buesseler told the Cape Code Times…

“We don’t have a U.S. agency responsible for radiation in the ocean. It’s really bizarre.”

Even though Buesseler doesn’t anticipate major concerns away from the coast of Japan, he does feel it’s important to make sure that’s truly the case.

What Are the Possible Health Concerns?

To understand the potential health impact of nuclear fallout from a disaster like Fukushima – all we can do is look back at similar events in history.

And there is only one other disaster that measures up. That is the Chernobyl nuclear disaster of 1986.

Chernobyl is considered the worst nuclear disaster in history, followed by Fukushima. Both have been classified as Level 7 Events – the highest classification for such catastrophes.

The risks for people in Japan are similar to that of Chernobyl. In 2013, the World Health Organization (WHO) reported that there is a 70% increased risk of thyroid cancer for girls living in affected areasÂ  – if they were exposed to radiation as infants.

A screening of children in the Fukushima region indicated 36% have abnormal growths in their thyroid glands. However, it is not yet known if this can be attributed to radiation exposure.

Recently, a group of 71 U.S. Navy sailors who helped in the aftermath of Fukushima filed a lawsuit against TEPCO. They claim they are suffering major health complications because of radiation exposure. The sailors’ illnesses allegedly caused by radiation poisoning include thyroid and testicular cancers, leukemia and brain tumors. (Read More on NavyTimes.com)

The sailors say TEPCO did not warn them of radiation dangers as the Navy sent aid to Japan following the tsunami.

Do We Need to Be Concerned in the United States?

The question that remains is whether people in the United States could be affected by radiation from Japan. It is a difficult question to answer – as it is practically impossible to choose what sources to believe.

With good reason – many people are skeptical of any reassurance from government agencies that they are completely safe. Yet it may also be wise to raise a suspicious eyebrow at sources making Fukushima seem like the end of the world.

The FDA says it has been testing imported food items since the Fukushima disaster. So far it has found only one sample of ginger with detectable levels – but those levels fell below what the FDA considers unsafe.

Forbes contributor Tim Worstall cited a paper examining levels of radiation in blue fin tuna near Japan. It found that a typical serving size of fish would deliver about the same amount of radiation as 1/20th of a banana. (View the Full Report)

But many others are not convinced – and see signs of trouble ahead that are being ignored.

For instance – GreenMedInfo.com lists 28 signs the West Coast may already be seeing negative effects of nuclear radiation from Fukushima.

Even if there are no immediate dangers from the fallout at Fukushima, there are respected experts who say the potential for future disaster is what we should really be concerned with.

Award-winning scientist David Suzuki recently stated in a public talk that if another major earthquake hits Japan, it could be much more devastating and global. He indicated it could mean the end of Japan and an evacuation of America’s West Coast.

â€œFukushima is the most terrifying situation I can imagine,â€ Suzuki said.

Hear more of the talk below. Suzuki’s comments can be heard at 2:52 in the video.

What Steps Can You Take to Protect Your Health?

If you are concerned about the possibility of radiation poisoning and its adverse effects, there are some natural ways to help your body.

The reason radiation exposure often leads to thyroid cancer is because disasters like Fukushima and Chernobyl release radioactive iodine.

Our bodies need iodine and it is stored in the thyroid gland. The ideas is that by taking Potassium Iodide pills, your body will have all the iodine it needs and it will not try to absorb more from potentially contaminated sources.

It’s important to note that too much iodine can lead to issues like hyperthyroidism and goiters. Unless exposure is imminent, you should avoid excess iodine if you have certain thyroid conditions. However, taking an iodine supplement is considered safe for most people.

Detoxing with a product composed of bentonite clay could help your body get rid of radioactive residue. It essentially draws toxins out of your body.

Natural Healthy Concepts offers products such as a Radiation Detox Bath from LL Magnetic Clay. You can also find a wide range of bentonite clay supplements, which can draw toxins out of your intestines.

After Chernobyl, spirulina was used to treat children who experienced long-term exposure to low levels of radiation.

Spirulina is a blue-green algae that has immune-boosting benefits and may protect against radiation. It does this by helping the body cleanse itself of toxic heavy metals such as radioactive cesium and stronium.

Keep in mind that spirulina is harvested from the ocean. Because of this, some have concerns that the algae itself could become contaminated – negating its effects.

Using coconut oil is a good way to promote the health of your thyroid.

Research shows it can boost thyroid function, reduce symptoms for those with thyroid issues and improve overall thyroid health. That makes coconut oil a good preventative measure – with or without the threat of radiation poisoning.

“I would say nearly any antioxidant is going to beneficial. Glutathione, N-Acetyl-Cysteine, Alpha Lipoic Acid in addition to the Turmeric.”

The fact of the matter may be that whether or not the nuclear fallout in Japan has the potential to affect your health is beside the point.

We live in a world where nuclear weapons and nuclear energy leave us with the possibility of a nuclear disaster. The threat is there and it is not going away.

HoweverÂ  – there are likely many other things that pose much greater immediate health concerns to Americans.

Following the events at Fukushima in 2011, natural health expert Dr. Joseph Mercola encouraged his patients and readers not to become panicked about health threats. In an article on Mercola.com he said…

“It is crucial to recognize the importance of remaining calm and avoiding panic, despite the dire outlook of the current situation…fear in and of itself may actually be one of the most dangerous side effects of this horrific tragedy.”

Indeed – it is believed that in the long run – negative psychological effects of stress following Chernobyl had a greater impact than anything else.

You can choose to take the health and safety of your family into your own hands. Do this by being prepared in the event of a nuclear disaster. But most importantly – take steps to live a healthy life no matter what the situation.