You are here: Home › Our Blog › Foods That Cross-React with Gluten: 24 Possibilities
By Theresa Groskopp, CN on October 28, 2014 in Health News, Health Tips 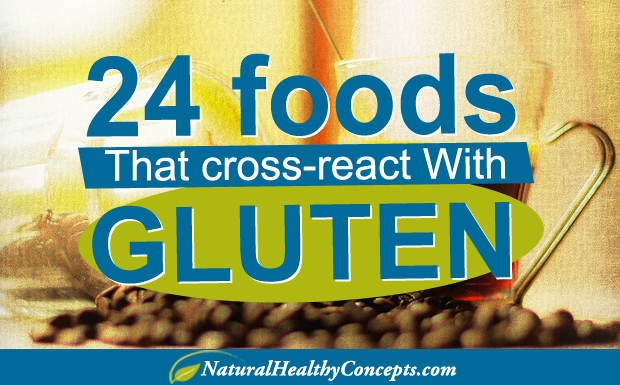 WhetherÂ you’re new to the gluten-free lifestyle, or have lived it for many years, you’ve likely seen at least one article on the Web that states there are foods that can cross-react with gluten while you were trying to educate yourself.

I came across five while getting ready to write this post. Yes,Â five. The general idea behind these particular posts is that a number of foods (19, but a few articles have more or less) all have protein structures that are very similarÂ to gluten. As a result of those protein structures, your weakened immune system can (and often will) confuse these foods with gluten and throw up a reaction to them. In other words, you’ll feel just like you would if you had eaten gluten.

Let’s look at this a little more closely.

The general list that seems to appear over and over across the Internet contains the following foods: 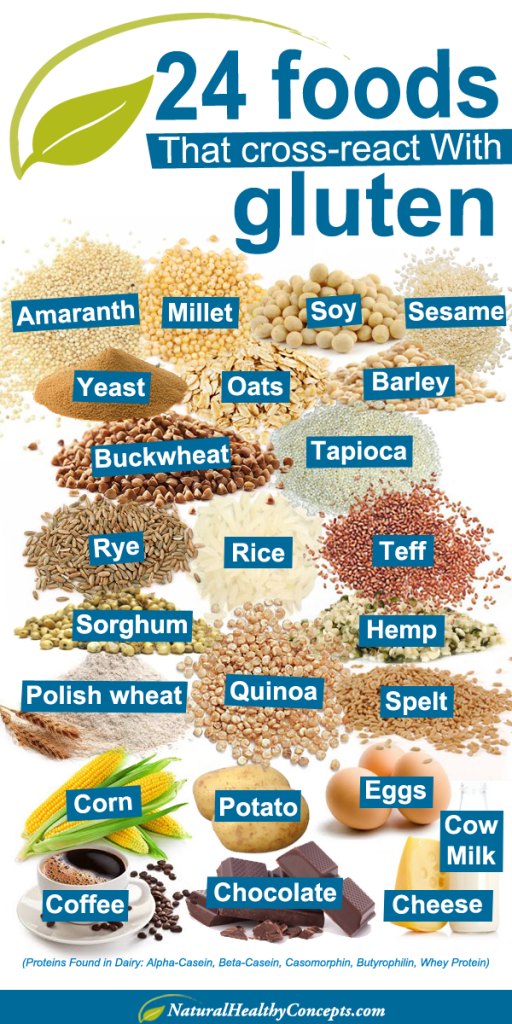 The basic premise behind this list is that if you’ve followed a gluten-free diet, but still feel as though you’ve eaten gluten, you may be experiencing one or more cross-reactions to something on this list.

Is that true? It certainly can be!

In 2013, a study by Aristo Vodjani and Igal Tarash (for Cyrex Labs, who offer cross-reactivity testing) appeared in the journal calledÂ Food and Nutrition Sciences titled “Cross-Reaction Between Gliadin and Different Food and Tissue Antigens.”

In this study, Vodjani and Tarash attempted to “determine whether symptoms could be due to cross-contamination with gluten-containing foods or cross-reactivity betweenÂ ?-gliadin and non-gluten foods consumed on a GFD [gluten-free diet].”

Without going into detailed specifics about the entirety of the study (which you can read for yourself at the link above), Vodjani and Tarash found that “milk, casein and milk-containing products such as milk chocolate should be thought of as containing gluten-like peptides, at least in individuals whose symptoms fail to improve significantly on GFD [gluten-free diet].”

So, no milk, no casein, and absolutely nothing that contains milk. If you’re a fan of milk chocolate, well, you may be in for a surprise.

But what about other items on the list? Well, according to the study:

While this study, along with the aforementioned list of cross-reactive foods has spread through the Internet like a wildfire, many have come out in opposition, stating that there are no studies that actually confirm the results that Vodjani and Tarash came up with.

As you would guess, this reaction led many to wonder if cross-reactivity was just a myth that was being spread as truth.

At the 2013 International Celiac Disease Symposium in Chicago, there was a panel session titled “Celiac Disease Myths Debunked.” The panel was comprised of a number of members of the medical advisory board for the Celiac Disease Foundation, including Drs. Stefano Guandalini, Don Kasarda, John Zone, Markhu Maki, Melinda Dennis, and Andrea Levario.

One of the “myths” they discussed, as you’ve likely guessed, is that of cross-reactivity with gluten-contaminated foods. One of my favorite GF bloggers, Erica from Celiac and the Beast, was in attendance and took some notes on cross-reactivity, among other topics.

When you search the Web, it seems that corn and coffee are two foods from above that many people worry over. Statements from the members of theÂ Celiac Disease FoundationÂ board, and notes from Erica and CATB say the same thing:

“Corn is safe and not cross-reactive. There is no scientific evidence to show it contains proteins that cross-react with gluten.”

It does need to be stated though, that it’s definitely still possible to have a corn sensitivity. If you’ve eaten corn and it makes you feel miserable, stop eating it. Cutting things from your diet if they make you feel awful is okay.

The same goes for the coffee you love.

“Coffee is safe and not cross-reactive. There is no scientific evidence to show it contains proteins that cross-react with gluten.”

Because the panel seemingly didn’t discuss differences (if there are any) between pure coffee and instant coffee, sticking to pure coffee seems to be the better plan. Be aware that coffee is a natural bowel irritant.Â For everyone, not just you.

When it comes to cross-reactivity with gluten, it’s hard to know what to believe. If you believe the results from the Cyrex Labs study, that’s great. If you choose to believe the top celiac doctors and researchers from the Celiac Disease Foundation who were on the ICDS panel, that’s great, too.

However, there’s one thing I think everyone with celiac disease and gluten sensitivity will agree on:

Always listen to what your body is telling you.Â

It’s possible for anyone to have a sensitivity to anything, including the foods that are mentioned above. Perhaps the best rule is to remove certain foods if they’re making you feel awful. It’s really one of the few ways you’ll start feeling better, especially since the only way to combat celiac disease is to follow a strict gluten-free diet. Right now, the only person who can make you feel better isÂ you.

What are you feelings on cross-reactivity? We’d love to hear your thoughts. Please leave us a comment below!

7 Responses to Foods That Cross-React with Gluten: 24 Possibilities