You are here: Home › Our Blog › FDA Guidance: What New Regulations Mean for You
By Theresa Groskopp, CN on August 29, 2016 in Health News, Nutrition Politics, Nutrition Supplements 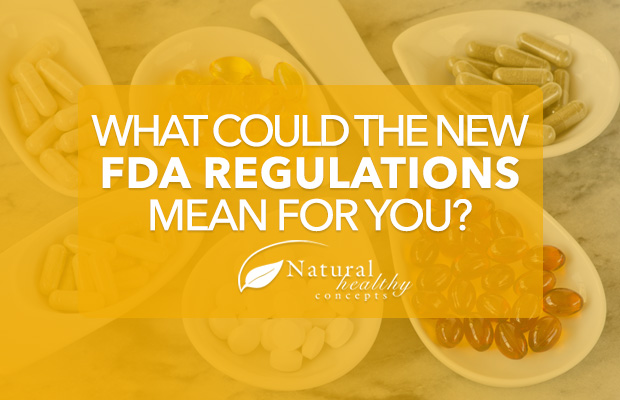 In the past month, the FDA released a guidance draft related to supplement regulation. Although you may think that these new rules and regulations wonâ€™t apply to you, these proposed changes could have a direct effect on the supplement industry andÂ your access to many different types of supplements.

A Brief History of Supplement Regulations

Supplement regulation is a popular topic of discussion, and it came to the forefront of the health world in 1994, when President Bill Clinton signed the Dietary Supplement Health and Education Act into law. Under DSHEA, supplements like vitamins, minerals, enzymes, and probiotics were officially classified as foods, rather than drugs. DSHEA was originally created to increase consumer access to dietary supplements.

In addition, companies need to acquire FDA approval when introducing a new dietary ingredient (NDI) into any supplement (a stipulation that includes essentially every supplement introduced after 1994) by submitting an NDI notification. TheÂ manufacturers are still responsible for determining safety and validity of their supplements, although they must comply with a set of safety guidelines the FDA has created. (Learn more about DSHEA and FDA approval in this post).

This law was further complicated by a 2011 update that included the Food Safety Modernization Act. TheÂ FDA also published a draft of guidelinesÂ that clarified what constituted an NDI, when the manufacturer or distributor should submit an NDI notification, the evidence needed to document an NDIâ€™s safety, and the methods for establishing the identity of an NDI.

-A full description of the identity and composition of the NDI and the dietary supplement in which the NDI will be marketed.

-A discussion of the basis for your conclusion that the substance is an NDI.

-An explanation of how the history of use or other evidence of safety in the notification justifies your conclusion that the dietary supplement containing the NDI will reasonably be expected to be safe. (source)

However, the backlash from these proposed updates was severe, and caused the FDA to rethink the draft. In the last month, the FDA has released their new draft guidance to regulate NDIs.

What Does the FDA Propose?

Among other changes, this new draft guidance would require any supplement makers to register an NDI 75 days before introducing the supplement into the market (with an additional 90 days before the approval is released to the public). It also offers updated information about what is considered an NDI, as well as suggestions for new testing and safety measures for NDI approval.

What Do These Changes Mean for You?

On the surface, this guidance doesn’t appear to have immediate consequences. However, if these new guidelines are adopted, it could result inÂ serious effects for the average supplement user.

One of the biggest criticisms of the guidance is that these new regulations may stifle the creation of new supplements, as new safety measures and testing procedures could be more costly and extensive. The definition of what exactly constitutes an NDI or â€œchemically alteredâ€ NDI is hazy at best, which could make it difficult when trying to test for safety.

Itâ€™s valuable to note that an NDI refers to a new supplement (as opposed to an IND, which refers to a new drug). With the current legislation, if an IND application is filed for a dietary ingredient, it cannot be included in a supplement unless an NDI has been previously accepted. For example, when the FDA declared pyridoxamine (a natural form of vitamin B6) a drug, this form of B6 became unavailable as a supplement (even though this form of vitamin B6 can be found in many foods). Even when an IND is rescinded, or when it does not lead to a new drug, the supplement form is still banned.

TheseÂ regulations could potentially restrict not only the types of supplements available to the public, but could also discourage new research in fields like functional medicine, the human microbiome, and epigenetics. Even as scientists discover more information about the potential benefits of supplements, the new regulations could mean that they could find their progress hindered or stopped entirely.

However, the guidance isn’t all negative. If an ingredient had been included in a supplement prior to 1994, it is grandfathered in and does not require an NDI, even if it is sold as a standalone supplement.Â For example, if a ginger supplement was sold with added ingredients like echinacea, the ginger itself wouldnâ€™t require an NDI, and neither would the echinacea.

Additionally, NDIâ€™s can be submitted as â€œmaster files,â€ which is a guide that provides detailed information about an ingredient. If a company uses the same ingredient in multiple products, they can submit one NDI for multiple products.

What You Can Do

If youâ€™d like to express your opinion on these proposed changes, you can contact your local representative or the FDA. TheÂ guidance is still in draft form, soÂ the changes have not yet gone into effect, which means there is still time to make your voice heard. If you want to get involved, you can take action here.

What do you think of these new regulations? Helpful or harmful? Let us know in the comments!

5 Natural Ways to Manage Psoriasis
Pregnancy & Supplements: What You Need to Know