You are here: Home › Our Blog › FDA Limits Lead in Beauty Products
By Leslie Benson on February 17, 2017 in Health News, Natural Cosmetics 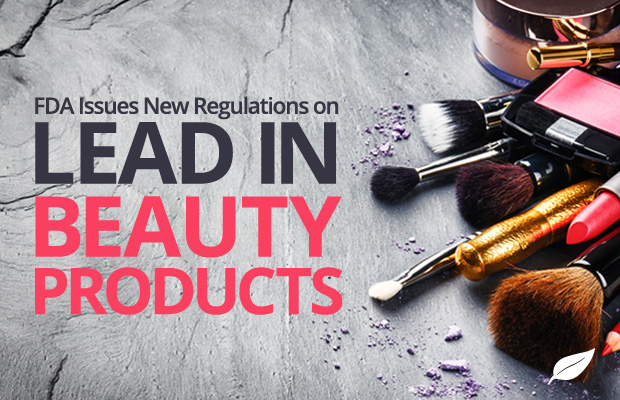 Learn more about the new FDA regulations limiting the use of lead in cosmetics.

Youâ€™ve heard of the dangers of lead-based paint, which the U.S. federal government officially banned from use in households in 1978, but did you know you might still be exposed to lead from the beauty products youâ€™re using on a daily basis? Thatâ€™s why the U.S. Food and Drug Administration (FDA) has issued new regulations limiting lead in cosmetics. Here are the details andÂ some ways to keep your family safe!

Itâ€™s horrifying to think that you may beÂ exposed to lead just by using your beauty products, such asÂ lipstick, eye shadow, blush, body lotion, mascara, foundation, body powder, compact powder, shaving cream and moreâ€”all of which have had very little regulation by the U.S. federal government. After all, itâ€™s a battle thatâ€™s been ongoing for more than 10 years!

In an effort to protect public health, The Campaign for Safe Cosmetics looked into the possibility of lead in beauty products in 2007, followed with more rigorous studies by the FDA over the following decade. Hereâ€™s what they found.

After an independent laboratory tested more than 30 popular brands of lipsticks for lead content, the Campaign for Safe Cosmetics released the report, A Poison Kiss, in 2007, which found that 61 percent of lipsticks contained lead, with levels ranging up to 0.65 parts per million (ppm).

Pressure from consumers and a letter from three U.S. Senators spurred the FDA to release a follow-up study in 2009 that found lead at levels ranging from 0.09 to 3.06 ppm in cosmetics, four times higher than those found in the 2007 study. Lead was found in a wide range of beauty products, including inexpensive drug-store brands and high-end, luxury brands. [Source]

The FDAâ€™s New Suggestion Not a Rule

Since 2009, the FDA conducted additional studies, finding lead in a total of 685 cosmetics on the U.S. market, including 20 of the lipsticks from The Campaign for Safe Cosmeticsâ€™ earlier study. Recently, in December 2016, the FDA finally released draft guidelines suggesting that cosmetic companies use less than 10 ppm lead in their products. The guidance does not apply to topically applied products, such as drugs or hair dyes.

According to the FDA, 99 percent of the total products they tested contained less than 10 ppm in their formulations. They confirmed that â€œalthough most cosmetics on the market in the United States generally already contain less than 10 ppm of lead, a small number contained higher amounts.â€

The FDA has since concluded that up to 10 ppm of lead in cosmetics is consistent with the maximum lead level for similar products recommended by other countries. This level is achievable with the use of good manufacturing practices and does not pose a health risk. [Source]

However, itâ€™s important to note that U.S. law still doesnâ€™t require cosmetics or their ingredients, other than color additives, to be approved by the FDA in order to be marketed and sold. The law also doesnâ€™t require cosmetic companies to share their safety data with the FDA. This leaves consumers potentially vulnerable to unsafe ingredients and manufacturing practices.

So what does this all mean for you?

Lead Exposure is Dangerous to Your Health

Despite the FDAâ€™s findings, many medical experts believe that there is no safe level of lead exposure. Lead is a natural element found the earthâ€™s crust, but the FDA has now classified it as an â€œimpurity.â€ As a neurotoxin, lead may be detrimental to your health, even in small doses.

Long-term exposure to lead has been linked to many health concerns, such as lead poisoning, which can become severe and even become fatal. Lead poisoning occurs when lead builds up in the body, often over months or years. With many women using common cosmetics such as lipsticks twice a day or more, this frequent, long-lasting exposure could have a negative impact on their health over the course of a lifetime.

Use Caution When Buying Cosmetics

As a consumer, itâ€™s important to protect yourself. Know what youâ€™re buying, and what ingredients are in the beauty products you use. Protect you and your family from lead in cosmetics by shopping for all natural, unleaded, mineral-based brands instead of conventional brands. Also look for products with the USDA organic seal on them.

Natural Healthy Concepts sells many natural makeup products and natural personal care products to meet your daily beauty routine, from mineral powdersÂ and other face makeup to lipsticks and everything in between. You can also protect yourself by using cosmetics less frequently and removing cosmetics from use by children, since their bodies are more susceptible to the developmental dangers of lead poisoning.

What natural beauty products do you use? What are other ways you are protecting your family from lead exposure? Share your stories in the comments below!

Can BCM-95 Curcumin Help With Depression?
Are Adaptogens Nature’s Answer to Healthy Sleep?