You are here: Home › Our Blog › Frankincense and Myrrh Health Facts
By Theresa Groskopp, CN on December 24, 2013 in Health Tips, Nutrition Supplements 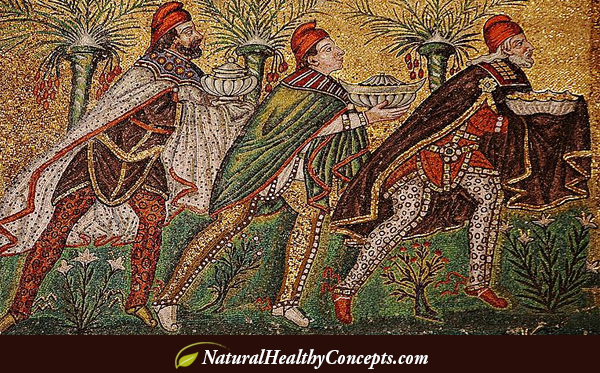 We’re all familiar with the three guys who started the tradition of giving gifts at Christmas.

In the New Testament of theÂ  Bible, the Magi (aka the Three Wise men) sought the Christ-child and brought him gifts: gold, frankincense and myrrh.

Now we all know gold makes a pretty nice gift – but what is it about frankincense and myrrh that makes them so valuable? Turns out…there are a lot of health benefits to these two gifts.

What Are Frankincense and Myrrh?

Frankincense and myrrh actually have a few things in common. They are both considered aromatic resins that come from the same plant family. Both are often used in aromatherapy. Frankincense literally means high quality incense.

Frankincense and myrrh are harvested from trees in the Commiphora family through a process called striping. Slashes are made in the bark of the tree to release droplets of sap, which are called tears.

The scent of frankincense is typically described as piney and lemony combined with a sweet, woody aroma. Myrrh has a slightly earthy scent that some say smells like black licorice. Both are often used in religious ceremonies today – just as they were many centuries ago.

But there’s much more to these two natural components than their fragrance.

For Stronger Immunity – Frankincense has anti-inflammatory properties. That means it can help reduce symptoms of respiratory issues such as asthma or a cough from the common cold.Â  It is also an anti-septic/disinfectant, so it helps your body fights off germs.

For Pain Relief – Typical body pain may also be improved with frankincense. It is used for headaches and sore muscles as well as PMS pain and reduction of arthritis symptoms.

For Your Skin & Hair – Frankincense has anti-aging properties, making it a nice addition to lotions and skin creams. It is an astringent than can strengthen the roots of your hair while toning and lifting skin to reduce the appearance of wrinkles.

For Improved Digestion – In your digestive system, frankincense can encourage the production of gastric juices like bile. It can also be used as a diuretic.

For Stress & Anxiety – As an oil, it can act as a sedative, promoting feelings of peace and relaxation.

For Better Nutrition – Frankincense can even help your body absorb important nutrients so you get all the benefits of your healthy diet.

Since they are similar substances, it’s no surprise that Myrrh has many similar health advantages to Frankincense. Like its close cousin – myrrh is an astringent, an immune booster and a sedative for aromatherapy. But it also has its own unique benefits…

For Fighting Infection – Myrrh essential oil has antiviral and anti-fungal properties. It can keep microbes from growing in your body and causing an infection.

For Getting Rid of a Cough – Myrrh can be an effective expectorant and an anti-catarrhal. That means it helps you get rid of phlegm and cough up excess mucus from a cold or other types of respiratory infection.

For Better Circulation – Myrrh can help improve blood flow so that nutrients and oxygen reach every part of your body. Better circulation can also mean better digestion and a sharper mind.

For Faster Healing – When applied to wounds, myrrh acts as a vulnerary, protecting you from infection and promoting healing.

Where Can You Find Frankincense and Myrrh?

Lucky for us, frankincense and myrrh are much easier to come by in modern times. You don’t need a wise man to bring it to you.Â  So we can literally treat ourselves like kings!

Natural Healthy Concepts offers a nice selection of products containing these ingredients. That includes essential oils, lotions and deodorants, as well as supplements.

Have you used frankincense or myrrh to benefit your health? What do you think of them as aromatherapy fragrances? Leave us a comment and tell us what you think!